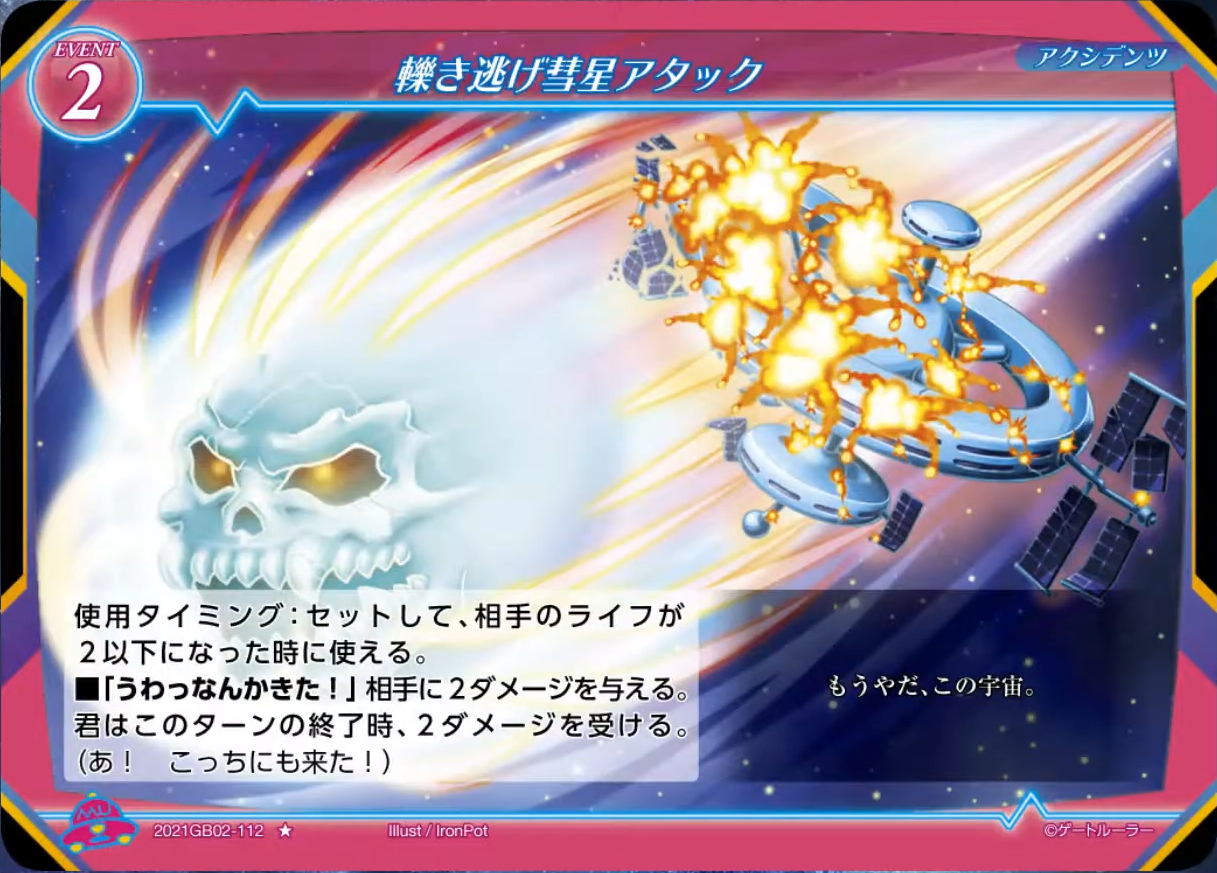 Hit and Run Comet Attack
Card Number: 2021GB02-112 ★
Faction: Wonderverse
Card Type: Event
Level: 2
Attribute(s): Accident
Effect: Use Timing: Set this, and use it when your opponent's life becomes 2 or less.
■ "Something just appeared!" Deal 2 damage to your opponent. At the end of this turn, deal 2 damage to yourself. (Ah! It came back!)
Flavor Text: I'm fed up with this stupid universe.
(Source)

For any Buddyfight players this design may be very nostalgic, as it is very reminiscent of the "Impact" card type, which were themed around powerful burn damage finishers, with various conditions that generally included a condition of the opponent needing life equal or less than the life the Impact dealt. Impacts had their problems though, primarily that, despite their intention to be flashy finishers, they tended to be anti-climactic and unsatisfying in real gameplay.

"Hit and Run Comet Attack" is a new application of the same idea, with a much better card design. To start, the damage it deals (and thus its activation threshold) is lower life than Impacts ever had, and it lacks the obnoxious "anti-interaction" clauses that were slapped on even the earliest of Impacts. Not only is it fully interactable, a part of what will save this from the anti-climactic fate of impacts is that should this fail to finish your opponent, due to CNT checks or your opponent just stopping the damage with "Flying Shield" or other such cards, the damage will come back to you, making the powerful finisher a double-edged sword.

Of course, it should go without saying for those familiar with Buddyfight impacts, but the appropriate cost relative to damage dealt, and the very limited timing preventing your opponent just topdecking into this at any time to play and finish the game, also make the card feel more fair compared to Buddyfight impacts.
Edited by HunterSerge on 16th March, 2021 at 7:56pm CST