Holy Swordsman of Golden Scales
Card Number: 2021GB02-004 ★★★★
Faction: Volnar
Card Type: Unit
Level: 3
Attribute(s): Warrior, Dragon
ATK: 3
HP: 3
STK: 2
Effect: ■ "Protection of Golden Scales" This cannot be chosen by your opponent's card effects.
■ "Infinite Combat Technique [Energy Ability]" When this attacks, choose up to 1 Combat Technique event from your graveyard and play it by paying Energy. Then, put that event on the bottom of the deck instead of the graveyard. (You don't pay any energy for level 0 events.)
Flavor Text: The war god's blessings are bestowed upon those with a worthy soul. 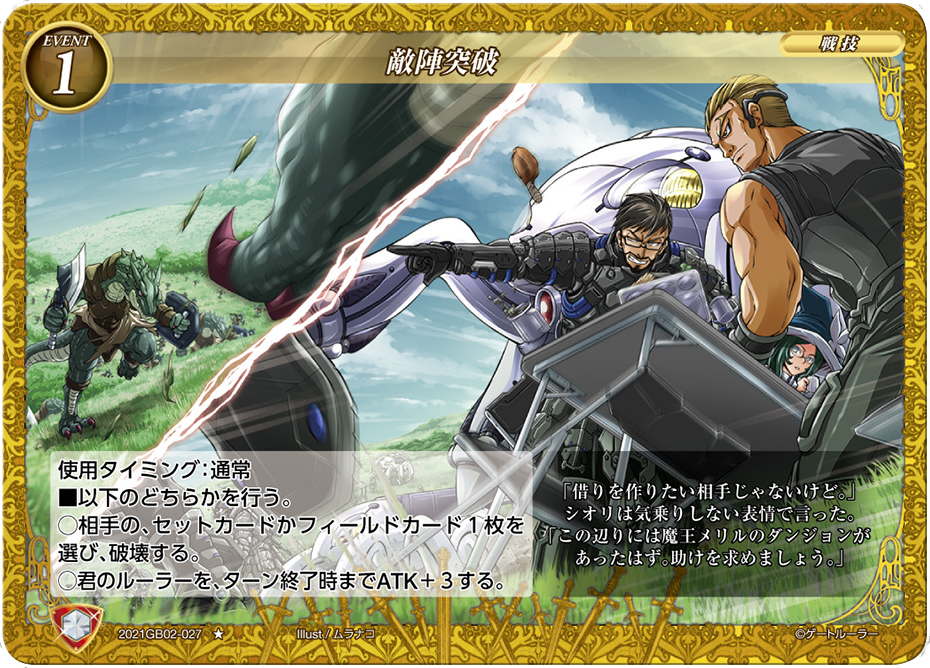 Break Through the Enemy
Card Number: 2021GB02-027 ★
Faction: Volnar
Card Type: Unit
Level: 1
Attribute(s): Combat Technique
Effect: Use Timing: Normal
■ Choose one of the following effects.
・Choose 1 of your opponent's set cards or field cards, and destroy it.
・Your Ruler gets ATK+3 until the end of turn.
Flavor Text: "He's not someone I want to owe a debt to," Shiori said, with a hesitant look. "But there must be a dungeon belonging to Demon Lord Merill around here. Let's ask for help."
(Source)

The final ★★★★ Volnar revealed! Expanding on the idea for Warrior that was first seen on "Chimerala", "Holy Swordsman of Golden Scales" boasts a repeatable on attack version of the same graveyard casting effect, while also having a powerful protection effect. It also boasts both the Warrior and Dragon attributes, meaning every Genesis Summoner currently printed can access it. That said, it seems like a card for a dedicated Warrior/Combat Technique deck, rather than a Genesis Summoning deck. The Dragon attribute is quite relevant though, in that it gives the strategy access to "Dragostrike". There are several level 0 Combat Technique events that boost stats, which will allow you to compensate for Swordsman's low stats, as well as capitalize on the difficult to remove nature given to the card by its protection effect.

"Break Through the Enemy" gives the Combat Technique toolbox a very useful new option in clearing your opponent's backrow. As far as backrow removal goes, the only thing that is this cheap is Yomajin Front's "All Sides Purification", and being able to double dip on that removal with "Chimerala" or "Holy Swordsman" will give the deck likely unmatched capability to deal with the opponent's sets and fields.

The second variable effect to boost the Ruler's ATK can also be very helpful for clearing as necessary. The deck seems like it would prefer Wizard, since the big focus on Combat Technique events would benefit well from the extra energy to more frequently be able to use the pricier ones during the opponent's turn, and a Ruler ATK boosting effect like this works well with Wizard, where your Ruler's STK isn't exceptional to begin with, so its no big deal to frequently use your Ruler to clear the board. 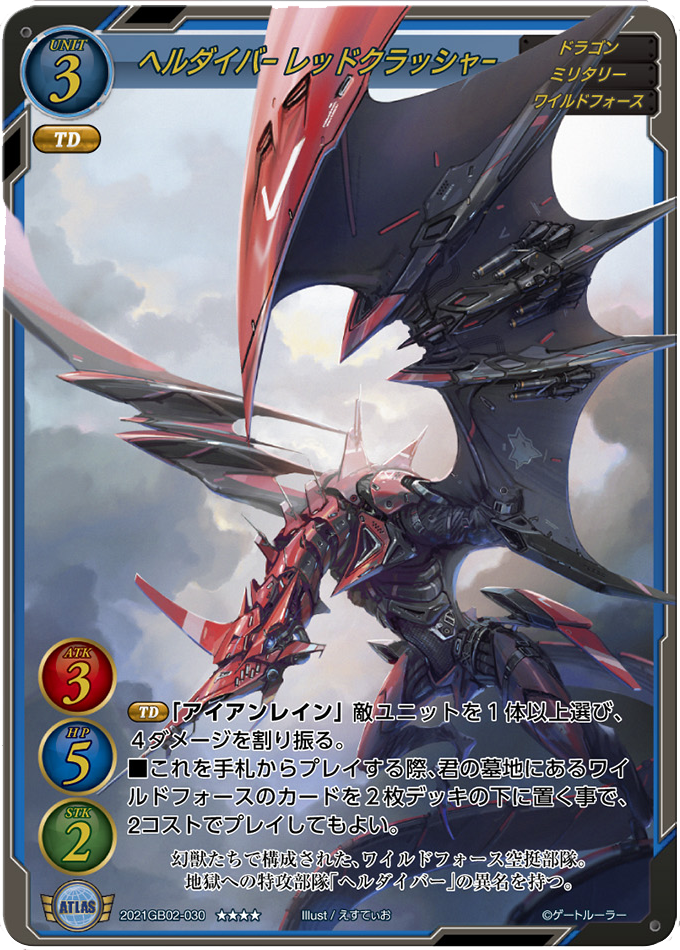 Hell Diver, Red Crusher
Card Number: 2021GB02-030 ★★★★
Faction: Wild Force
Card Type: Unit
Level: 3
Attribute(s): Dragon, Military, Wild Force
ATK: 3
HP: 5
STK: 2
Effect: [TD] "Iron Rain" Choose 1 or more enemy units, and distribute 4 damage among them.
■ When you would play this from hand, you may send 2 Wild Force cards from your graveyard to the bottom of your deck to play this as a 2 cost.
Flavor Text: Wild Force's Sky Corps, which is composed of sculpted beasts. They have the nickname of "Hell Diver", the special attack unit from hell.
(Source)

The other big reveal is a powerful new boss card for Wild Force "Hell Diver, Red Crusher"! It boasts the Dragon attribute, which might allow for some fun tech options. Its TD effect is similar to Busterkong's, but gives Wild Force an in archetype way to deal spread damage, and with its built in cost reduction, that comes cheaply. It boasts a bulky HP stat as well.

Fueling the cost reduction effect won't be too difficult, and will be something of a benefit itself. Wild Force cards include 3 solid CNT cards in "Busterkong", "Big Owl", and "Buster Arm", and the recently revealed "The Secret Weapon" works well with all of these if you want to get them out of your hand. Beyond that, the Wild Force attribute is also on strong event cards like "ATLAS Army Normandy Exercise" and "I didn't even feel that!" making it simple to fill your graveyard without depending on units dying or checking CNTs.
Edited by HunterSerge on 22nd March, 2021 at 4:44pm CST