Posted on 22nd March, 2021 at 7:16pm CST
The first of today's reveals is the March 22nd influencer reveal, from the Youtube channel "JacK". 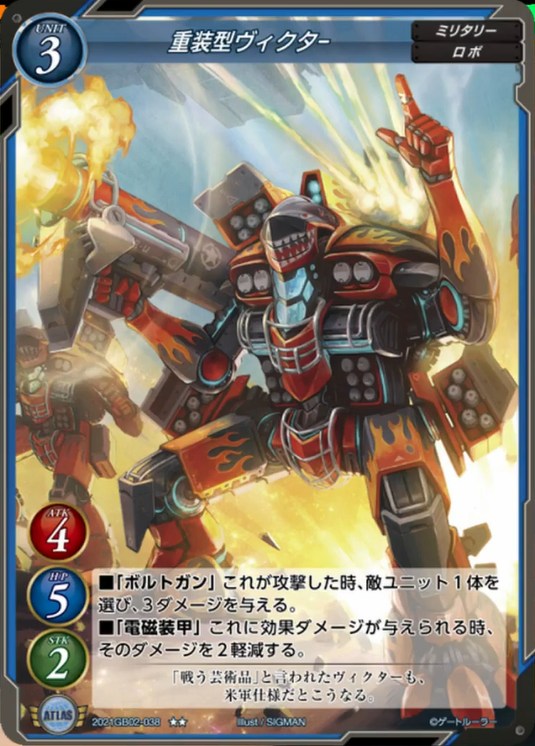 Heavily-armed Victor
Card Number: 2021GB02-038 ★★
Faction: ATLAS
Card Type: Unit
Level: 3
Attribute(s): Military, Robo
ATK: 4
HP: 5
STK: 2
Effect: ■ "Bolt Gun" When this attacks, choose 1 enemy unit, and deal 3 damage to it.
■ "Electromagnetic Armor" When effect damage is dealt to this, the damage is reduced by 2.
Flavor Text: Victor, who is called a "fighting work of art", appears like this under the US Military's specifications.
(Source)

A powerful new form of Set 1's Victor! In exchange for being a Level 3, Victor gets a much beefier HP stat, higher damage for its on attack ability, and an incredibly powerful protection effect which will reduce the damage of powerful removal like ZAPZAPZAP! and Buster Arm to a point that Victor can survive. 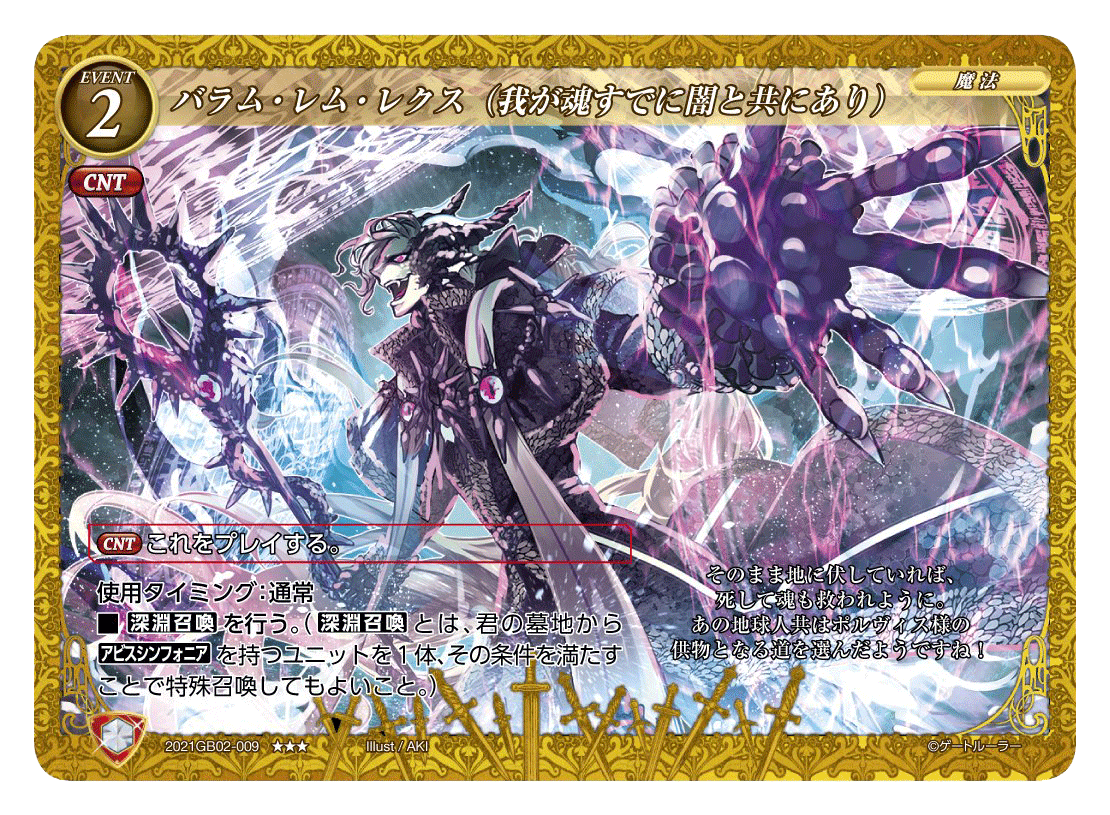 Balam Rem Rex (My soul is one with the darkness)
Card Number: 2021GB02-009 ★★★
Faction: Volnar
Card Type: Event
Level: 2
Attribute(s): Magic
Effect: [CNT] Play this.
---
Use Timing: Normal
■ Perform [Abyssal Summoning]. ([Abyssal Summoning] means to choose 1 unit from your graveyard with [Abyssal Concerto], and you may special summon it by fulfilling its conditions.)
Flavor Text: If you lay down on the ground, you will die and your soul will be saved. It seems these earthlings have chosen that path, and have become Master Rex's lowly posessions!
(Source)

Another new powerful Abyssal Summoning option! This time its an event with absolutely no risk of being disrupted by removal. In exchange, similarly to Johan, it does not provide a Darkness to your graveyard itself. Not being a Wizard, it pairs poorly with "Dark Mother", so its a card you'd want to run with "Voltona".

Of course, it also has a CNT to play itself, which when triggered at the right time, can be highly disruptive, playing a Vastorus Rex or Viola Fluvdus to remove a unit that had not yet attacked, or even just getting a new unit in your defensive zone. However, the rather specific timing you need to damage this at for it to successfully disrupt makes that applicable not the best aspect to focus on, and will likely not be the main value of the card. 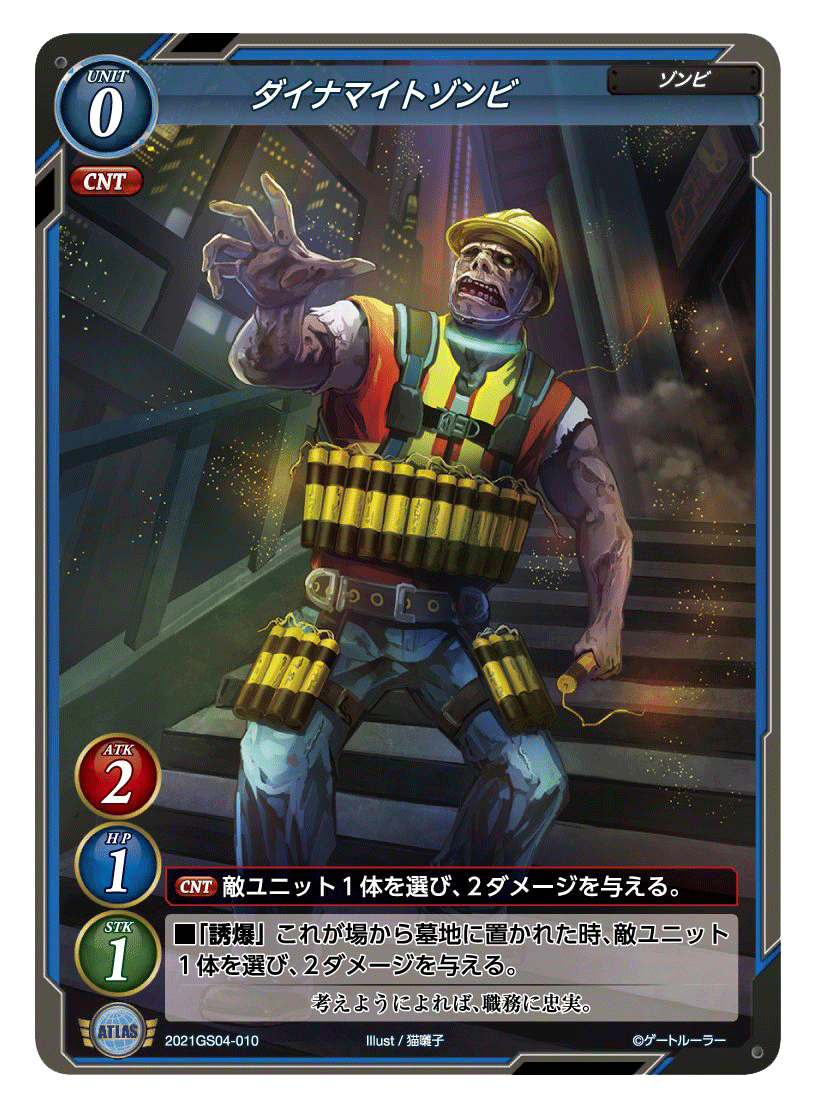 The other twitter reveal is a powerful Zombie card that is said to be a key piece of the deck, and it certainly seems to live up to that! Being a level 0 makes this an excellent revival target, as your many revival events will always be able to bring it back and able to reuse its powerful effect. It can be used proactively by summoning something else on top of it, or sit it in the defensive zone to force your opponent to deal with. And then we have its strongest application, which is sacrificing it to activate Zombie Cannon, either getting 6 total unit damage for a 0 cost ZAPZAPZAP or Buster Arm, or dealing 2 unit damage and 1 direct damage also for 0.

Lastly for today is the final Set 2 influencer reveal, the one for March 23rd, revealed by Vtuber "Higata Kyoichi". 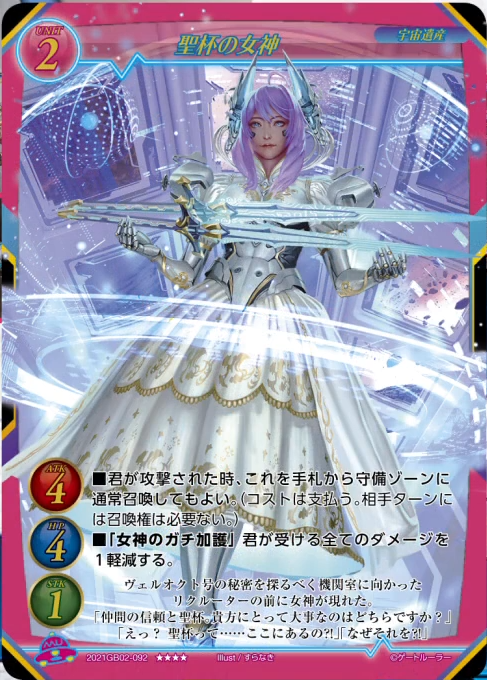 Goddess of the Holy Grail
Card Number: 2021GB02-092 ★★★★
Faction: Wonderverse
Card Type: Unit
Level: 2
Attribute(s): Galaxy Heritage
ATK: 4
HP: 4
STK: 1
Effect: ■ When you are attacked, you may normal summon this from your hand to a defensive zone. (Pay the cost. No Summon Cap is spent during the opponent's turn.)
■ "The Great Blessing of the Goddess" All damage dealt to you is reduced by 1.
Flavor Text: When Recruiter went to the engine to learn the secrets of the Velocto, the Goddess appeared before him.
"What is more important to you, the trust of your friends or the Holy Grail?"
"Huh? The Holy Grail...is it here?!"
"Why did you come here then?!"
(Source)

Another in the line of cards similar to Set 1 Alice! More expensive than other cards of its ilk at Level 2, but has 4 HP making it more likely to survive the 1st attack. Most importantly, this card has a valuable effect while on the field, able to neutralize burn damage, as well as forcing your opponent to deal with it if its in an attacking zone, or it'll dampen every swing they make.
Edited by HunterSerge on 22nd March, 2021 at 8:37pm CST