Posted on 23rd March, 2021 at 11:25pm CST
This is the last batch of Set 2 reveals before the full set list drops at 5 PM JST today! There's around 50 cards left to be revealed, so it'll be a bit before we can get them all up, so be sure to join our discord to see the translations as they drop.

For today's reveals, we have 2 reveals from the official twitter. 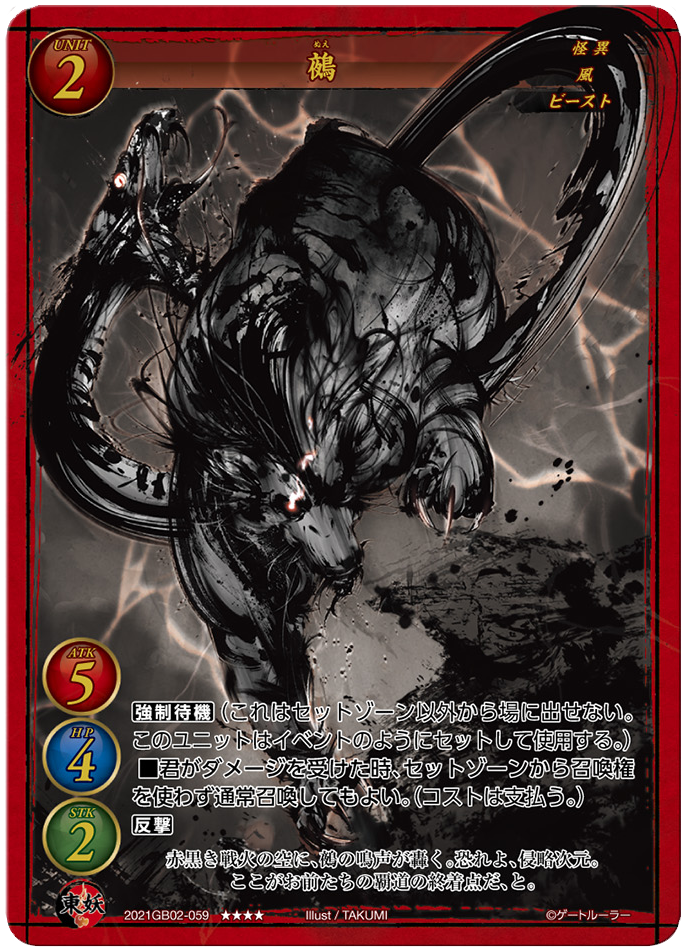 Nue
Card Number: 2021GB02-059 ★★★★
Faction: Yomajin Front
Card Type: Unit
Level: 2
Attribute(s): Apparition, Wind, Beast
ATK: 5
HP: 4
STK: 2
Effect: [Forced Standby] (This card can only be played in the set zone. This unit is set and used as an event.)
■ When you are dealt damage, you may normal summon this card from a set zone without spending Summon Cap. (You still pay the cost.)
Flavor Text: Tremble, Exvaders. Your supremacy ends today.
A new card reveal from Booster Pack 2 "Evil God Invasion".

This is the Yomajin Front unit "Nue". Its a card with a variety of uses, from playing it in the defensive zone to protect your Ruler after a unit damaged you, to playing it offensively to the attack zone after your attack activates a burn damage CNT.

A powerful defensive card! With Retaliate combined with the Beast attribute, you can utilize stat gain to pressure your opponent with a threatening defensive unit that is out of range of Ruler attacks. 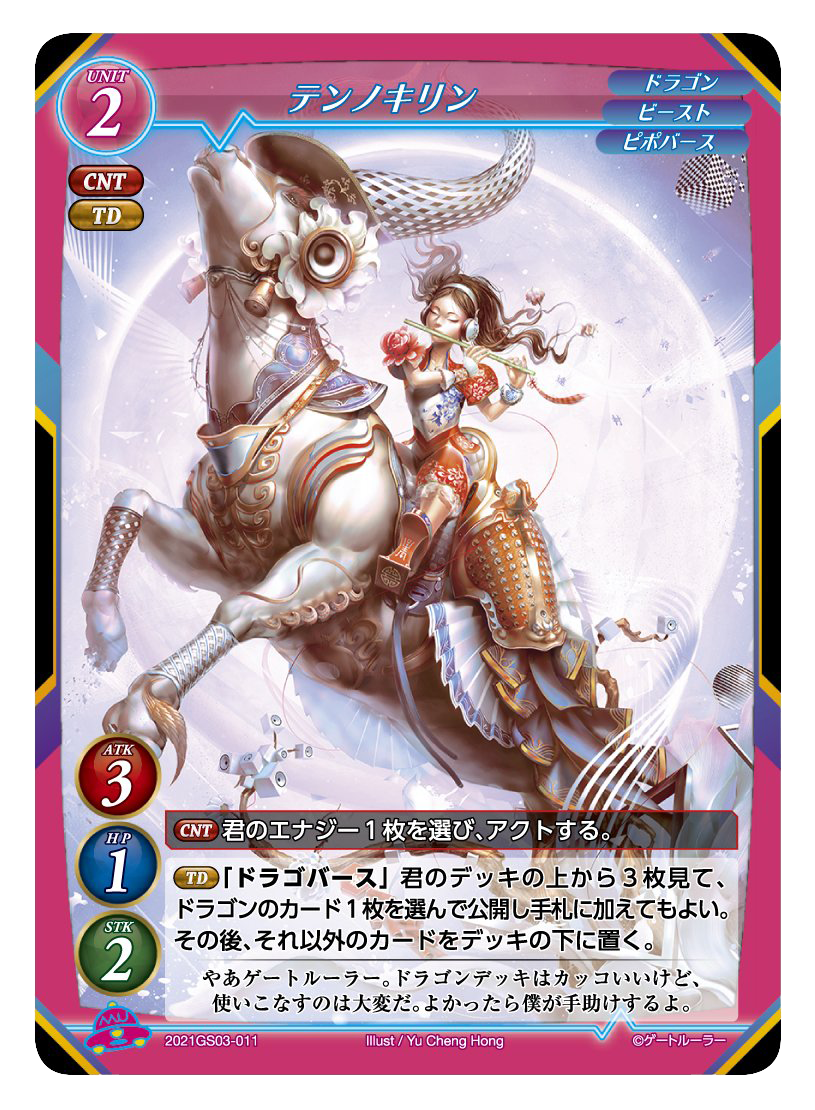 Heavenly Kirin
Card Number: 2021GS03-011
Faction: Wonderverse
Card Type: Unit
Level: 2
Attribute(s): Dragon, Beast, Pepoverse
ATK: 3
HP: 1
STK: 2
Effect: [CNT] Choose 1 of your energy, and activate it.
---
■ [TD] You may look at the top 3 cards of your deck, choose 1 Dragon from among them, reveal it, add it to your hand, and put the remaining cards on the bottom of your deck.
Flavor Text: Hello, Gate Ruler. The Dragon deck is cool, but its difficult to master. I'll help you out, if you'd like.
Introducing "Heavenly Kirin", a key card from the Starter Deck "With the Dragon King".

Its a kind of effect that is rare in Wonderverse, one that increases your hand size, and it also has an energy supporting effect, so it is likely to increase the likelihood of seeing Wonderverse in Knight and Wizard decks.

A very powerful support card for Wonderverse! It has the standard 2 cost for these cards that give card advantage, but in the context of Wonderverse, that cost can be easily reduced! Canhel will let you play it for only 1, and Space Raptor will let you play it for free. And after using its powerful TD effect to increase your hand, there are a number of ways to combo with it, from using Butterfly Effect to swap Kirin for another Level 2 like Verklight, or with Canhel already on your field from a previous turn, after playing Kirin for 1 energy, you can then play Findar or Detonizer for 2 energy, and feed Kirin to their Enhance effect!

The remaining 7 of today's reveals come from a video on the official channel featuring a Zombie deck facing off against an Emissary of Ruin deck. 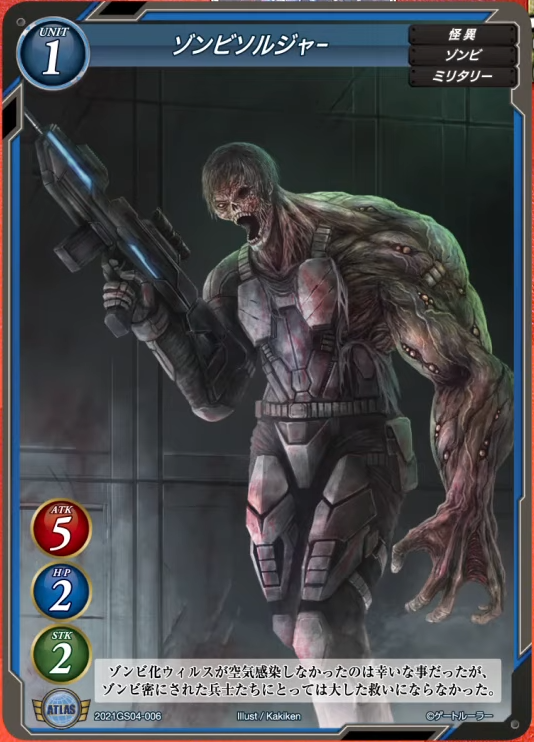 A Zombie clone of Champ Tiger. As promised early on, this is the 2nd unit that has both Zombie and Military, allowing Zombie Rider to get +2 ATK and +2 HP from its presence. While its much more vulnerable to removal compared to Zombief, it should be useful as a good way to clear boards. As an example, when you use Newtech Laboratory, you can revive this and a Cheerleader Zombie so Soldier will have 6 ATK and will be able to clear many powerful units like Grand Galac. 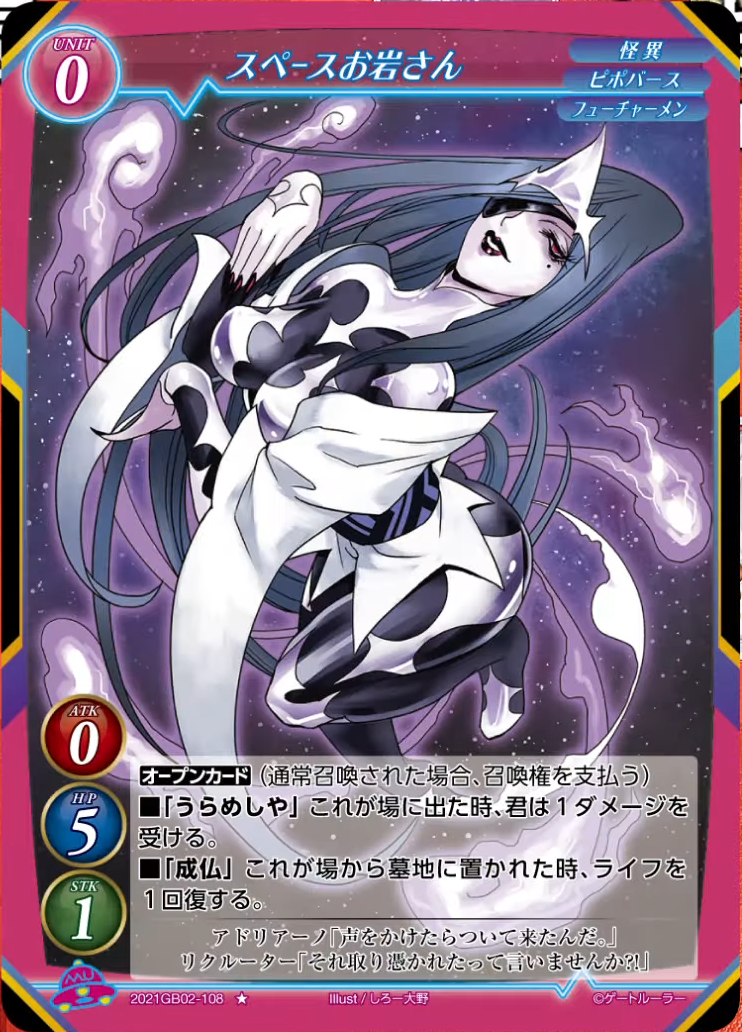 Space Ms. Oiwa
Card Number: 2021GB02-108 ★
Faction: Wonderverse
Card Type: Unit
Level: 0
Attribute(s): Apparition, Pepoverse, Futuremen
ATK: 0
HP: 5
STK: 1
Effect: [Open Card] (If it is normal summoned, you spend Summon Cap.)
■ "Envy" When this enters the field, deal 1 damage to yourself.
■ "Road to Heaven" When this is sent from the field to the graveyard, you recover 1 life.
Flavor Text: Adriano: "I called out, and he followed me."
Recruiter: "Didn't you say it was too scary?!"

A potent generic Wonderverse unit! As a mere Level 0, it gives you a 5 HP defensive zone unit, and allowing you to get an extra damage check. There is a slight risk of it only damaging you and not getting the heal, but the types of removal that would allow this to happen are extremely limited right now. 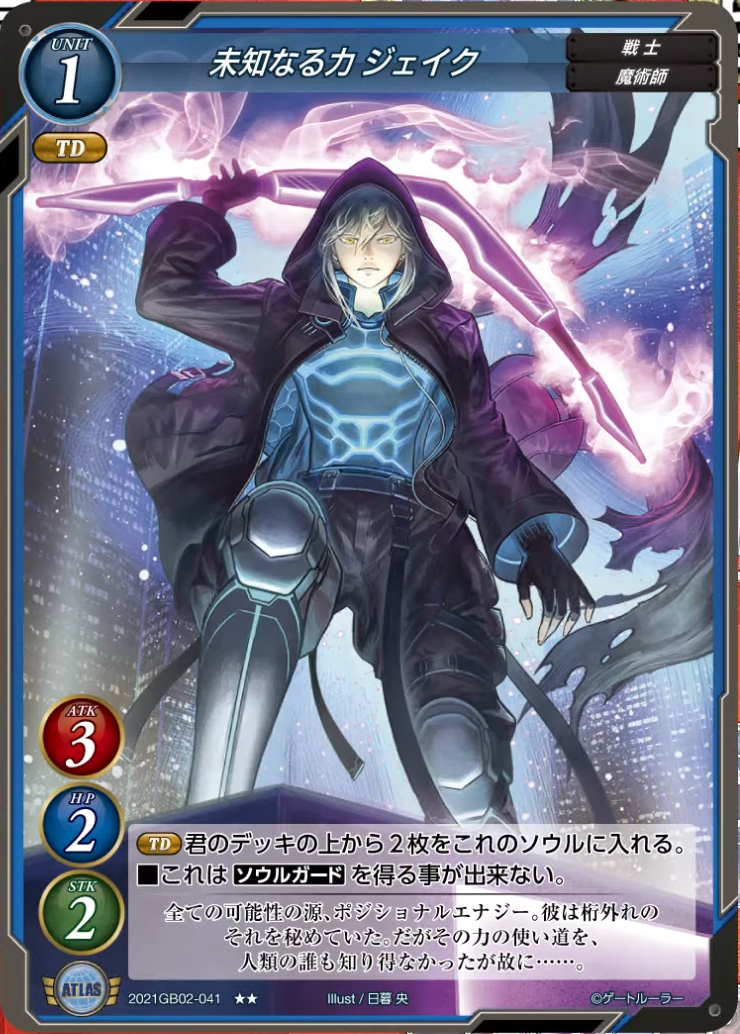 Unexplored Power, Jake
Card Number: 2021GB02-041 ★★
Faction: ATLAS
Card Type: Unit
Level: 1
Attribute(s): Warrior, Wizard
ATK: 3
HP: 2
STK: 2
Effect: [TD] Put the top 2 cards of your deck into the charges of this.
■ This cannot get [Charge Shield].
Flavor Text: Positional energy, the source of all possibilities. He had an extraordinary amount of it. However, because no one among humankind knew how to use this power...

A support unit for the Emissary of Ruin archetype! He provides an easy 2 charges for the archetype to utilize with their various charge dumping effects. Perhaps there will be another archetype that can make use of these charges, but given the flavor text, it certainly seems like a card deliberately meant as support for Emissary of Ruin. 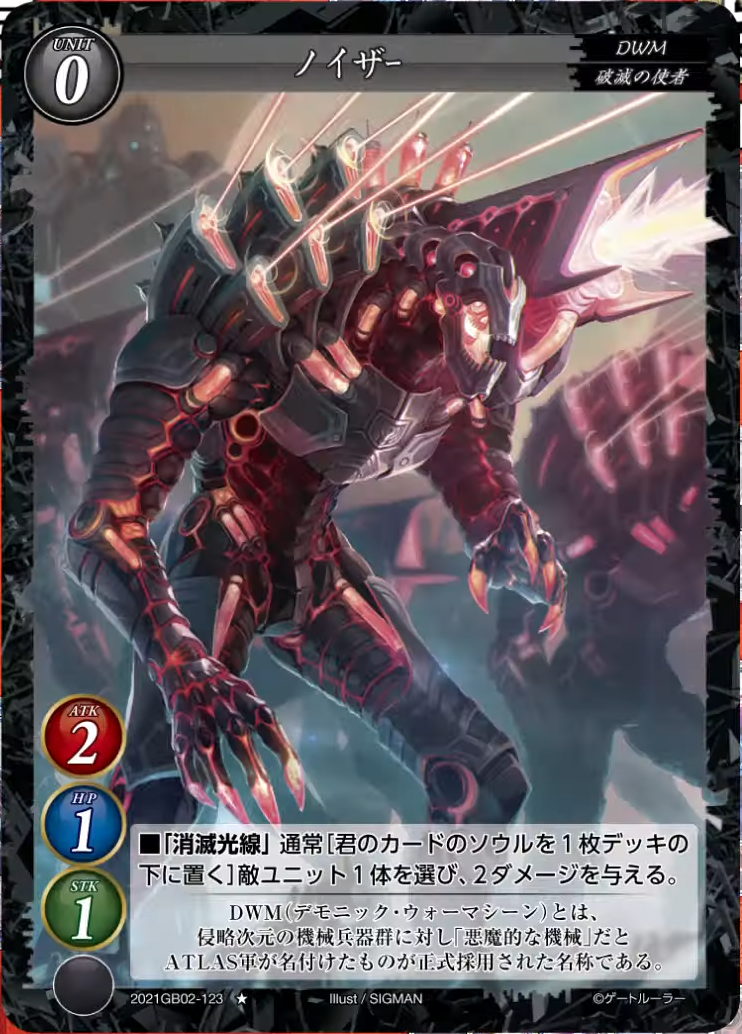 Noiser
Card Number: 2021GB02-123 ★
Faction: Exvaders
Card Type: Unit
Level: 0
Attribute(s): DWM, Emissary of Ruin
ATK: 2
HP: 1
STK: 1
Effect: ■ "Vanishing Ray" Normal: [Send 1 of your card's charges to the bottom of the deck] Choose 1 enemy unit, and deal 2 damage to it.
Flavor Text: DWM (Demonic War Machine) is the officially adopted name by the ATLAS army for a group of the Exvaders mechanical weapons that had been labeled "devilish machines".

A new charge dumper for Emissary of Ruin and an extraordinarily powerful one at that! Burning a unit for 2 as an on entry has only appeared on Master Future Ed, who has weaker stats, and certainly is not as spammable as Noiser is. It also combos very well with Vamha. While the previous Emissary of Ruin charge dumpers could do so as well, a total of 5 energy wasn't so practical, but with this unit, you only spend 2 energy, and get to deal 2 damage to another enemy unit when turning Vamha's temporary removal into a permanent one.

While being a Level 0 leaves it with much lower stats that are much more disruptable compared to the 7-8 HP of the higher level charge dumpers, the control pay-off is incredible. In addition to that, being a Level 0 its more recurrable with Wonderverse's Capture Beam. Wonderverse may end up being the best way to play this archetype, thanks to being able to use Schrodinger's Cat and Capture Beam to increase how often you can access your essential charge dumpers.

Lastly, this card may even end up seeing use outside of Emissary of Ruin, because its damaging effect just has that high potential. As has been mentioned many times already, its Level 0 makes it much easier to combo with, and its very possible a deck using Vamha, Jake, and Blue Titan as charge fuel for Noiser could pop up. 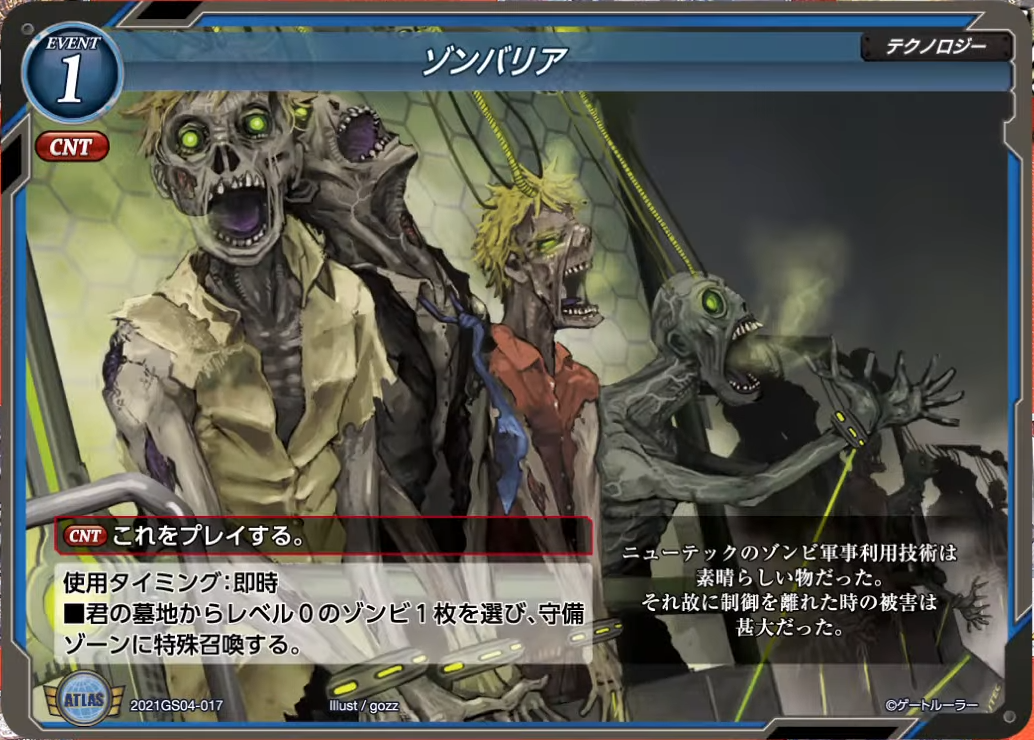 Yet another revival event for Zombies! This one lets you recycle Level 0s into your defensive zone. Primarily this will be useful to force your opponent to go through Dynamite Zombie and activate its unit damaging CNT multiple times in a turn, but could also be used to summon Cheerleader Zombie at Immediate speed to let an attacking zone unit unexpectedly survive an attack.

Given the CNT effect and Immediate speed of this event, its no wonder why Zombipocalypse had to get nerfed to only summon to attacking zones. 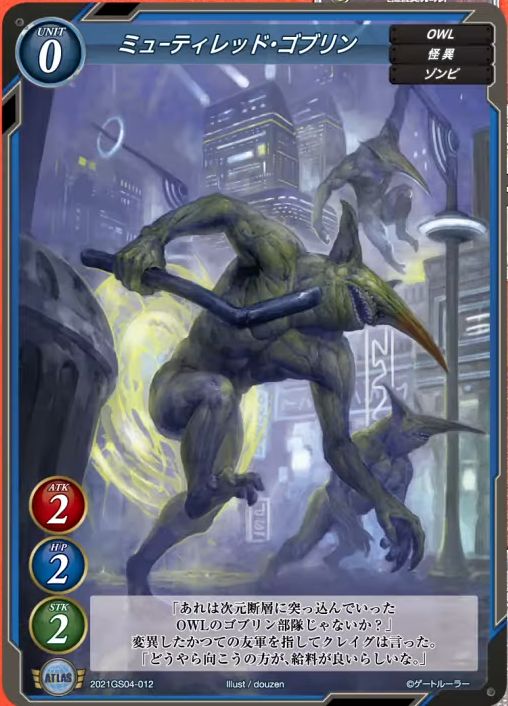 A Zombie clone of "Jinrai"! Since your revivals with Newtech Laboratory and Zombipocalypse will be most efficient summoning a level 0 + a level 1/2 (depending on the event), a quality line-up of level 0s is fantastic for the deck. Getting access to a 2 STK level 0 will be great for allowing the deck to push for damage when it wants to. 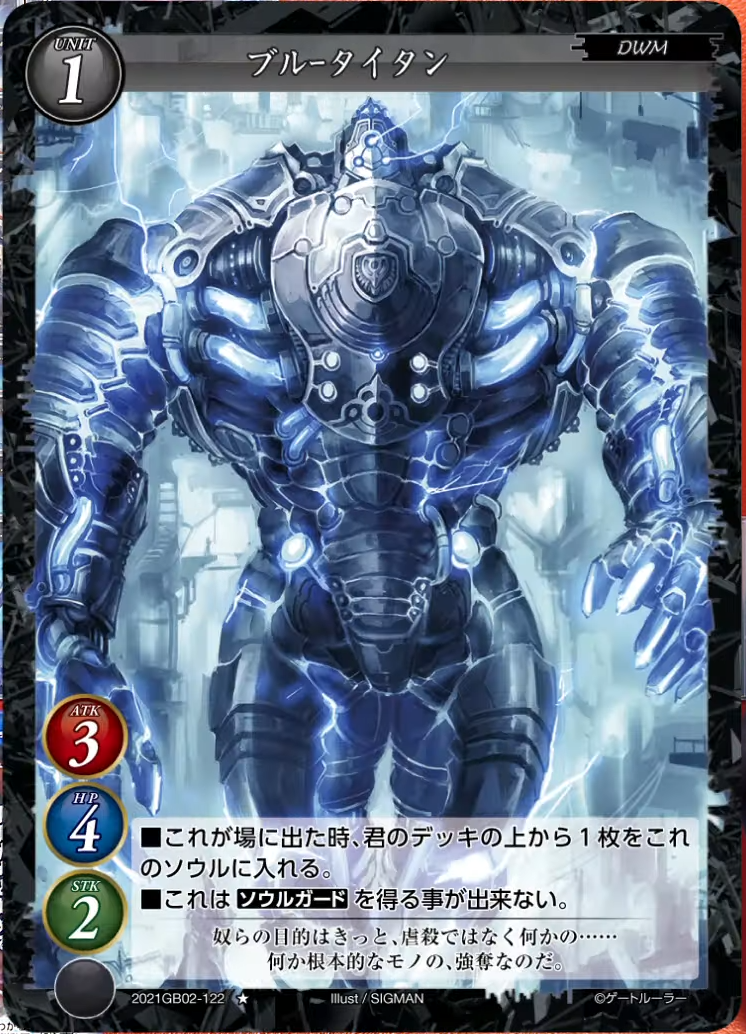 Blue Titan
Card Number: 2021GB02-122 ★
Faction: Exvaders
Card Type: Unit
Level: 1
Attribute(s): DWM
ATK: 3
HP: 4
STK: 2
Effect: ■ When this enters the field, put the top card of your deck into the charges of this.
■ This cannot get [Charge Shield].
Flavor Text: Their purpose is probably something other than slaughter but the robbery of something...fundamental.

And lastly we have Blue Titan! Mentioned earlier in the article, this is an Exvaders-native version of Jake, but only gets 1 charge. Still clearly very useful, but not quite as good as Jake.