Posted on 24th June, 2021 at 1:20pm CST
2 days ago, on June 22nd, the official Japanese website published the ruleset for the long-awaited Single Player version of Gate Ruler! This article translates all of the rules, deck details, and attached lore so that you can enjoy this version of Gate Ruler yourself! 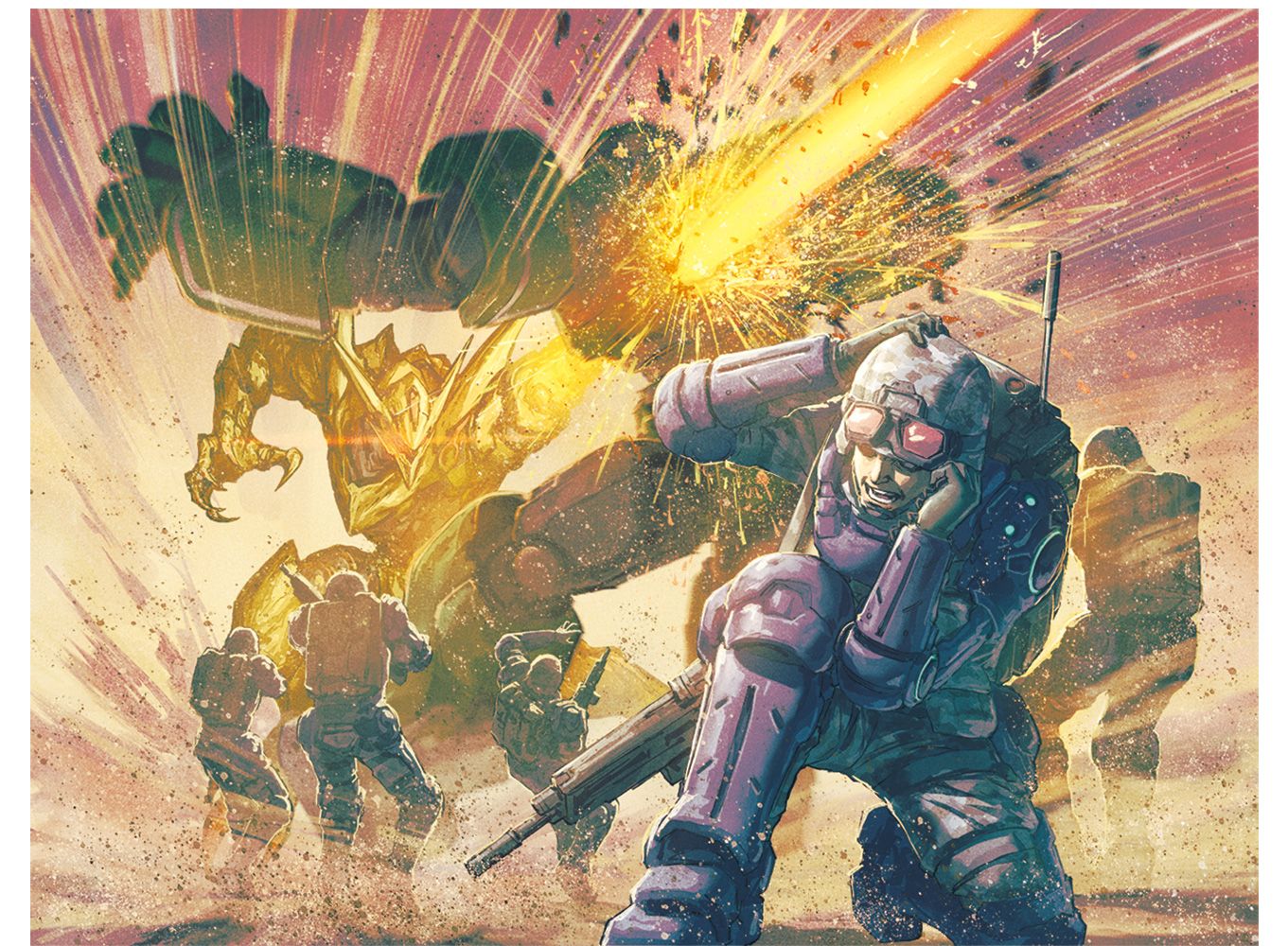 Become a special agent Gate Ruler of the Yomajin Front, and take down the Exvader's dimensional faults!

There are 6 levels of Dimensional Faults (Exvader decks) in total! Please try them all!

I'm sure you're all sick of lectures. You can rest easy, those days are now behind you. From here on, you'll be treated like proper soldiers. We have an opponent for you who can spar with to your heart's content, using that Gate Ruler power of yours.

Bear in mind that while it is a simulation, it won't be like that risk-free card game you all enjoy. The soldiers of Ancient Rome used real weapons in their daily training. Likewise, our simulation is as close as possible to the real deal. Its made to ensure you won't die, but you can absolutely still be injured.

There are two levels of simulation. To start, let's have you all get the hang of this with level 1." 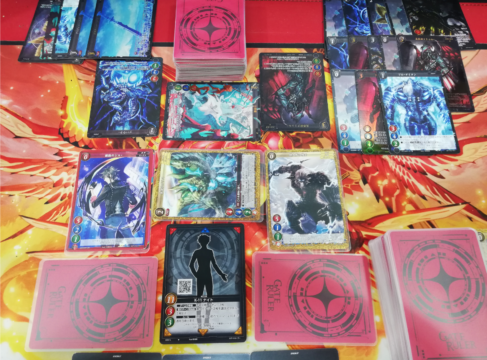 Today we're introducing a new ruleset for Gate Ruler "Invasion of Hell, Dimensional Fault Battle"! Its a ruleset designed to allow players to enjoy Gate Ruler even when they have no one to play with.

The player becomes a Gate Ruler candidate and begins training to protect the people from the great enemy "Exvaders" that suddenly appeared in the world. The Exvaders send out enemies one after another through the space-time hole called a "Dimensional Fault". The battle can never end unless the Dimensional Fault is destroyed.

Game Preparation:
・Gate Ruler deck that meets the construction requirements for your Ruler
・The Ruler and Resource cards that you will use
・Exvader's deck (NOTE: You don't need to have a Ruler on the Exvader's side. Place the Exvader's deck in the Ruler zone and play as if the deck is the Ruler.)

Rules of Play:
・The Exvader side will always take the 1st turn
・All descriptions of "left" and "right" for the Exvader's side of the field in these rules are from the player's perspective.

Player's side (Front side of above photo):
・Rules are the same as normal, you can play cards according to the method your Ruler allows
・As a special rule, you will only have 2 set zones

Exvader's side (Back side of above photo):
・Place the deck directly in front of you, as shown in the photo
・The deck itself acts as the Ruler, but you don't need to exhaust it to attack
・The attack and defense zones are placed in the same way as the player
・The Exvader's graveyard is next to the deck, and the damage zone uses the space on the right side
・The Exvader's side has no set zones or field zones

Gate Ruler's Single Player rules are designed so that the Exvader's side does not need to make any choices. The locations of units, the order of attacks, and the targets of attacks/effects are all decided by a pre-set pattern.

Exvader's Gameplay:
1. Drive
・At the beginning of the turn, Drive 1 (play 1 card from the top of the deck) twice
Unlike the 2 drives of the player, it is done once at a time because all the decisions are made automatically and there is no play order or location of the play that needs to be considered. Don't drive 2 at the same time, drive the 2nd card after competing the 1st drive.

It may seem complicated, but once you play it, it will come intuitively.

3. Event Usage Procedure
・Events driven by the Exvader's side are not set and are always immediately played from the drive zone. After the event is played or negated, it goes to the graveyard.

4. Targeting for Card Effects
・When a card played from the drive zone or a CNT effect from damage would require targeting a card on the player's field, use a priority system of left attack zone -> defense zone -> right attack zone.

5. Movement Phase
・The Exvader's side does not move their units during the main phase

8. Others
・As the Single Player Rules are just a casual sub-game of Gate Ruler, and not for tournament play, it is not legible for ruling inquiries, and we encourage player's to choose how to handle any circumstances that are not covered here at their own discretion

Now let's introduce the decks you'll be going up against!
"Invasion of Hell, Dimensional Fault Battle" has 5 decks (plus 1 bonus) for you to go up against, all of which you can download and print off for free, so all you need to own is your own deck! 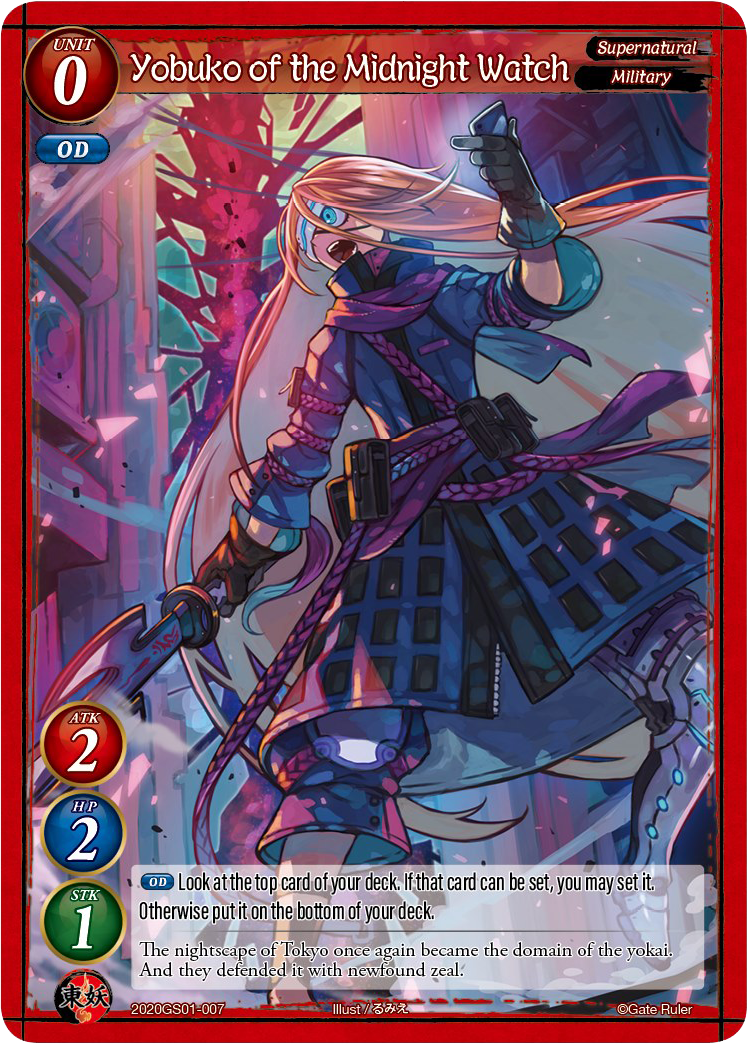 It will mainly spit out small units, level 0 and 1, and can be dealt with by a single platoon of our Yomajin Front. Its not a threat on the scale of what we train you Gate Rulers for.

There won't be any backlash (CNT effect) from damaging this fault, so the means of attack is very simple. Play a strong defensive unit to the left, and steadily attack it with your Ruler and Units.

It might seem daunting at first, but you guys have learned enough in your lectures. This shouldn't be a problem." 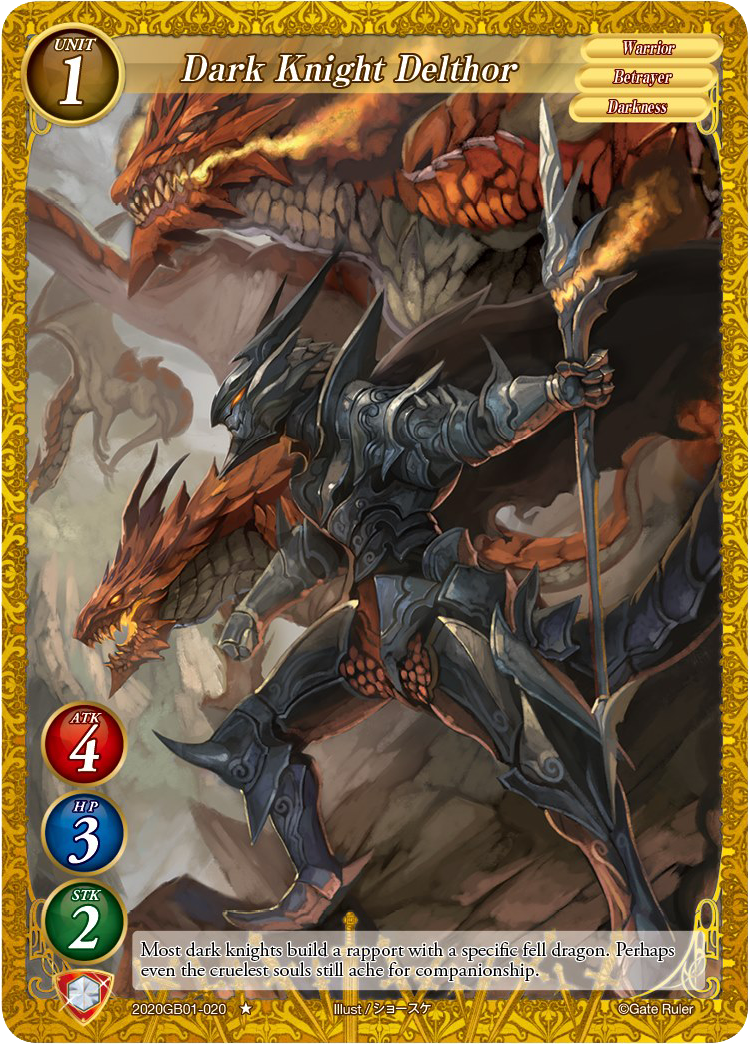 ★ Dimensional Fault Level 2 "Army of Jet-Black Knights"
April 29th, 2034
Instructor Avaci: "It seems the 1st simulation didn't quite break you in, but this here is the original simulation. This one is modeled after the dimensional fault that appeared in August 2033. Its a special and terrifying dimensional fault with special tricks up its sleeve.

According to the Institute of Warfare, this fault was directly connected to the demon world of our ally, Volnar. Its possible to deal with faults of this level with the Yomajin Front army, but it will result in significant collateral damage. So for these we tend to send in Gate Rulers. This is what you'll be expected to deal with."

effect of "Terminus, Dragon of Annihilation" 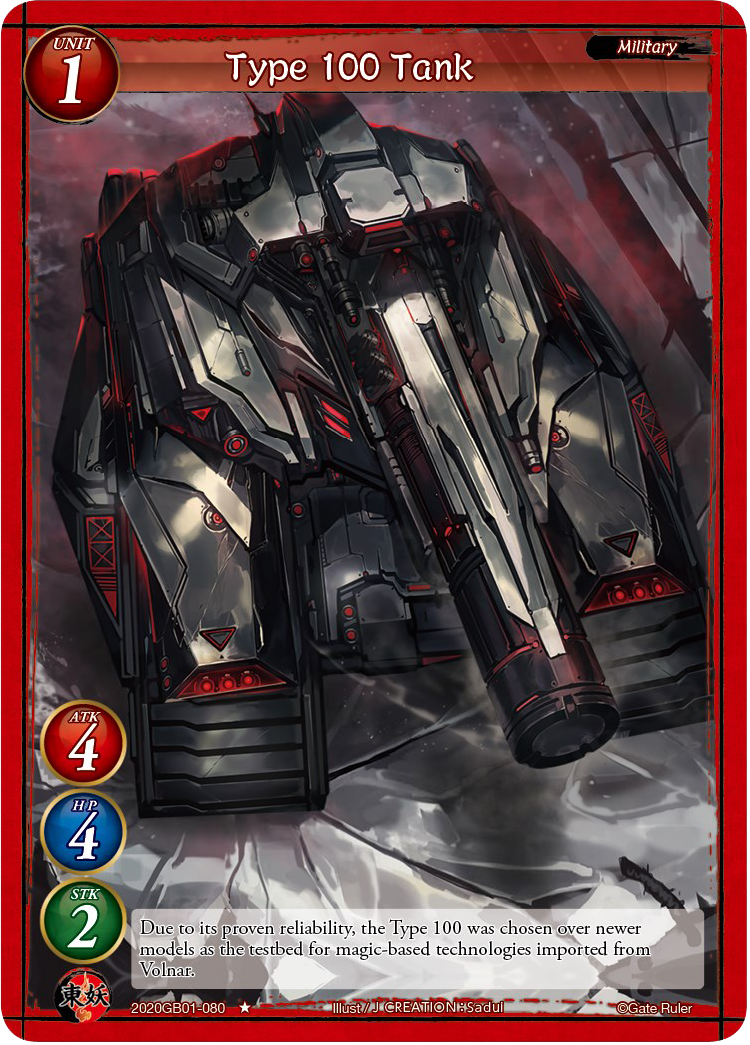 Right now, we have a medium-sized dimensional fault that's appeared in Chofu City. I want you to accompany us. As you know, the simulation wasn't able to reproduce the "Counter" that manifests from positive energy, so be cautious of that in the real deal. Normally we deal with this size of dimensional fault without a Gate Ruler, but as its your 1st real battle, it seems right to take you. It'll ease you into real combat." 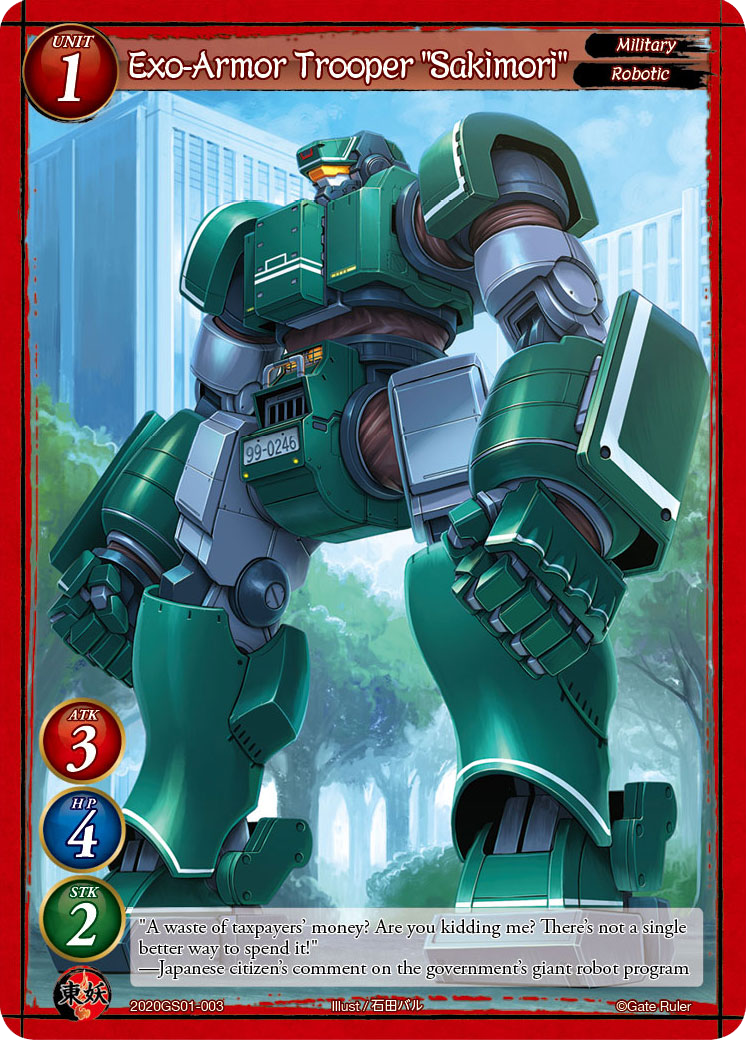 ★ Dimensional Fault Level 4 "Hot Zone"
August 18th, 2034
Exo-Armor Trooper "Sakimori" Pilot, Lieutenant Furaguchi: "You are...ah, yes, the Gate Ruler who was top of their class in deck construction. The one who has earned 12 victories in the 3 months since joining the real battlefield.

I used a connection with headquarters to ask for you. I want you to come with us on this mission. The center of their assault this time...I feel that the "hit" this time is this fault here. When 5 or more faults open simultaneously, there's always a central fault sending out their main force, but this time we're dealing with at least 14 simultaneous faults. You should also be aware that we're dealing with a massive enemy force. If my guess is right, welcome to hell. My apologies is we die together here.

.......Hey, what's the deal with that evil grin? I thought you'd be complaining, but instead you're happy? Haha! I think we're going to get along well. How are you with spicy foods? In that case, if we survive, I'll treat you to an excellent hot pot place." 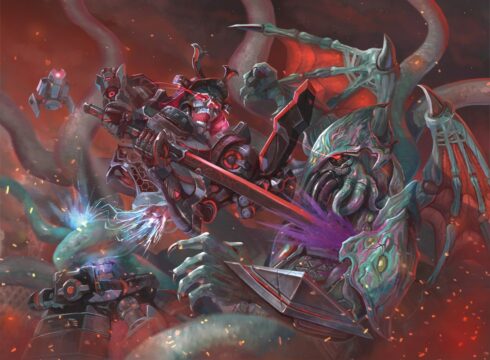 (Art from the 3rd booster pack card "Foreign Yokai", illustrated by 井口佑)
★ Dimensional Fault Level 5 "Onslaught of the Eldritch Gods"
April 1st 2035 12:46
(You are being briefed on the situation while being transported at high speed by the underground hyperloop)

Captain Yamada: "It's encouraging that you came. You only joined the army a year ago, but you've already become an ace everyone recognizes. As you know, the Shinjuku Ward has already become a nightmare. Headquarters has officially designated this as the "Battle of the Third Breach", and we're sending in everything we have. That's why we were called from off-duty.

...Oh. I just returned from Volnar, so I'm having trouble saying 'four' and 'five'.

Anyways, to explain the situation. At 12:00, six large creatures, which are being referred to as "Eldritch Gods", suddenly appeared around Shinjuku Station. Immediately after, a number of both large and small dimensional faults began to appear. There's currently 21, but more are still appearing.

We, who are arriving at the scene late, are being put together as an emergency unit and will be reinforcing the battle at Point S-2. Immediately after we arrive, the operation will begin. At Point S-2, it seems that 3 Gate Rulers who went to the battlefield earlier have been knocked out.

.....Yes, 3 whole Gate Rulers! Currently, we don't have an active Gate Ruler on site. By sending in you, one of our most valuable Gate Rulers, we'll need to take a foolish tactical move of constantly sending in more forces to avoid losing you, since you're the last Gate Ruler we have available to deploy.

Headquarters has decided that S-2 is where the "hit" fault with the main enemy force in this battle. 8 Exo-Armor Trooper "Sakimori" and 10 Type 100 Tank that were sent in earlier for defense have been wiped out. Our ace-in-the-hole, Exosuit Titan Gashadokuro, has put up a good fight, but I hear its already half-destroyed. HQ is preparing to deploy an untested weapon that's fresh off the production line..."Dai-Jinki, the Three Regalions Combined"

However, when it comes down to it, only you can destroy the fault at Point S-2. If you lose, this battle will never end.

I'll be supporting you with the latest equipment, "Tsukikage". Oh, its an unannounced suit of Exo-Armor Trooper. Actually, I guess it can't be helped, but a lot of my action in Volnar is a military secret. At worst, I thought of it as a military trial, but this disaster is guaranteed to put this out in the open. HQ doesn't have any time to grant me permission too.

...These "Eldritch gods" seem to be just like those characters from that famous cosmic horror myth. Honestly, it seems like an awful joke. But since we were cursed to live in a world line like this, we'll just have to do our best, even if its a nightmare. I remember the times when this world was peaceful sometimes. I wish we could go back to the uneventful world line. But there's other possible world lines, like one where nuclear war broke out, or one where a virus has become widespread and no one can go outside, so I guess this isn't the worst case situation.

At least our problem is an enemy we can fight. Our colleagues are able to be united in the pain and joy while they do the necessary work. We both know its too early to despair. All the proof we need of that is this miraculous power of a Gate Ruler like you.

That said, I'm still envious of how lightly you can travel, since a Gate Ruler only needs a deck of cards to fight. On that subject though, the card I picked up yesterday glowed strangely, so maybe I could be a Gate Ruler myself? In Volnar, I had a rough time since I have no magical talent.

...No, thankfully, I don't have the time to get a lecture on how the Gate Ruler power works. It looks like we're about to arrive. But, if we survive, by all means, teach me all about it." 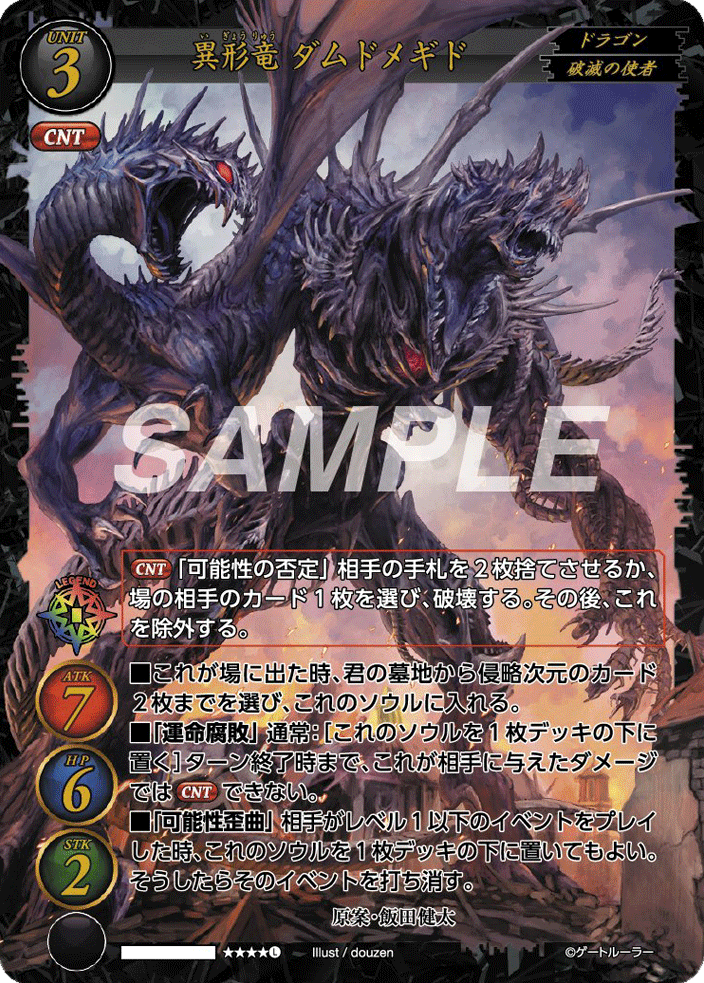 You have a nightmare. No, actually, it may be the reality of the near future.

You don't need to overcome this fight right now.

But one day, we will have to confront this hell.

And that's all! Level 5 is the final level for regular play, and Level 6 is a difficulty level that can only be beaten with a miracle!