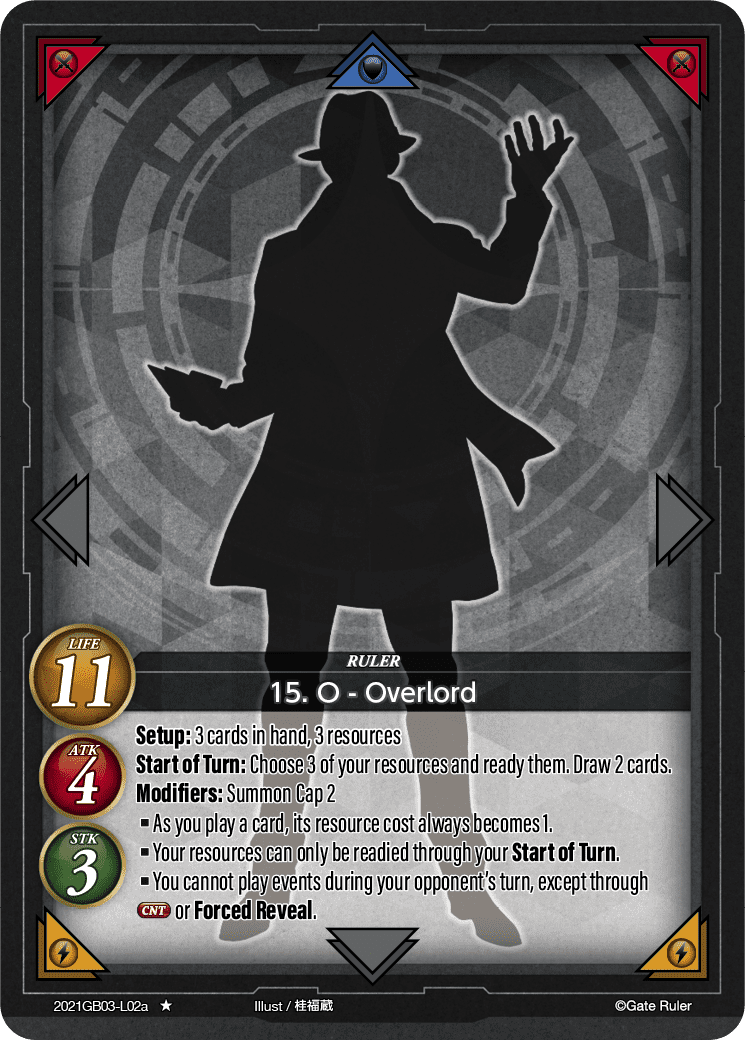 Here we are on another Friday, with another news stream and today, as announced last week, we have the reveal of Set 3's 1st new Ruler, 15. O - Overlord!

A new Hand & Resources based ruler, like 11. K - Knight, 23. W - Wizard, and 12. L - Legion before it. However, compared to those, Overlord changes works significantly differently; it starts with an additional card in its starting hand compared to the other Hand rulers, and readies all 3 of its resources every turn. But most importantly is its special rule, that causes every card you play to cost only 1, whether that's an increase or a decrease!

In exchange for this extremely powerful rule, Overlord comes with 3 big drawbacks: it cannot ready resources outside of the start of your turn, it comes with a level limit, and loses the ability to play events on your opponent's turn.

Of course, losing the ability to play events on your opponent's turn doesn't leave you completely defenseless. Besides the

cards you can load your deck with, you can still use cards and abilities such as Alice, Wonderland Avenger, Vilma, ATLAS Air Force Major, and Draconoid Dreadnaught "Naru-ikazuchi". In fact, the Red/Blue color combination's biggest weakness, a lack of level 0 defensive options, is one inherent to Overlord's rules.

The level limit is also important to note. It prevents you from just loading up on a ton of level 2s and 3s to maximize Overlord's value, but it also forces you to deal with the downside of Overlord's cost modification; cards that would normally be free now cost you a resource. TATARI-JYAAAAH! even gets an additional drawback compared to its usage in Drive decks, where if you activated its Forced Reveal, it'll cost you 1 of your resources.

As one last note, due to its cost modification rules, cards that allow you to drive via card effect, such as Darumageddon and Thousand Year Sakura are worth consideration. Just keep in mind that a unit played from drive is still a normal summon, and is thus still limited by your Summon Cap.

Next we have another article teasing Set 3 units. Just like last week, this deals with 2 different units. 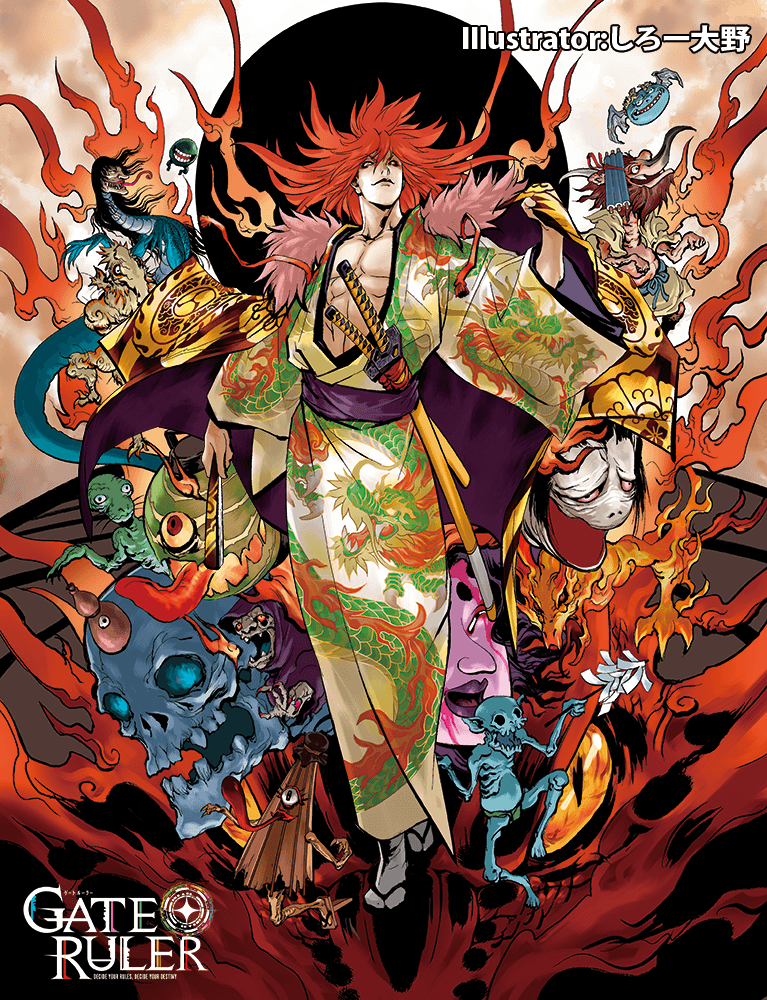 "A demon is both a person and a vine. Its an unsettling thing." Shinno Akugorou, a great yokai who leads those who are bad at working with others, caused a great conflict in the early days of the Yomajin Front. The Yokai world was split into two, and the yokai war, which should have been invisible to humans, instead damaged the human world.

Shinno Akugorou became a ringleader in the conflict, and as both heaven and earth found his actions disagreeable, his long-time rival "Yamamoto Gorozaemon" was sent to deal with him. Shinno is said to have burst into laughter that held enough force to disturb the stagnant air across all of Japan. "I lost, I lost! Wahaha! Alright, I'll apologize personally."

By his nature, Shinno, who had a fondness for competition and always sought to reward the winner, vowed to take responsibility for the conflict and help the Yomajin Front.

This card is designed as a deck finisher for the "Supernatural" attribute. Despite being level 3, it can be played via "Hundred Yokai March". It will also synergize well with an event card that supports Supernatural, and is an incredible control tool.

In this set it will also be possible to make a new kind of Supernatural deck that does not revolve around Hundred Yokai March, and this will be a powerful trump card in those decks as well. 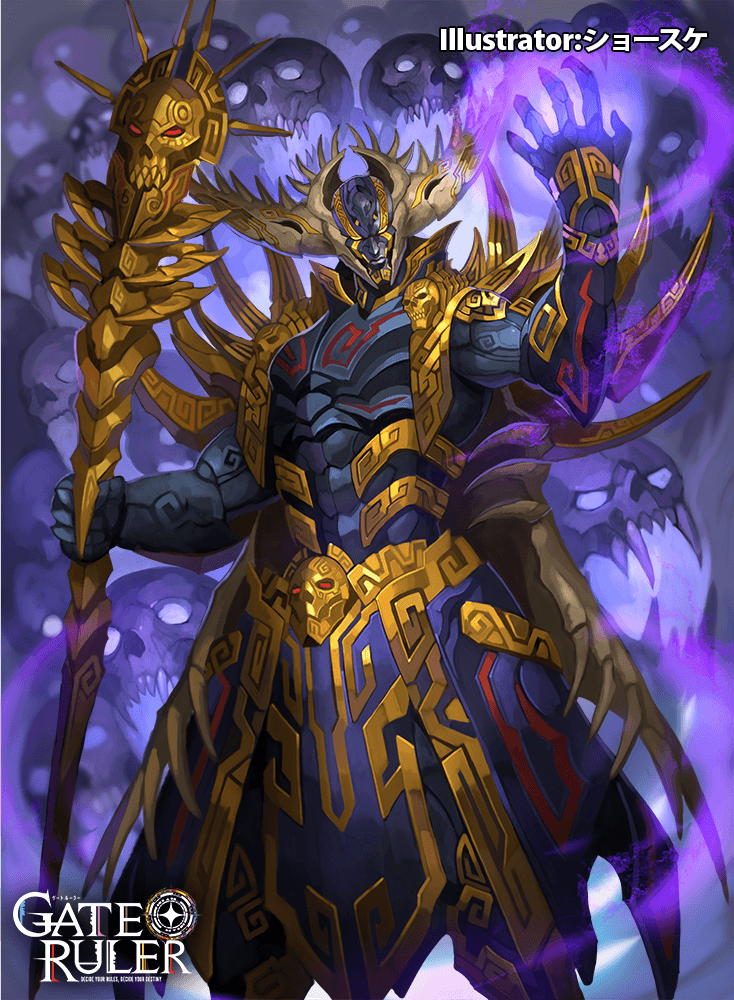 Like the Fell Dragon Priest Zor, Vamel is a mage-type dark knight who is among Vastorus Rex's most active subordinates. Since he has a selfish heart and has no loyalty, he's constantly clashing with Zor, who is blindly loyal to the Fell Dragon.

However, his scheming ability is unmatched, so he's one of the most reliable allies you can have...as long as he remains on your team.

Its a very powerful card with a defensive effect you can activate by discarding it from your hand during your opponent's turn. Although it possesses the Darkness attribute, and is part of the Dark Knight archetype, its actually an incredible general-use card. You could even call it a long-awaited card for Hand-type Rulers.