Posted on 7th October, 2021 at 6:11pm CST
Card images in this article can be clicked for a pop-up with expanded details, including its translated effect for cards not yet released in English. 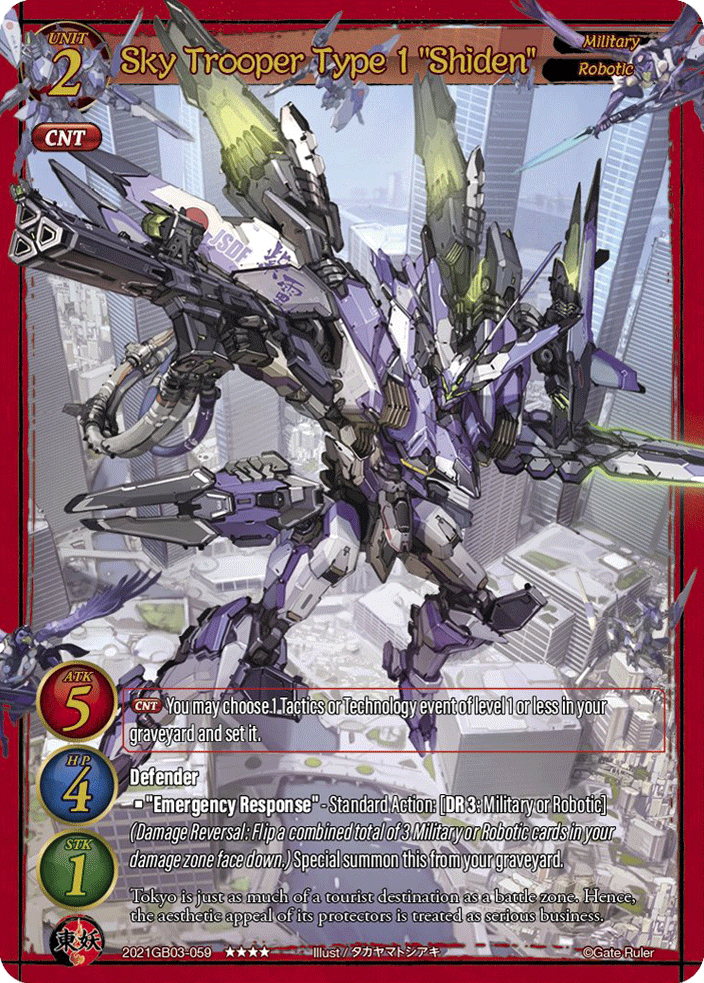 Based on the reveal patterns for English, the next card will be Rikori of the Cluster Amaryllis, but the ★★★★ following that is unknown. That said, there's a pretty good chance its Spring Elegance. After that will be the 1st ★★★ slot for Yomajin, which is also unknown.

Sky Trooper Type 1 "Shiden" has a very powerful revival ability similar to Captain Zombie's, where its actual ability and statline more closely resemble Captain Liberty. On top of that, it has a

ability that will prevent it from ever getting trapped in the damage zone, and is potentially powerful in its own right. Unfortunately, at the moment, the Tactics and Technology events Shiden is able to get back aren't particularly impressive at the moment, with probably the most universally useful one being Desperate Resistance, though there are other situationally useful cards like Blazing Dai-jin Sword!, The Battle for Cyprus Base, and Space Gacha! are also available. Of course, some new incredible event that fits Shiden's parameters could be released at any time too, so these are now attributes to keep in the back of your mind when evaluating cards.

Previously these sorts of revival abilities have only been seen in ATLAS, so seeing one in Yomajin Front gives a whole new kind of color combinations access to it. Robotics has a decent number of cards like Galactic Swordmaster Granmezzer's Enhance or Emergency Fusion NOW!!! which need Robotics fodder that this can easily provide.

of course, and discarding it for Trickster immediately puts it in the graveyard for self-revival. And then, if there's any event it can grab for you that is immediately useful, the fact that Shiden sets the event instead of adding the event means its available to use right away.

As one last point, since this and Captain Zombie have crossover in their Damage Reversal requirements, both needing Military, there could be a new type of Red-Blue Military build pop up that uses both of these cards in tandem, and decides which to revive based on the situation.
Edited by HunterSerge on 7th October, 2021 at 6:11pm CST