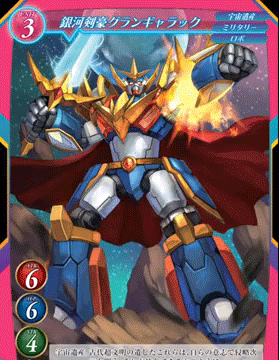 Grand Galac has been mentioned before to be one of the hardest hitting cards in the 1st environment, and now we can see for ourselves what that means. Its very reminiscent of the Size 3s from Buddyfight's first starter decks, Gigant Sword Dragon and Armorknight Black Drake, with high Attack and HP and a Strike of 4. It'll have to see how Level restricts your field by comparison to Size, as that was a big part of why those cards were bad in Buddyfight. The implied MtG combat mechanics would also give Grand Galac a lot more defensive utility than Gigant Sword and Black Drake had. 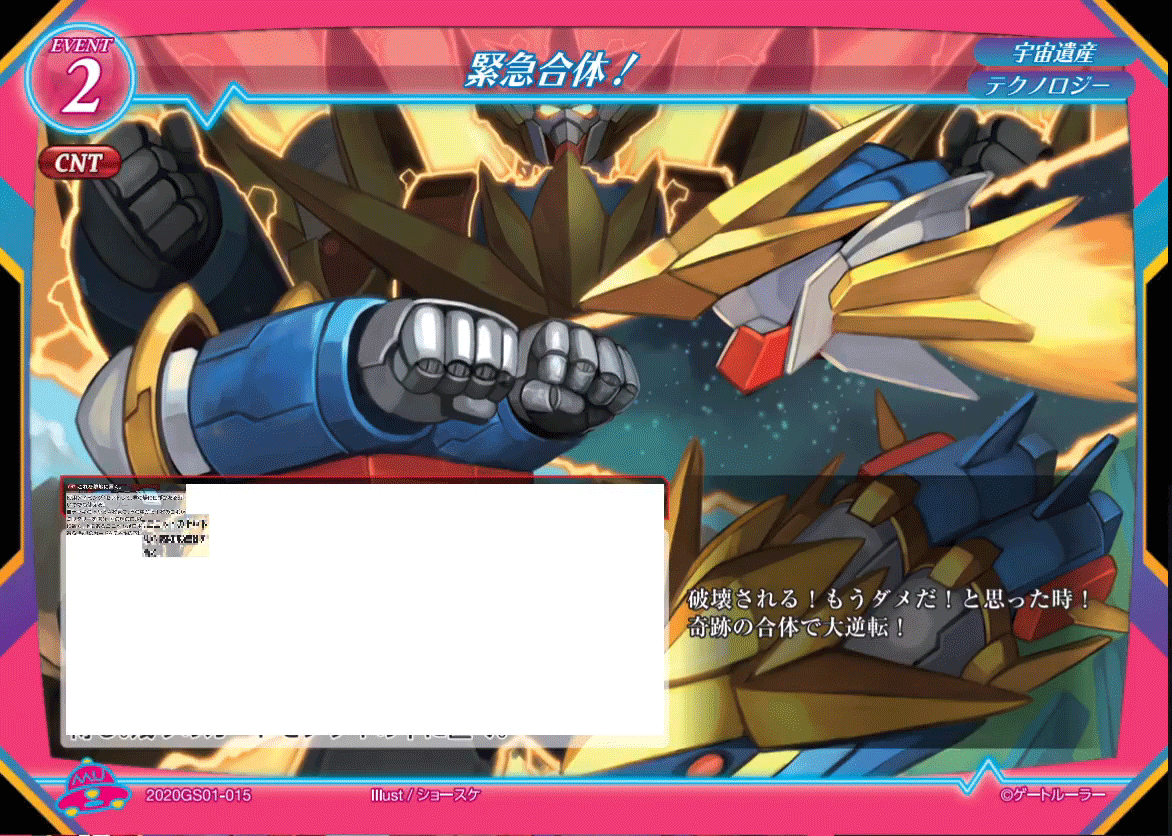 While we can't see anything about its effect (beyond knowing that it does have a [CNT] effect), between this card's art and previous descriptions of the Starter Deck, its clear that Grand Galac is the "combining robot" strategy that's been described previously. Perhaps summoning Grand Galac via this Event will give it some kind of bonus? 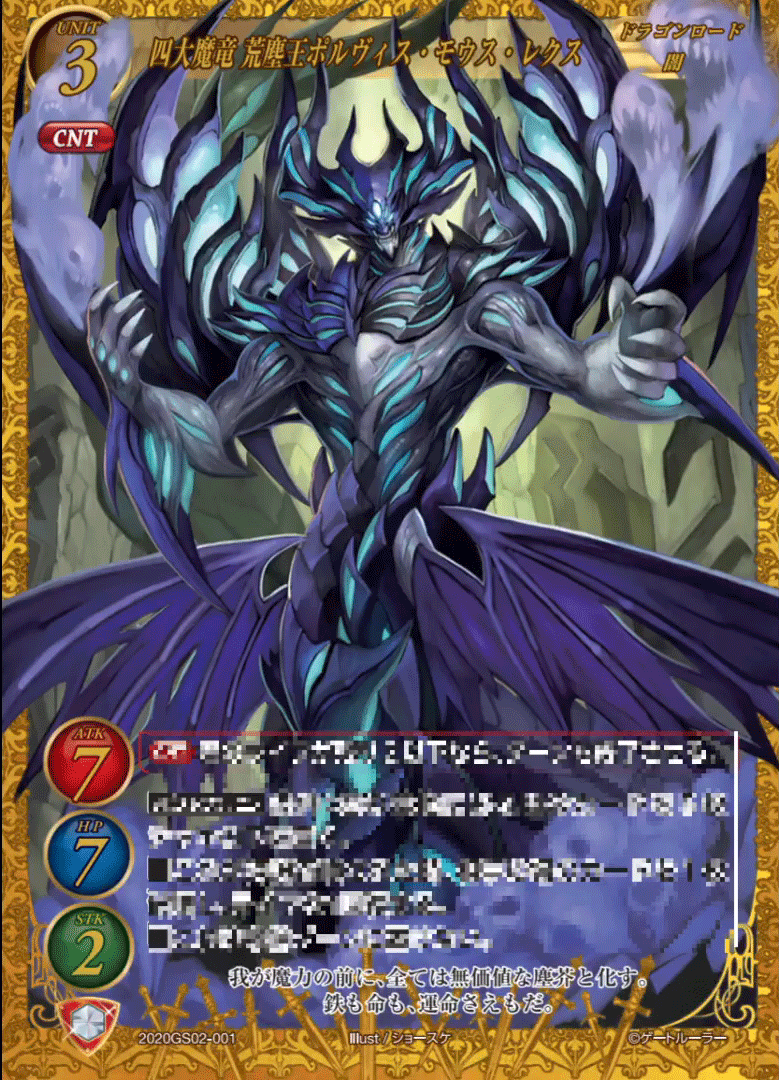 The boss unit of Starter Deck 02! Its stats are the highest we've seen so far, with a very large 7/7 split, and we can see 3 whole effects on it, though they are unreadable. Assumedly the first of that is just the conditions for its Abyss Summon. On top of that, it has a [CNT] effect, which while blurred out is recognizable enough to be identified as the same effect on Time-eating Genie, as Ikeda confirmed in this tweet. Previous descriptions tell us that [CNT] effects are similar to Duel Master's Shield Triggers, and given the presence of the damage zone, likely activating similarly to Vanguard's damage triggers. This sort of defensive [CNT] seems very good emergency survival, so seeing it featured on a boss unit seems very good. 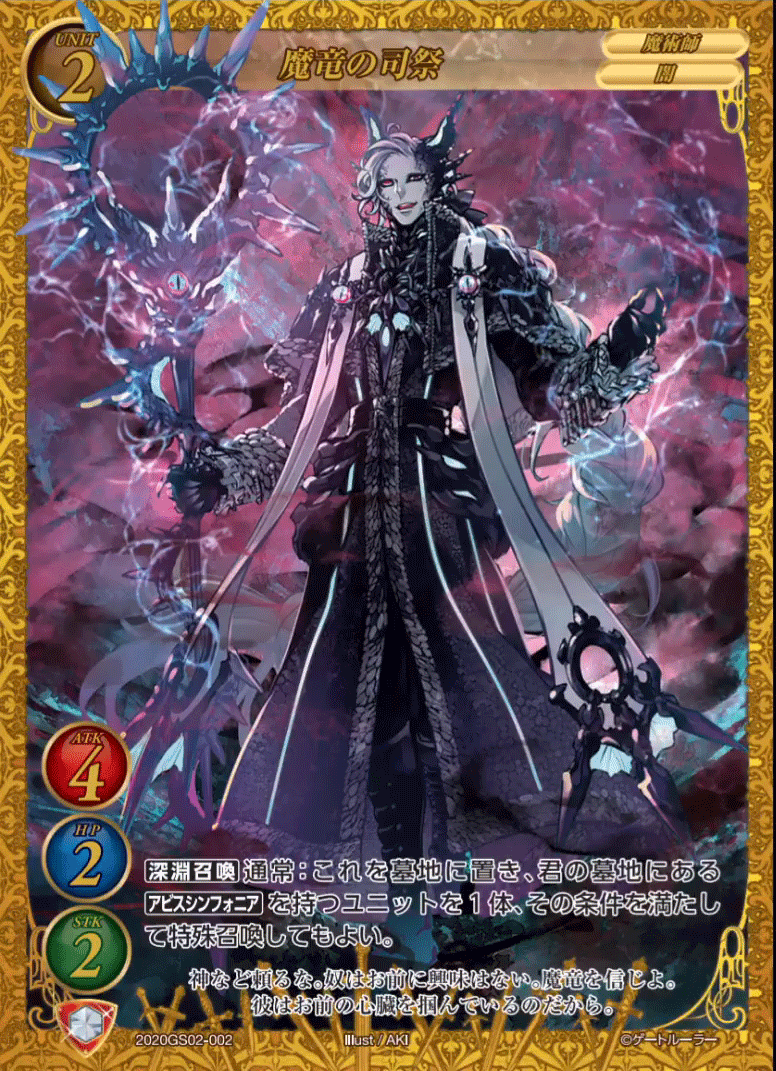 Our first revealed method of performing Abyss Summon! Its made clear from this that the conditions are featured on the target unit, rather than any sort of standard requirement for all cards with [Abyss Symphonia]. Between this card and Vastorus Rex itself it becomes clear that "Darkness" is the attribute that Abyss Summon/Abyss Symphonia cares about. Also interesting to see that it must Special Summon from the Graveyard, a bit easier to fulfill and naturally integrated with its setup than needing to have it in hand.

And last up, a card that was revealed over on Twitter. 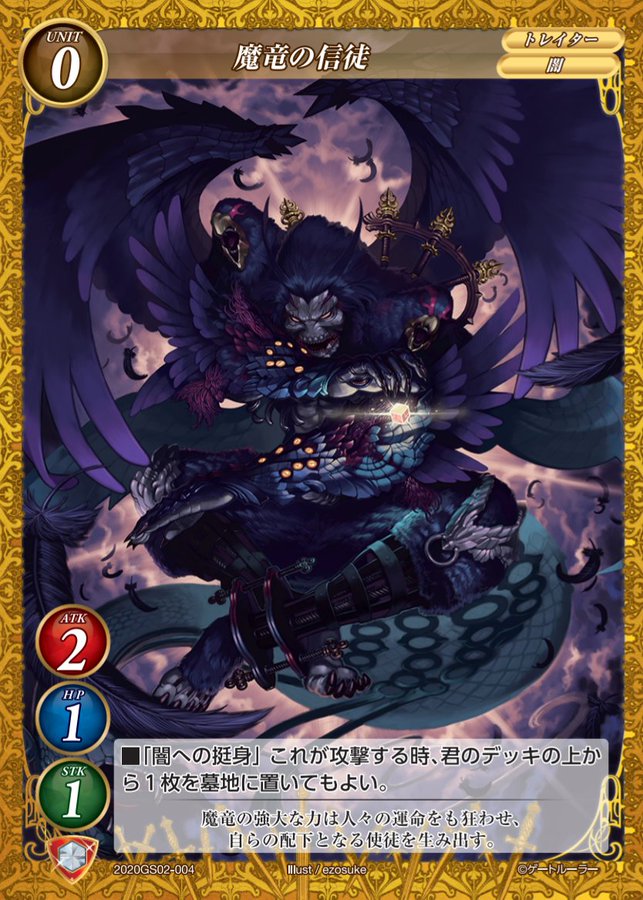 Follower of Demonic Dragon (2020GS01-004)
Faction: Volnar
Card Type: Unit
Level: 0
Attribute(s): Traitor, Darkness
Attack: 2
HP: 1
Strike: 1
Effect: "Giving into Darkness" When it attacks, you may send the top card of your deck to your Graveyard.
Flavor Text: The powerful flame of the demonic dragon derails the people's fate, and creates an apostle.
---
"Follower of Demonic Dragon" is a card included in Starter Deck 02 "Demon Dragon Summoning".
The Special Summon "Abyss Symphonia", which is the deck's theme, is activated by increasing the number of "Darkness" attribute cards in your Graveyard. This card is an excellent support who helps set up your conditions.