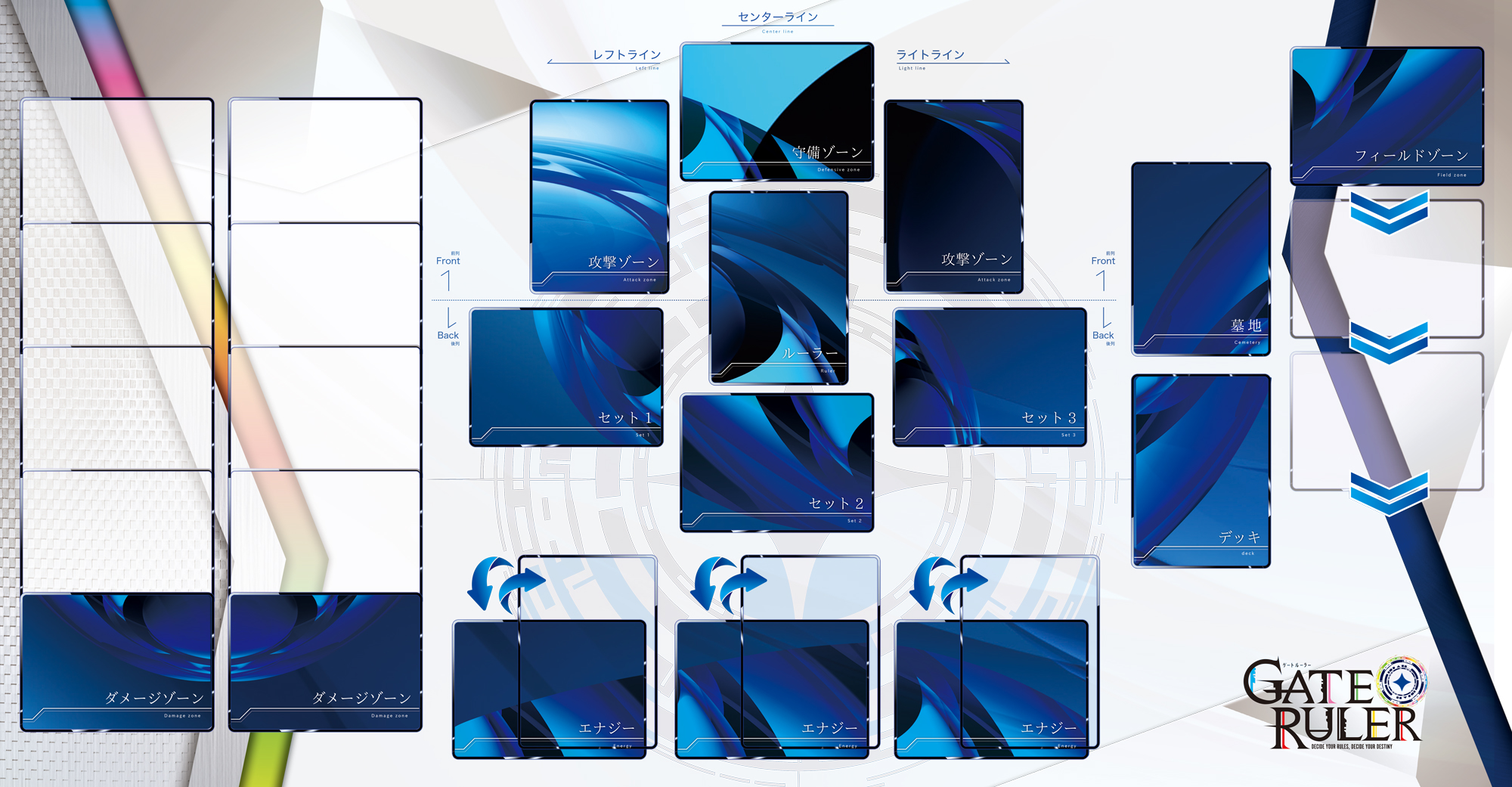 Gate Ruler playmat.
We will use this in test play and derive changes in design and terms from there.
We are pursuing ease of use.

Explaining the two rows of damage zones. It is not a detail that's present because of a complicated system, its just two rows for easy counting.

At first glance, it looks like there are many different zones, but it is not particularly complicated compared to other TCGs. Please rest assured.

I think the play sheet is one of a game's faces. Some people like Weiss Schwarz and Luck & Logic, which have a lot of different zones on their play sheet, because it looks advanced, and some people like simple play sheets like Duel Masters.

For Gate Ruler, as usual, it depends on the Ruler. Even the play sheet can change. However, at least for the 1st and 2nd sets you'll be able to play with just this playsheet. Of course, like all other TCGs, once you get used to it, you can play without the playsheet.

Sideways cards are hard to use if they are in your hand, but as you can see on the playmat, Gate Ruler's Event cards are sideways. The reason its this way is because they are set and played from the field. In other words, its a trap card. Even for beginners, you can intuitively understand that "because it is a sideways card, you set it on the field".

When you actually touch it, you can understand very well because sideways cards are easy to turn over on the field, aren't they?

All of this is the result of making Gate Ruler with the aim of "touching and having fun with TCG".

This is a play sheet made for spacious play, but if you compress it, you can make a play sheet for Gate Ruler on one sheet of A3 paper.

I want to make a simplified version so that anyone can download it from the official website.

I have received questions from everyone, so let's summarize.

Q: It looks like it takes a lot of space
A: Its just widened to make it easier to learn, so its not really a problem.

Q: Is the Field zone okay where it is?
A: It was annoying when I put it on the inside. Maybe you can find a place where it is easy for you to play?

Also, this is important, so let's make it clear.

"In Gate Ruler, everything can change depending on the Ruler"

The various zones on this playmat may or may not be used depending on the Ruler. For example, Apprentice does not use the entire Energy zone.

"I will not publish the rules until you can play it"
I think you will understand why I said that. With misunderstandings and misinterpretations on the internet, 80% of people can respond negatively. What I can say for now is that "I think all the anxiety and dissatisfaction will be dispelled when you play it".

Look forward to it.

The official playmat is finally here! We've been working off the incomplete Dominator playmat and the image of the test play until now, but with this we get much more complete information, plus some new questions.

We see our left and right zones, with the Ruler behind it, and our 3 Event zones behind it, plus our Damage Zone over on the left, all as established. As Ikeda stated, the Damage Zone is split into two rows for easy counting, and is not actually two rows, but a single zone.

On to new information! First off, the Center Line is sideways and is labeled a "Defensive Zone". It could just be called that because the unit in the center can protect you, but being sideways likely means the unit in that zone cannot attack. Center zone mechanics combined with MtG combat mechanics and Soulguard seemed very powerful, so this may be the way of balancing out. I have to wonder now if the Center area mechanic from Buddyfight of "the player themselves cannot attack if something is in the center" will still be present, since this is a pretty major drawback.

There's also the possibility that this will be how blocking works, with units simply moving to the Center line when they defend you, with the zone being sideways to indicate that the unit rests to move there. The one concern with this is even less room for swarming strategies to exist than in Buddyfight, but as Ikeda says "anything can change depending on the Ruler" so there's no reason there couldn't be Rulers that give you more zones to place units in to allow for swarming strategies.

Next up, the new Field zone! Considering its sideways, its probably safe to assume these are for some form of Events that stay on the field. Perhaps all Events are initially set, but after a Field Event is flipped over, it then moves to the Field zone. This will allow strategies revolving around these sorts of permanent cards to exist without clogging the small 3 slots for Events. Looking at the arrows plus the "empty" zones underneath, it seems like there will be no limit on the number of Fields you can have.

Lastly, we have Energy. This seems to be some sort of mana mechanic, considering the tap/rest motion being present in even the zone design. Being limited to 3, one might have assumed that this would finally put to rest how Level works, but Ikeda stated that Apprentice does not use all the Energy zones. While certain Rulers losing access to Level 3s, where all the boss units seem to be, certainly seems possible, it seems super unlikely to do so in the first set, when Apprentice would be the only of the "luck based" Rulers. It'd be pretty restrictive to force players who want to play luck based decks to not be able to use the flashy boss units. So for now, how this Energy works and how Level works still seems like a mystery.