Posted on 19th November, 2020 at 2:57pm CST
DISCLAIMER FOR NEW READERS: We know that cards in this article use artwork from Force of Will. Ikeda has purchased the rights to use several pieces of art from Force of Will in Gate Ruler, and Force of Will's publisher, Eye Spy, is said to be involved with the English release.

The name contest for the previously shown kaiju unit has concluded! 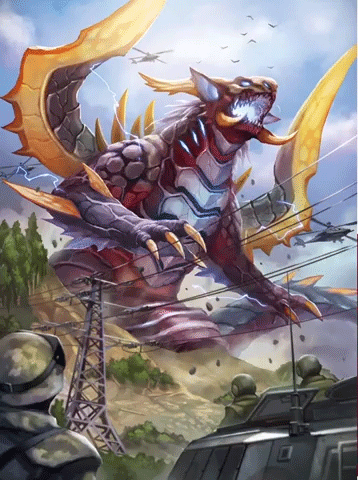 Kaiju naming contest, result announcement! ...but this is the first time I've been worried about it. "Is this really okay?!", which is bad for the winner, Taka, but I was really worried.

The name of the kaiju is decided to be "Tsunoardon"!

Its an impactful and memorable name! Let me explain a little more. This time as well, everyone took it very seriously. Some of the settings were great but the names weren't good, some names were cool but hard to remember, and some had both a cool name and setting but were also hard to remember.

No, that said, there was a name that was perfect, being both easy to remember and cool.

...But those seriously well-made names were all destroyed by the impact of "Tsunoardon"! I don't think I'm the only one. "Oh my god! After all, Tsunoardon stays in my head!" There was a bunch of people at the hearing on discord. All the reasoning was blown away by the ridiculous and irresponsible name of "Tsunoardon"! (I'm not disappointed. I chose this name because its the sort of name I choose with Buddyfight and Gate Ruler!) All of them were defeated by your name! Taka, you win!

The only problem is, "I wonder if this is what the Yomajin Front would call this invading monster?". If this kaiju causes serious human damage, "My father...was killed by Tsunoardon", wouldn't it come off as a funny name, even for those who said it? Maybe. Don't turn human death into a gag, even in the world of fiction. In terms of setting, its not always the case that there were dead people, but it would be inappropriate for the official name from the army.

For the time being, the names of enemies can be "official name", "slang name between soldiers at the scene", and "slang name given by people on social media". Most often the names are given by soldiers and SNS users. For example, "Vamha" makes vibrating sound, like a heart's pounding, or sound similiar to a flopping of a giant umbrella. This creature was named after the sound "Va (mu) ha", as this is a sort of a tradition to give names based on a creature's roar or sound it makes.

Tsunoardon would probably be a popular name given on social media.
"A giant creature of the Exvaders has appeared! ...Its like a kaiju!"
"Like a guy?"
"That's not it! For the time being, doesn't it have horns?!"
"Tsunoardon lolololol"
Or maybe it got caught in a comment like "Thira Kenzan".

So his name is Tsunoardon. If a kaiju appears in the future, it seems customary that Gate Ruler will name it in a unique direction. Doing that can be scary. However, there is no rule that it must be amusing, so feel free in your future applications.

One more thing. The title that precedes "Tsunoardon" got overlooked here. I'm sorry.

Congratulations to Taka! Please tell us the name you'd like put on the card in a direct message.

Next, a new illustration for a Volnar Event, Flying Shield! 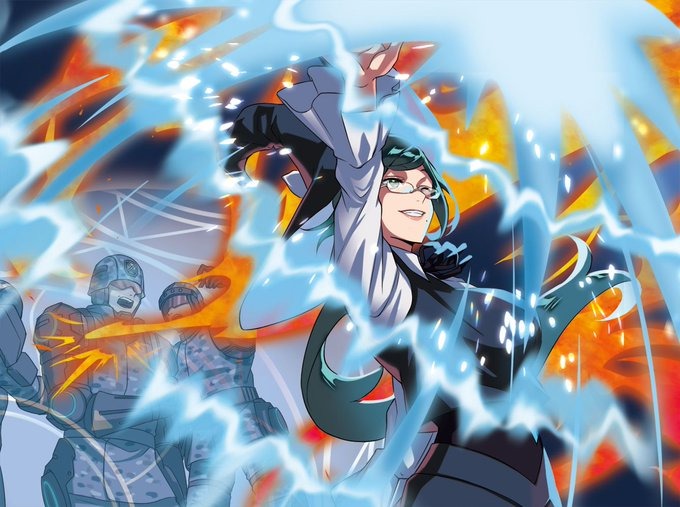 The people behind Shiori are members of "Yomajin Front Volnar Dispatch Unit".

The Yomajin Front was invited to Volnar's Empire for technological development purposes. Shiori is a guide. She is a reincarnated person and has memories of being Japanese in her past life, so she's the best person for the job.

However, Shiori and the dispatch unit are trapped by the demon dragon, Vastorus Rex, and are transported deep into his territory. In a situation where most chemical weapons violate the "world's rules" and will not activate...can they escape the demon dragon's territory?!

For the rest of today's article, we will be going over the details of the various box topper promos for the 1st set! We'll be covering information from Ikeda's tweets as well as this article on the official site. 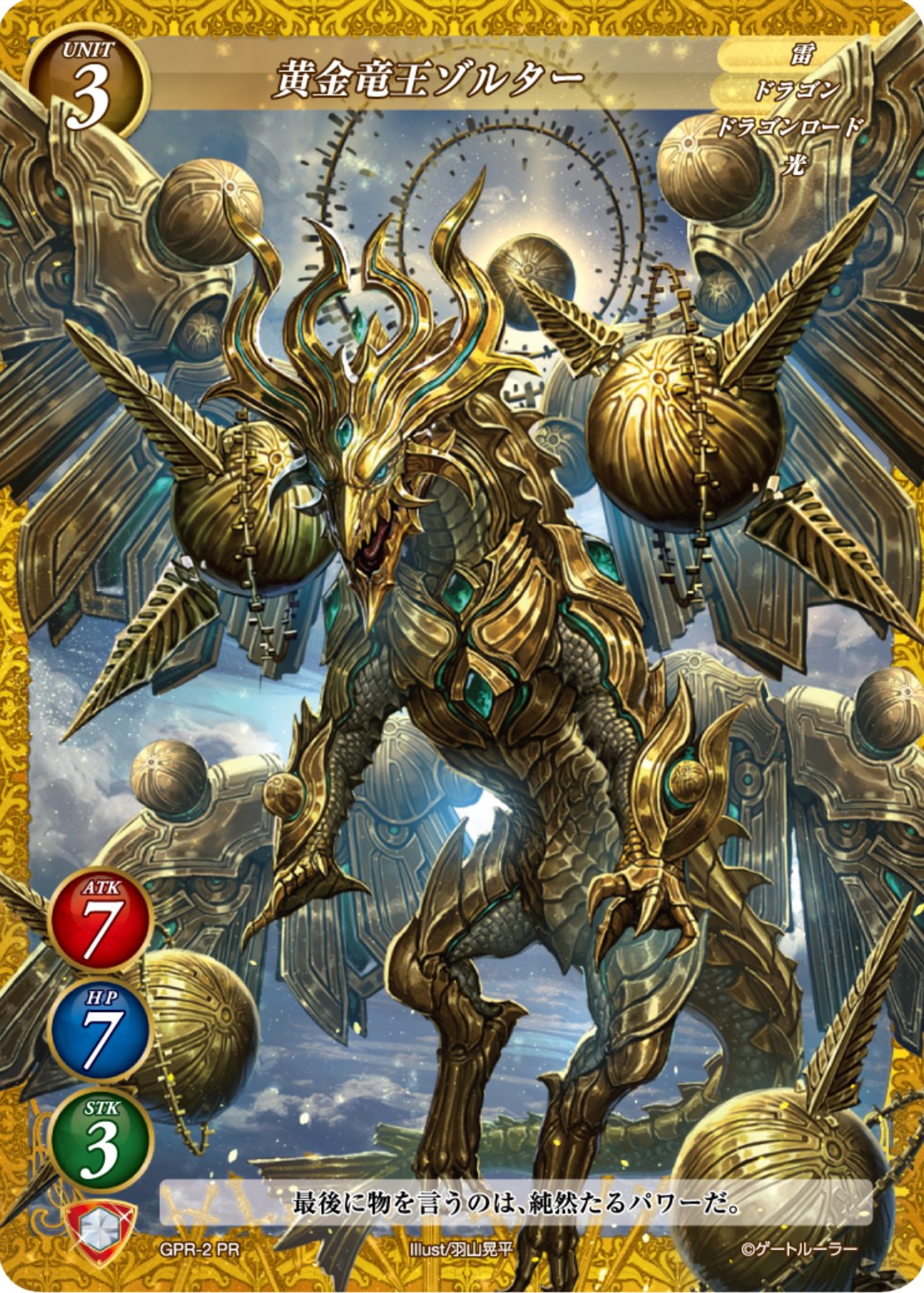 ★Products sold from the full release (on the 26th) onwards will come with a promo pack. (The contained cards are previews of cards that will be printed in the 2nd set)

★Pre-release sales will instead come with a super rare promo card!

★The other box topper promotions are the same for both the pre-release and full release.

By the way, about this promo card, "Gold Dragon King, Zoltar"...

You might think, "even if its super rare, its just a vanilla", but its actually dangerous. Its strength lies in having 7 HP.

...There is no effect damage card that can deal 7 damage by itself in the first set.

There is an opinion of "its too strong!", but in terms of cost ratio, Grand Galac has 1 more point. 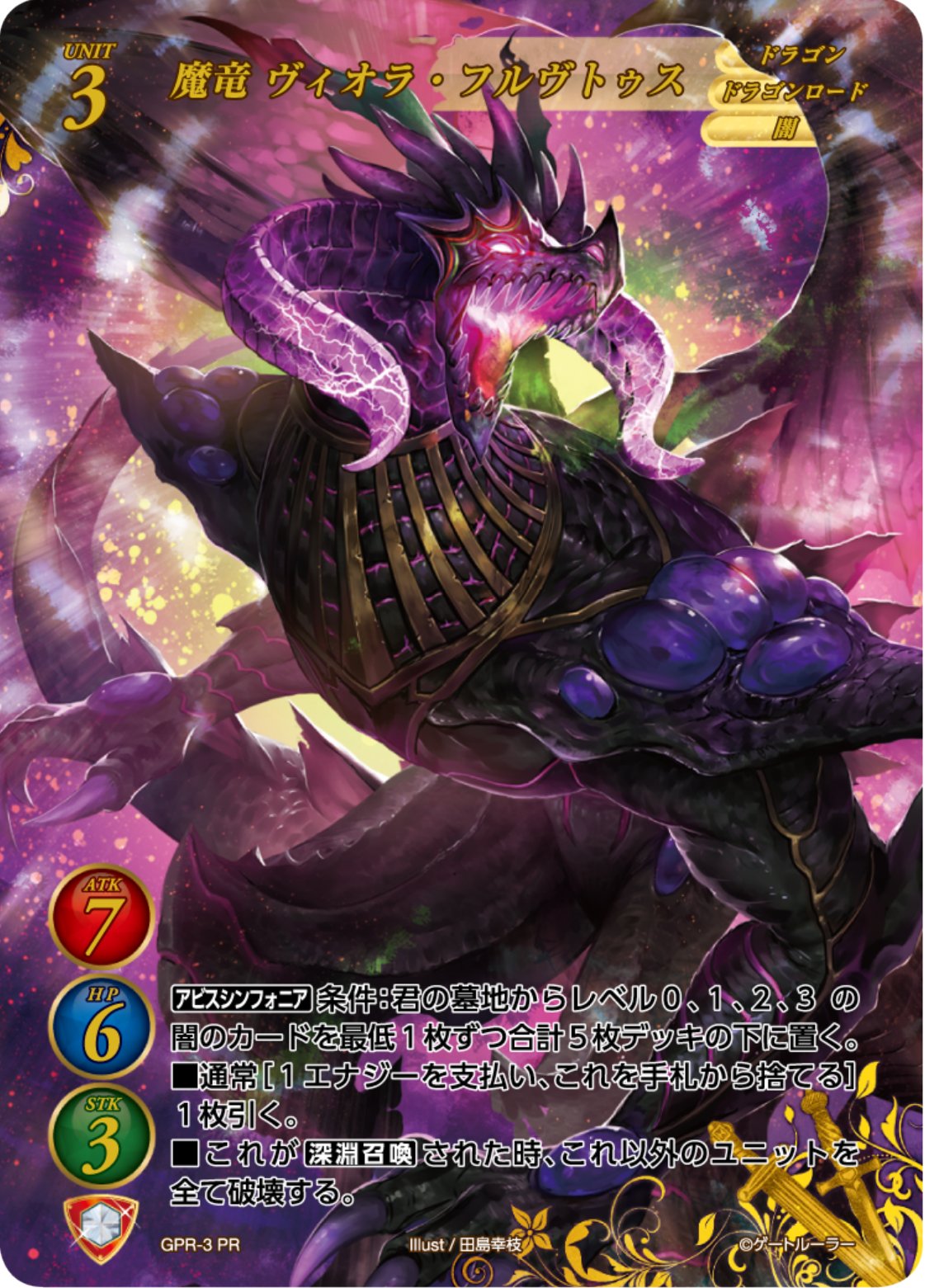 ...By the way, half of the produced high rarity packs have already been taken in the initial order. Its dangerous. 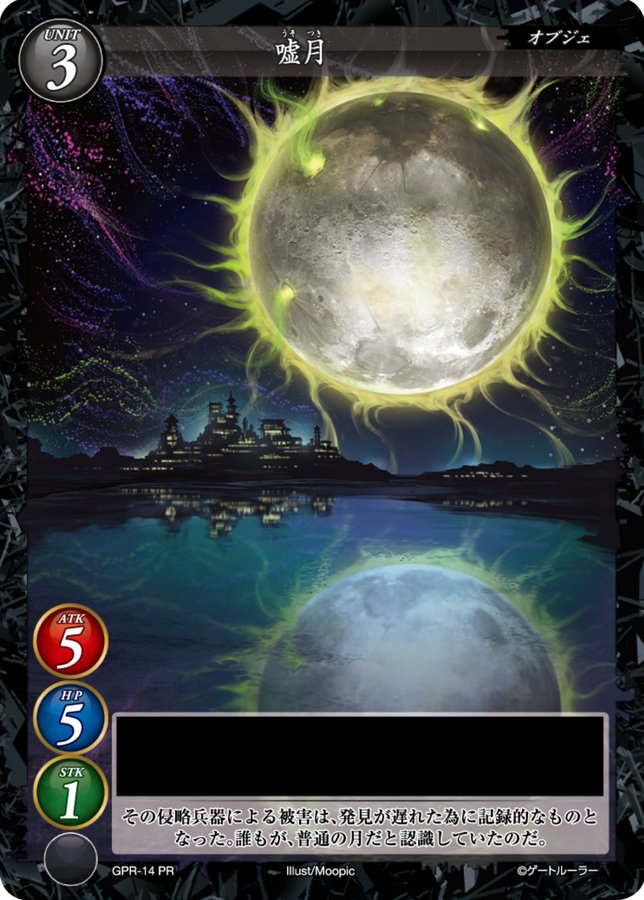 Liar Moon
Card Number: GPR-14
Faction: Exvader
Card Type: Unit
Level: 3
Attribute(s): Object
Attack: 5
HP: 5
Strike: 1
Flavor Text: Among the Exvader weapons, it set a record for the amount of damage done due to the discovery being delayed, because everyone thought it was a normal moon.
---
Introducing 1 of the 5 cards in the Promo Pack! (All the cards in the Promo Pack are previews of cards from Set 2)

While being incomprehensible, the name is also ironic, this is one that I like.

Next up, all the information from the article on the official site! 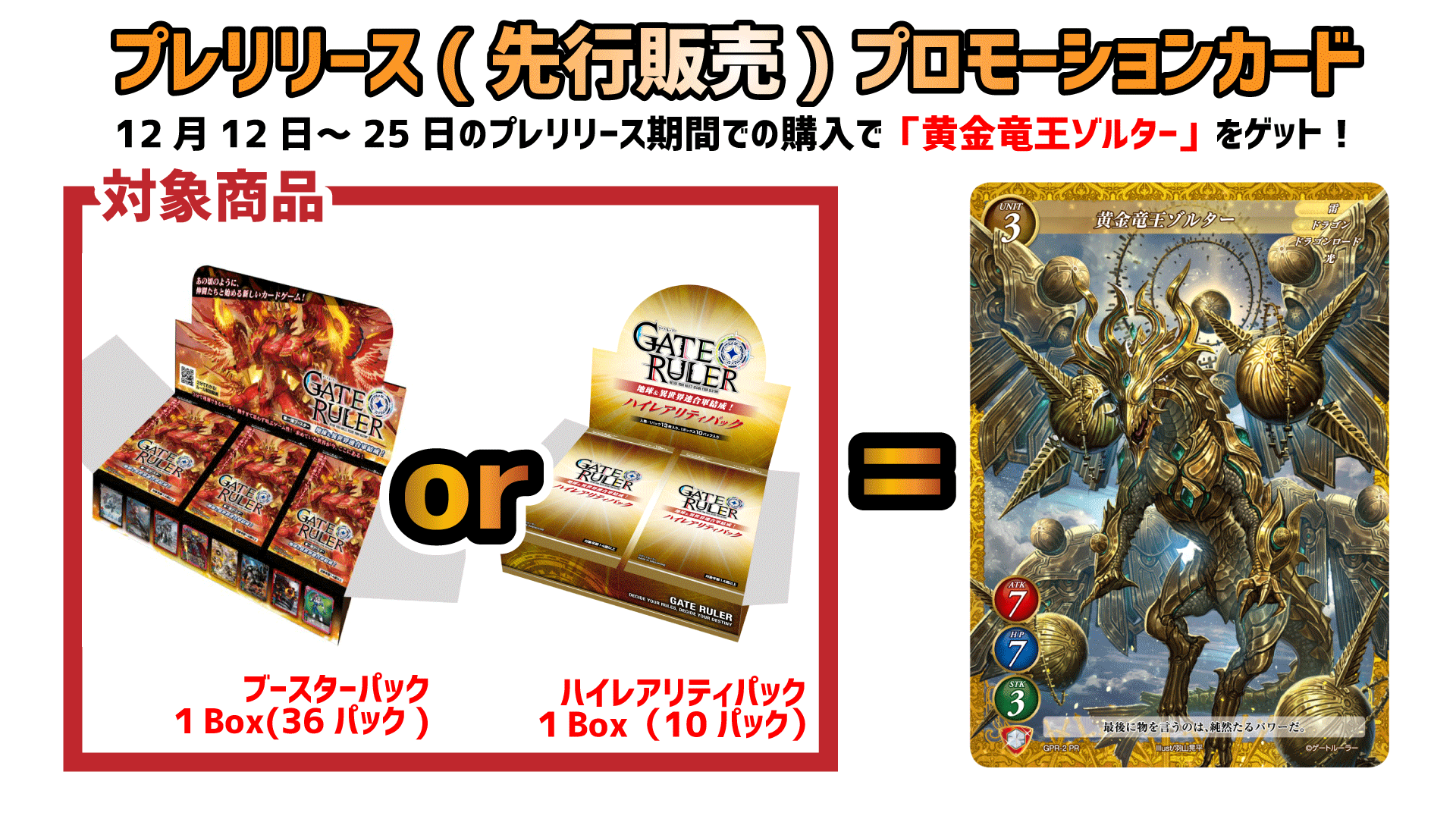 1 "Gold Dragon King, Zoltar" will be included with each Normal or High Rarity box purchased from December 12th to 25th. 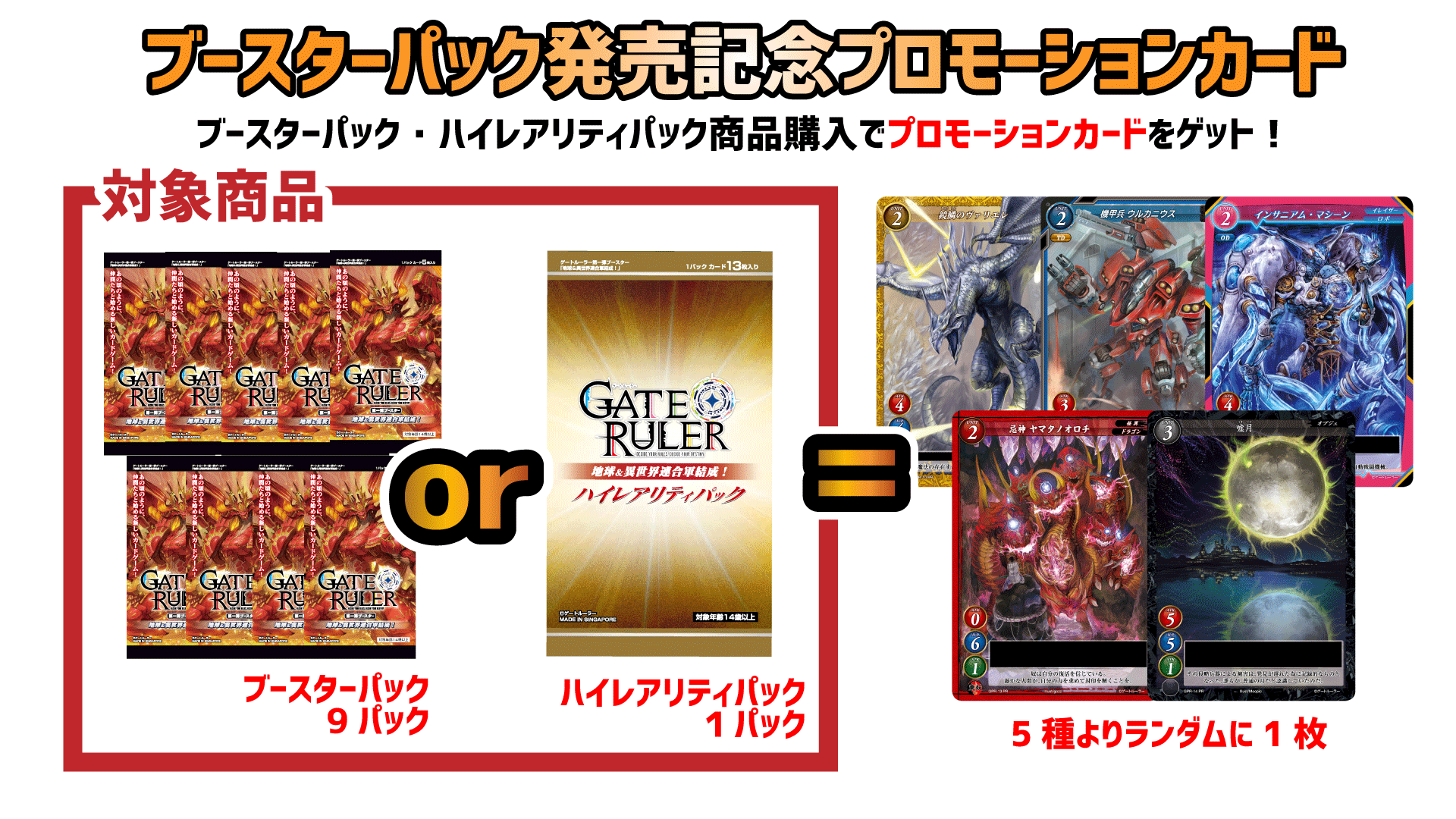 From December 26th onwards, customers will get 1 promo pack with each purchase of:

A system that could be called similar to early Buddyrares from Buddyfight! Where a card from each faction that will be in the next set are available, to get a sneak peek and a small gameplay taste of what's coming next. 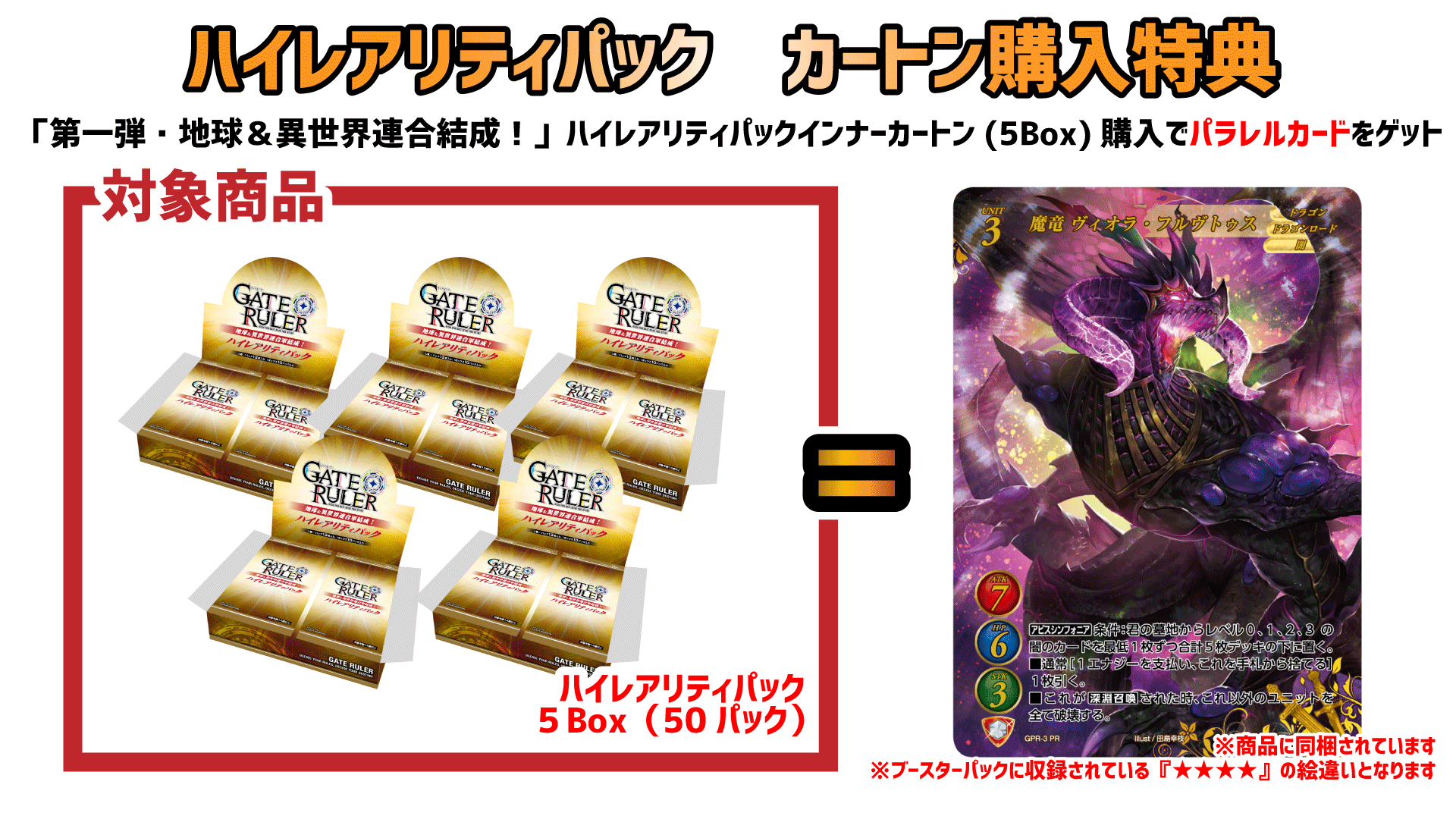 As a bonus for buying 1 case of the High Rarity Pack, you will get 1 "Demon Dragon, Viola Fluvdus" (alternate artwork of a Set 1 ★★★★)

This applies to both pre-release and full release product. 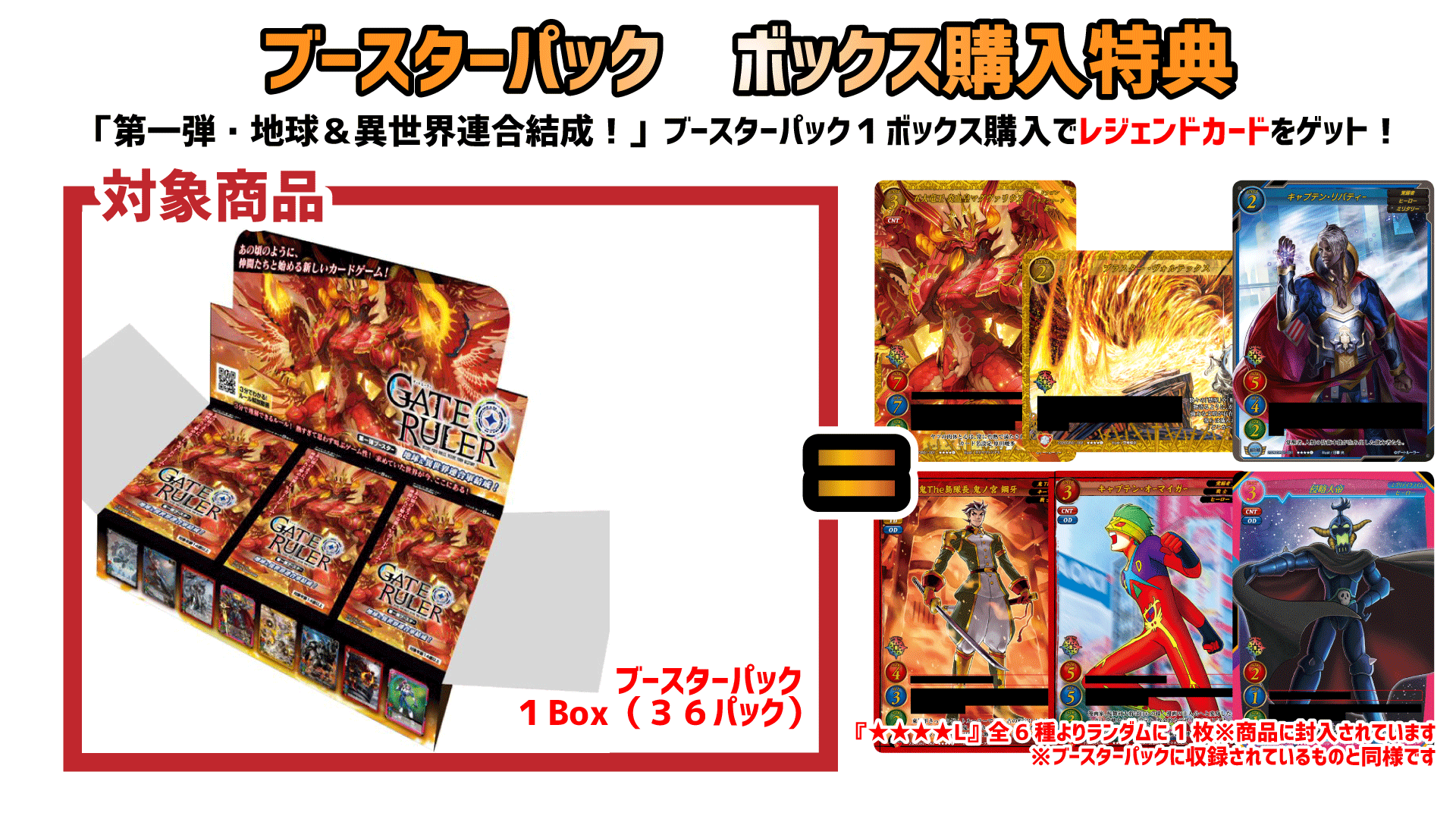 As a box topper in the normal booster boxes of Set 1, 1 of the 6 ★★★★L will be randomly included.

This applies to both pre-release and full release product.

On the Legends themselves. Its interesting to note that the 2 remaining Legends are both the "collab" units (existing characters of artists who are working on Gate Ruler). As for the effects: Blaster Vortex (the Volnar Event), which has been compared to Mirror Force, is only Level 2. Both Captain Omyger (2nd Yomajin Unit) and Invasion Emperor (Wonderverse Unit) have Overdrive effects, and their effect length seems too short to have multiple effects, so both of these are probably designed for Apprentice specifically. Lastly, despite Invasion Emperor being Level 3, it has incredibly low stats of 2/1/1. Previously Invasion Emperor was hinted to have an effect something along the lines of taking control of an enemy unit, so with that, such low stats for a Level 3 makes enough sense.
Edited by HunterSerge on 19th November, 2020 at 3:05pm CST