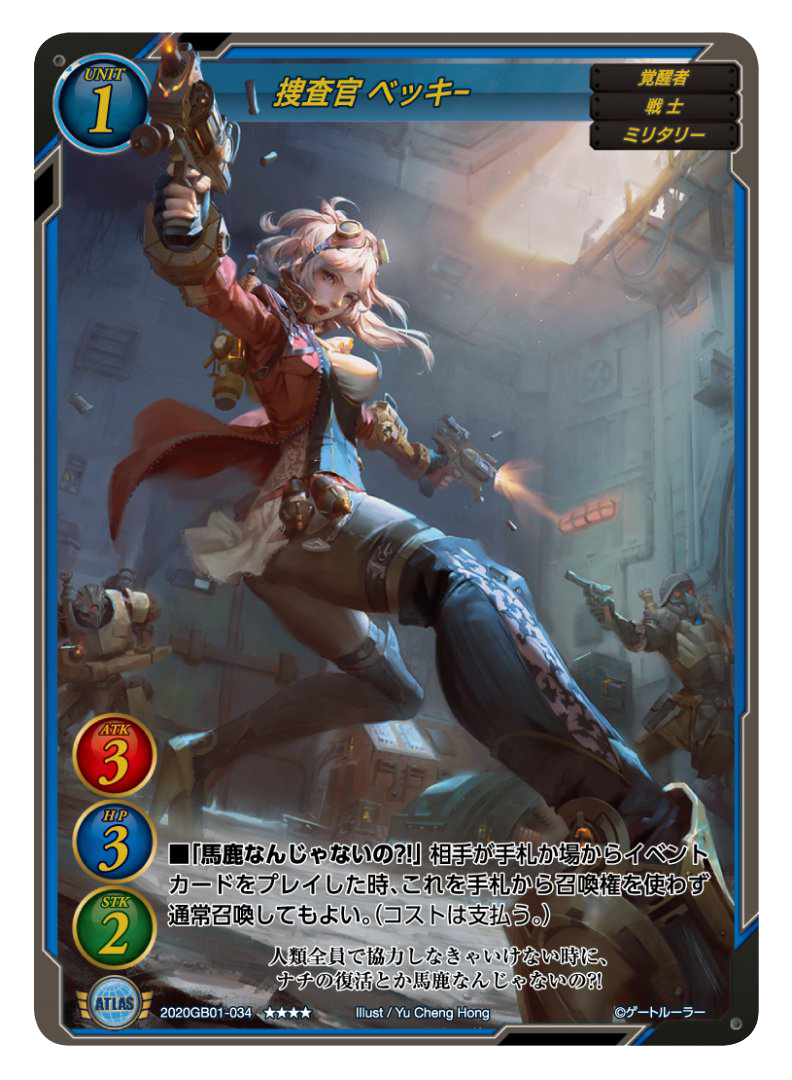 Intelligence Agent, Becky
Card Number: 2020GB01-034 ★★★★
Faction: ATLAS
Card Type: Unit
Level: 1
Attribute(s): Awakened Being, Warrior, Military
ATK: 3
HP: 3
STK: 2
Effect: "Are you stupid?!" When your opponent plays en event card from hand or field, you may normal summon this card without spending Summon Cap. (Pay the cost)
Flavor Text: When all of humanity has to cooperate, those who would create a Nazi resurrection must be morons.

Becky is an incredibly versatile and powerful 4-star for ATLAS! Her effect can be used defensively if your opponent uses any Event like "Star Song" on their turn, or offensively when your opponent uses a defensive Event to get another attack on the board. If you draw Becky in your opening hand, and your opponent gives you the opportunity to activate it on their 1st turn, she effectively becomes free, as the start of turn Energy recharge that you wouldn't be able to take advantage of on turn 1 will more than make up for her 1 Energy cost.

However, I think the most relevant application, is in Genesis Summoning (the official localization term for what we've previously called Creation Summon). She is a Warrior, so she is valid material for "Imperial Wizard, Shiori Rhodia". When your opponent uses an Event to destroy your materials and disrupt your combo, you can use Becky to call her out! And since she doesn't use your Summon Cap, it doesn't matter if you had to summon another unit before Rhodia as some kind of set-up, or if you needed to summon your original material manually. 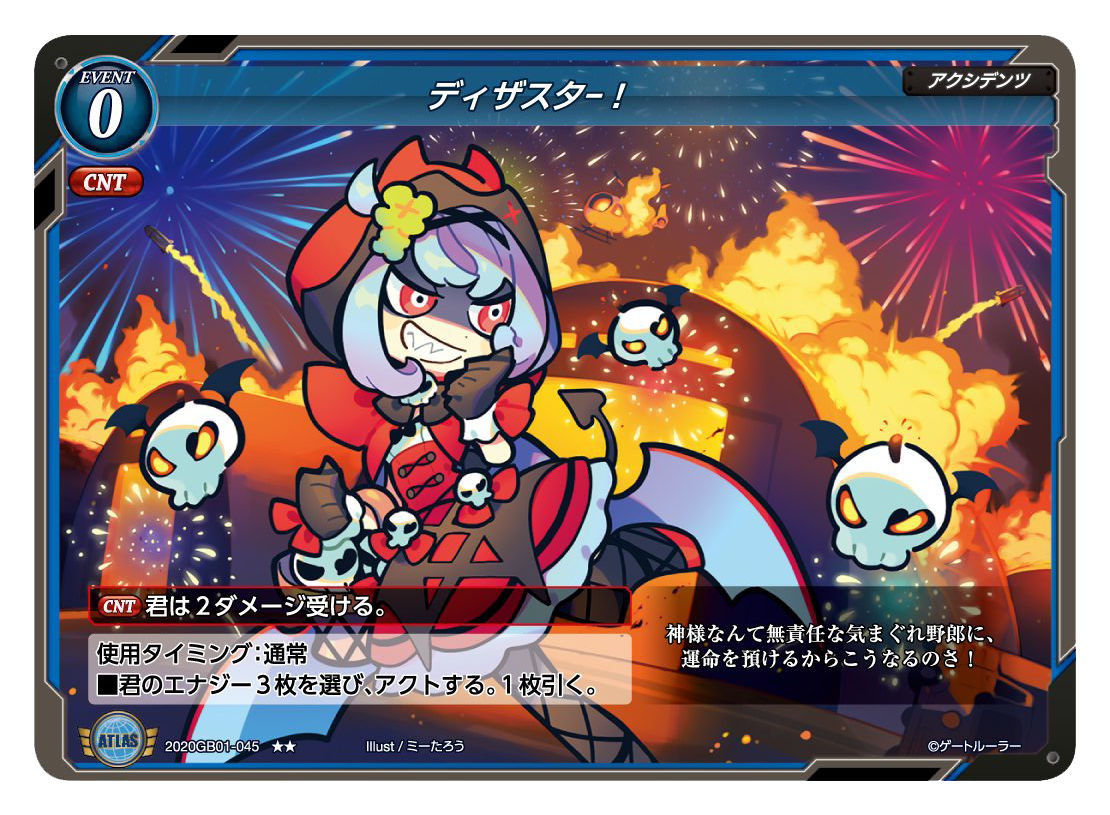 Disaster!
Card Number: 2020GB01-045 ★★
Faction: ATLAS
Card Type: Event
Level: 0
Attribute(s): Accident
Effect: [CNT] You take 2 damage.
Use Timing: Normal
■ Choose 3 energy, and activate them. Draw 1.
Flavor Text: This is what happens when you entrust your destiny to a whimsical bastard like God!

Knight's equivalent to "Haunting"! Unlike "Haunting", you won't get its benefit when you damage it, but you also won't get its downside when you draw it, so its both less and more risky by comparison. The big drawback by comparison is that the benefit of "Haunting" is in deckbuilding stage, so it is helping you in every game you play, while "Disaster" needs to be drawn to benefit you at all. That said, the very high power level of its effect when you do draw it speaks for itself. 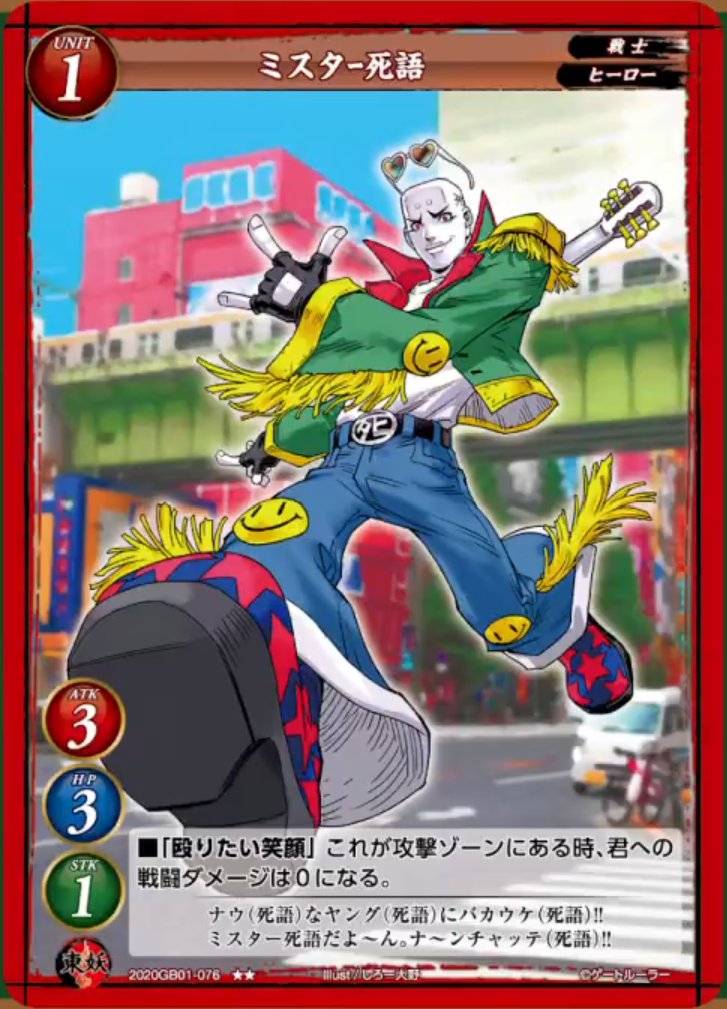 An incredibly powerful defensive effect! It allows you to effectively have another defensive zone, to allow the combat tricks that Yomajin Front excels at to do their job. In addition, its a Level 1 Warrior, so it can be a solid option for Genesis Summoning decks.

Next up! The expandable card pool has been released, through an article on the official website. An English-translated Print Sheet for it is available here. From it, 3 new cards have been revealed, so let's go over those. 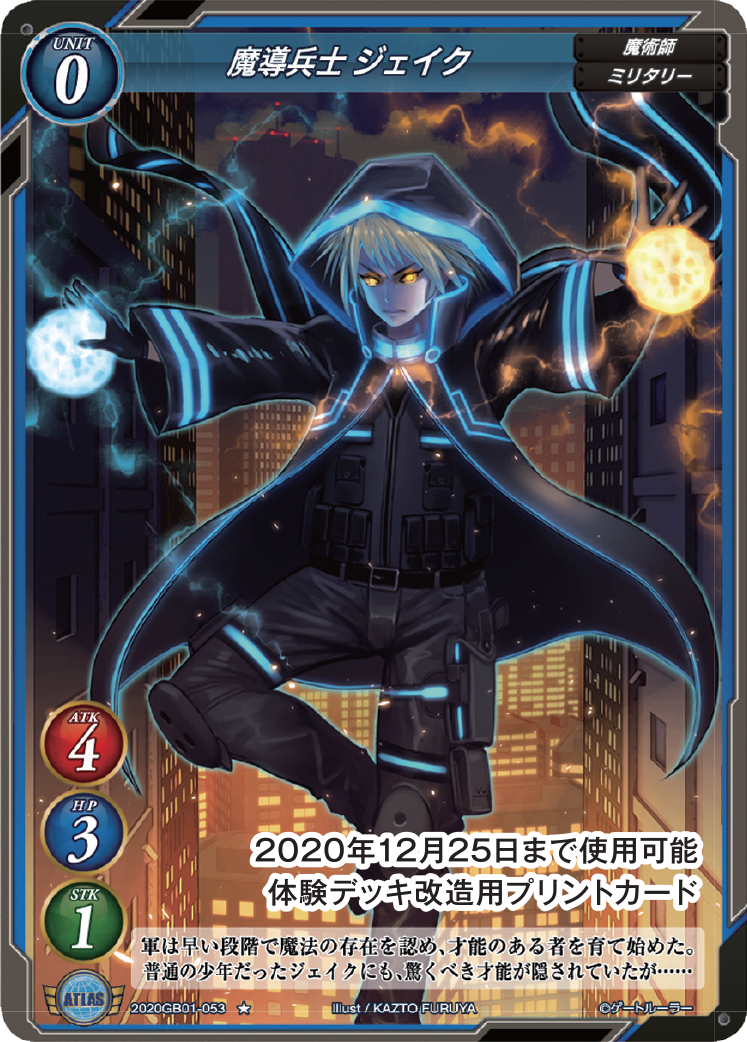 Jake is just a vanilla, but its also the most offensively slanted vanilla Level 0 we've seen in ATLAS so far. Neither of its attributes have been shown to have any support yet, so there's nothing else to say on it. 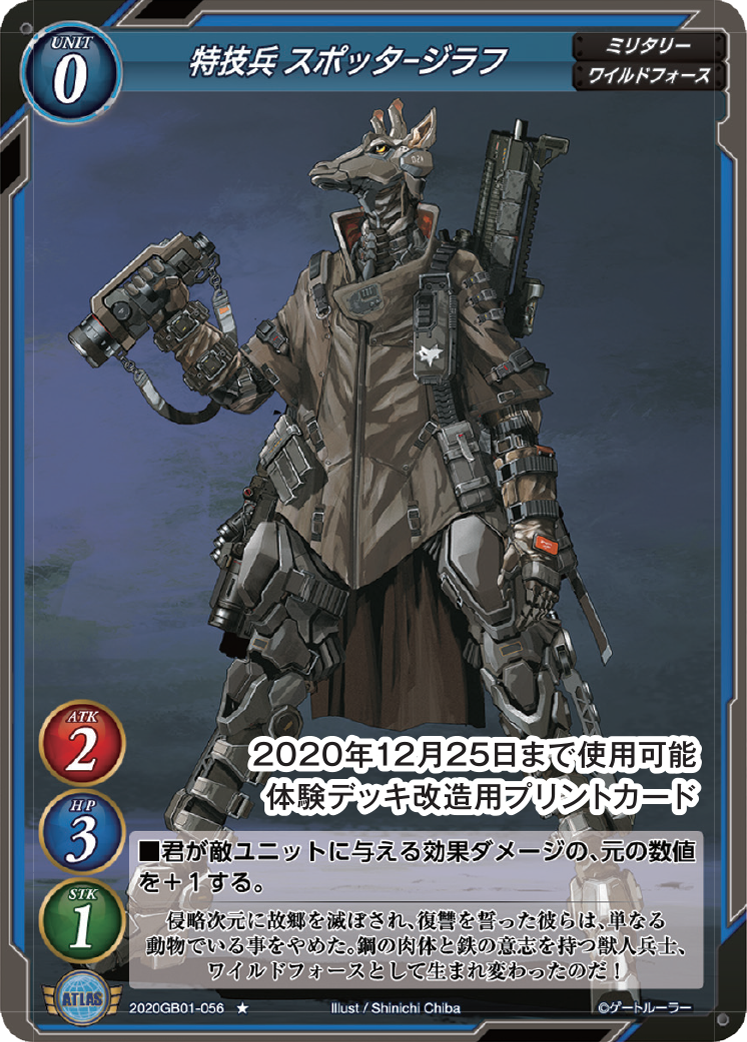 Specialist Soldier, Spotter Giraffe
Card Number: 2020GB01-056 ★
Faction: ATLAS
Card Type: Unit
Level: 0
Attribute(s): Military, Wild Force
ATK: 2
HP: 3
STK: 1
Effect: ■ Give +1 to the original value of effect damage dealt to enemy units by your cards.
Flavor Text: Their home was destroyed by the Exvaders, and those who vowed revenge stopped being mere animals. They were reborn as the Wild Force, beast soldiers with a body of steel and a will of iron!

A very powerful Level 0! More copies of the powerful effect of "Guns & Gold Weapons Arsenal", though being on a unit its much easier to remove. Its stats are pretty defensively slanted, so it can be a bit taxing to get rid of him as well. 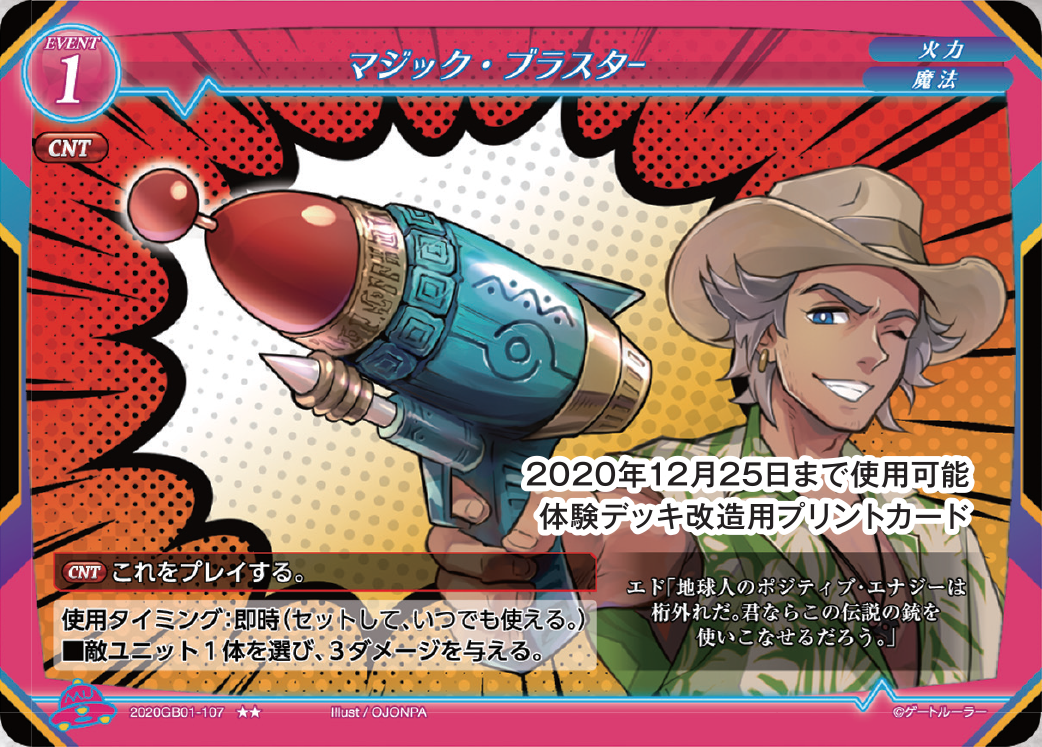 Magic Blaster
Card Number: 2020GB01-107 ★★
Faction: Wonderverse
Card Type: Event
Level: 1
Attribute(s): Firepower, Magic
Effect: [CNT] Play this.
Use Timing: Immediate (Set this, and you may play it at any time)
■ Choose 1 enemy unit, and deal 3 damage.
Flavor Text: Ed "The positive energy of an Earthling is extraordinary. You can master this legendary gun."

A new low cost removal Event for Wonderverse! 3 damage is quite a bit, and able to remove quite a number of good Level 2 and lower units we've seen. It can even remove some Level 3s, like Busterkong! However, there's a big trade-off due to this being a CNT, since as a CNT it is far inferior to big removal like "Buster Arm!" or "Destiny Sword". This trade-off will be most felt in Energy Rulers, since with a Level Limit Ruler you're going to see the benefit of the lower Level no matter how its played. Based on preliminary deckbuilding myself and many in the discord have done, its clear that CNT limits are super tight, so making a trade like this in Energy Rulers is a really big deal, but even still, for them having access to a low cost decent damage Event like this may be worth it.

And next, exciting news that comes from our own discord. Recently, Y. "Miracle" Shindo, the rules manager for Gate Ruler, which means he constructs the comprehensive rules and makes sure card syntax is consistent, joined our discord and has been answering various questions. Many ruling questions have been answered, which you can go look at in the discord's #ask-questions channel, and we will likely make an article in the future covering them, but here we'd like to focus on the official localizations of game terms that he's provided.

DISCLAIMER: These are still subject to change.

On the left is the term we've been using in our translations up to now.

Overall, these localizations sound very good, though there are a few stand-out ones. "Counterattack" becoming "Retaliate" is fantastic, because one of Buddyfight's most frequent ruling misconceptions was thinking that because it had "attack" in its name, it created an attack when it was effect removal. With "attack" completely absent from the new name, such confusion is unlikely. "Penetrate" becoming "Breakthrough" is a good change from Buddyfight for what should be obvious reasons. The only change we think is any worse is "Soulguard" becoming "Charge Shield". The name itself is fine, but "Charge Shield" does not roll off the tongue nearly as well as "Soulguard" did. Also, while it hasn't been confirmed, its likely "soul" is itself changed to "charges".

Finally, on to various interesting tweets from Ikeda.

Q: Isn't it possible to keep "Haunting" or "Disaster" in your hand when you draw it?

A: The official rule in Gate Ruler is "At the end of the game, reveal your hand and face down cards, or you will be disqualified", so be careful.

This is a good solution to something that many members of our community were worried about. Its only potential issue is if we ever saw effects that could return cards from hand to deck. Though the fix there would just be to make all such cards reveal the card you're returning, which would hardly restrict card design.

The number of Gate Ruler character sleeves produced is very small by comparison to the number of booster packs and starter decks produced. (Mistaken prediction)

For the time being, there are no plans to do additional print runs for any of these, except for the card back design sleeves.