Posted on 4th December, 2020 at 7:11pm CST
Today we have exciting news! Thanks to Deci, we have obtained images of the Gate Ruler cards revealed in Card Gamer Magazine Vol. 55! Deci makes quality content for the Digimon Card Game, so be sure to give him a watch. Now, before we talk about the Card Gamer reveals, let's discuss the new influencer reveal!

December 4th's only influencer reveal is Wonderverse Unit "Horror Corps, Samerian", and comes from this video from flat.

Flat is a very large Duel Masters channel with over 130k subscribers and whose videos consistently surpass 100k views, so videos from them will signal boost the game quite a lot in Japan, and we're pretty sure flat is the largest influencer currently in the program. To give proper perspective, flat is similar in size to the likes of Cimo or Tolarian Community College. While flat's subscriber count is much lower than both, his average views are much higher than either. 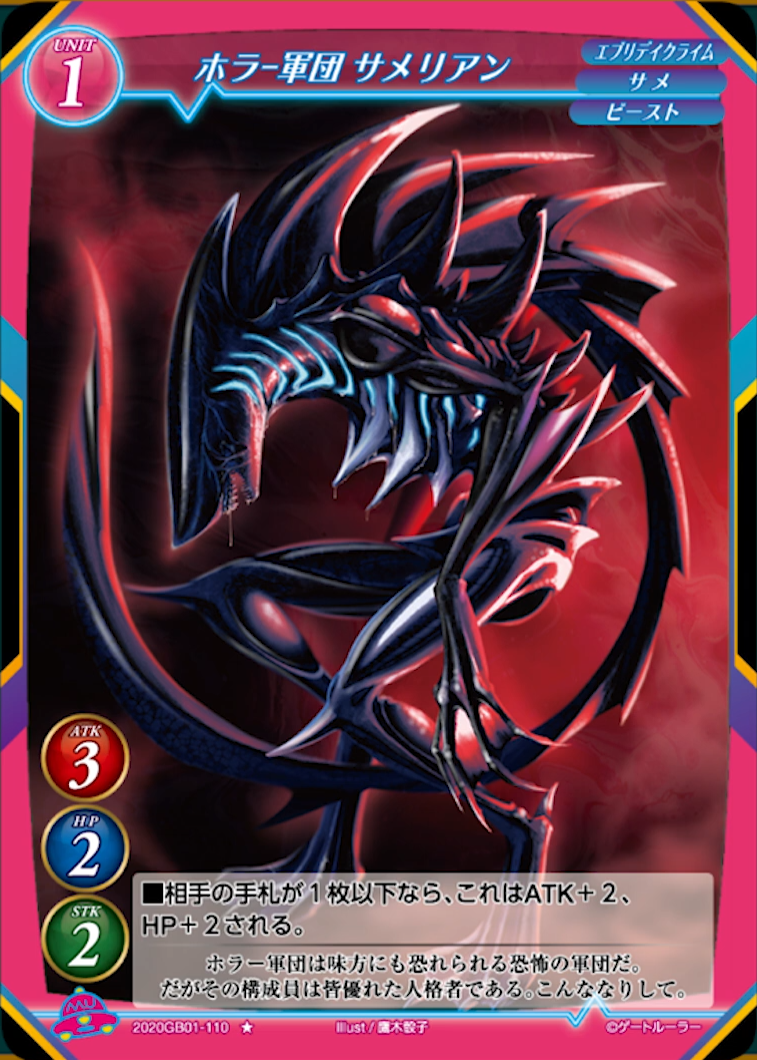 Horror Corps, Samerian
Card Number: 2020GB01-110 ★
Faction: Wonderverse
Card Type: Unit
Level: 1
Attribute(s): Crimenauts, Shark, Beast
Attack: 3
HP: 2
Strike: 2
Effect: If your opponent has 1 or less cards in hand, this gets ATK+2 and HP+2.
Flavor Text: The Horror Corps is a terrifying group feared even by their allies. However, all the members have excellent personalities.

With this, we have a pay-off for the hand control strategy of the Horror Corps, and a super strong one at that! 5/4/2 for Level 1 is incredibly good, and against Apprentice you never even have to set it up. If the game has sideboards, this is certain to be a popular sideboard choice, especially for Beast decks, due to how it punishes Drive Rulers by instantly being a 5/4/2 that can be buffed even further through "Forest of Killers"! 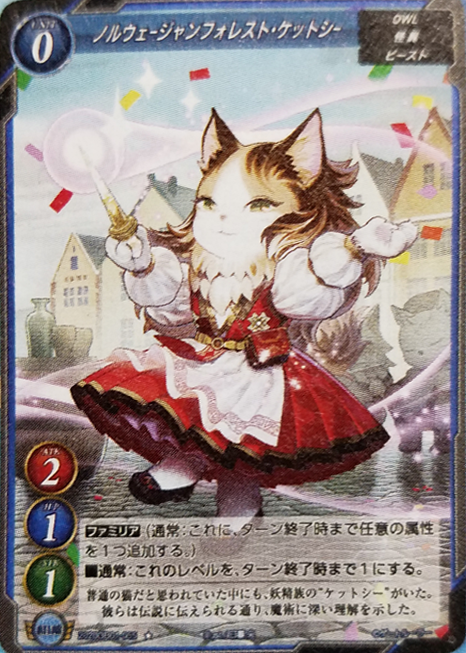 Norwegian Forest Cait Sith
Card Number: 2020GB01-055 ★
Faction: ATLAS
Card Type: Unit
Level: 0
Attribute(s): OWL, Apparition, Beast
ATK: 2
HP: 1
STK: 1
Effect: [Familiar] (Normal: This unit gets any attribute until end of turn.)
■ Normal: This card becomes a Level 1 until end of turn.
Flavor Text: Even though he was thought to be an ordinary cat, he was a member of the fairy tribe "Cait Sith". According to legend, they have a deep understanding of witchcraft.

The first card from Card Gamer is a new Cait Sith. This is just a clone of "Hydra Familiar" ultimately, but redundancy is always nice to have. It loses 1 stat point by comparison due to its 3 attributes, but we'll really have to wait and judge on those. Apparition support has only been in Yomajin Front so far and that combination would lose us access to Genesis Summoning, unless we use it in World Master or Highlander, which has its own problems. Meanwhile, OWL has no support to speak of currently revealed, so in many ways this is a card we'll need to revisit at a future date. 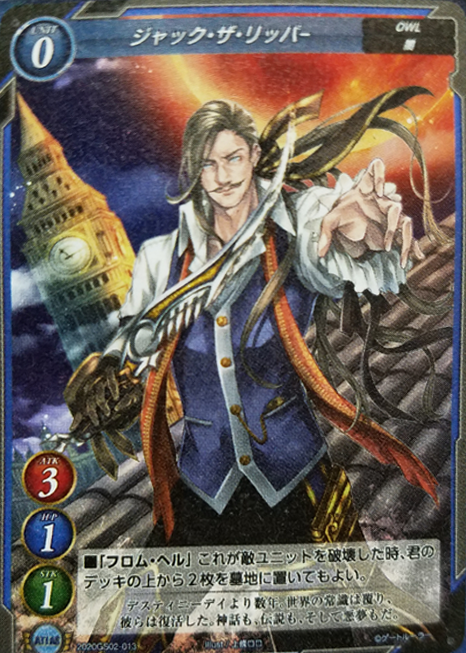 Jack the Ripper
Card Number: 2020GS02-013
Faction: ATLAS
Card Type: Unit
Level: 0
Attribute(s): OWL, Darkness
Attack: 3
HP: 1
Strike: 1
Effect: ■ "From Hell" When this destroys an enemy unit, you may put the top two cards of your deck into your cemetery.
Flavor Text: A few years after the arrival of the Destiny Sword, the common sense of the world has been disrupted, and many myths, legends, and villains have been resurrected.

Second up, we have Jack the Ripper from the 2nd Starter Deck! More mill support for Darkness. Mill effects continue to be very costly. Previously we saw the "on attack mill 1" effect of "Follower of Demonic Dragon" cost it 4 stat points, and this more conditional mill effect costs it a whole 3 stat points. Regardless, its definitely worth it. Outside of Darkness, these mill effects could also find use in Exvader decks, to allow you to set up Exvaders in the cemetery for "Liar Moon" and "Deboweler". 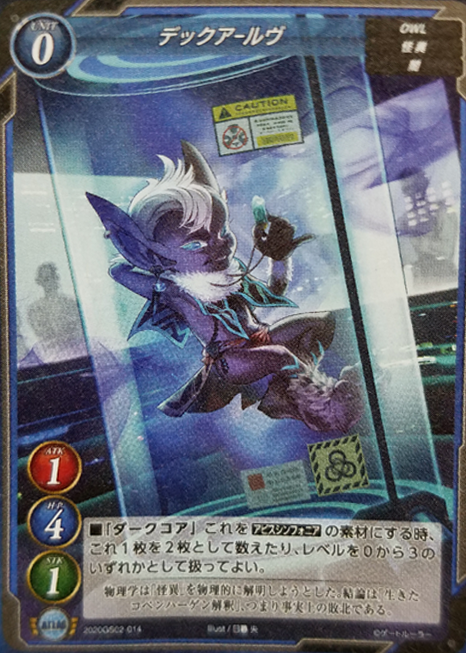 Dökkálfar
Card Number: 2020GS02-014
Faction: ATLAS
Card Type: Unit
Level: 0
Attribute(s): OWL, Apparition, Darkness
Attack: 1
HP: 4
Strike: 1
Effect: ■ "Dark Core" When this is used as a material for [Abyssal Concerto], you may count this as two cards or treat this as any level from 0 to 3.
Flavor Text: Physicians sought to unravel the "mystery". The conclusion is that its a "living Copenhagen interpretation", a de facto defeat.

Our last Card Gamer reveal is yet another Darkness support card from the 2nd Starter Deck! A very powerful effect that makes it easier to achieve all your [Abyssal Concerto] conditions, and especially versatile when it comes to the summoning of "Demon Dragon, Viola Fluvdus". Ikeda has previously mentioned a 2nd [Abyssal Concerto] unit in the Starter Deck, which only requires 2 Darkness for its condition, and this card would fulfill it completely all on its own! You could even summon it immediately by summoning "Dökkálfar" and then summoning another unit on top of it to send it to the cemetery.

On top of that, his very defensively allocated stats also make him a great fit for the strategy. Darkness will want to utilize the defensive zone quite a bit while setting up, to survive longer and to force the opponent to put a Darkness unit into their cemetery. Its 4 HP makes it much more likely to be an effective defender, and when it hits the cemetery its providing twice as much as any other unit. This feels like it will be a staple in the strategy for quite a while.
Edited by HunterSerge on 4th December, 2020 at 7:14pm CST