Posted on 8th December, 2020 at 1:46pm CST
First, we have the remaining December 8th card reveal, from a video by Kuroto Ginta, is the final ATLAS Unit from GB01, "Specialist Soldier, Bullseye Wolf"! 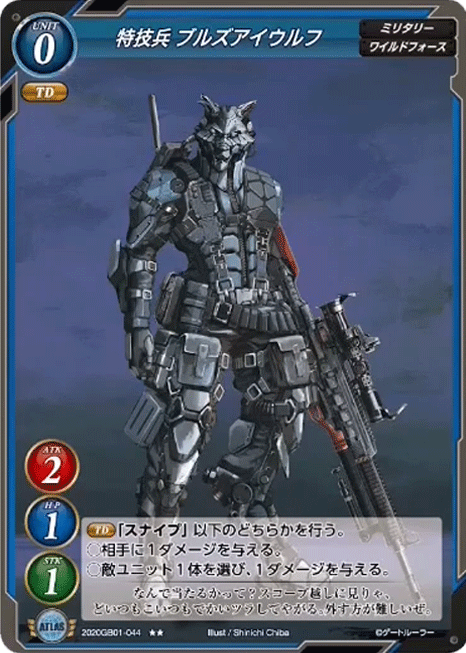 Specialist Soldier, Bullseye Wolf
Card Number: 2020GB01-044 ★★
Faction: ATLAS
Card Type: Unit
Level: 0
Attribute(s): Military, Wild Force
ATK: 2
HP: 1
STK: 1
Effect: ■ Choose one of the following:
・Deal 1 damage to your opponent.
・Choose 1 enemy unit, and deal 1 damage to it.
Flavor Text: Why do you fight like that? When you look through the scope, its always a benefit. Its difficult to go back.

While the damage it deals is small, the damage boosting cards in ATLAS are able to turn this into a significant amount of damage once you're set up, giving this Level 0 a ton of value. With Capture Beam and ARK its very easily recurrable as well. And then there's the face damage mode, which up to now has been unique to CNT cards, making it valuable just on that front, but it also has the great interaction Big Owl, allowing you to activate his draw effect during your main phase. (We forgot that Big Owl is only on attack, this interaction does not exist)

The rest of today's reveals are twitter reveals from Ikeda. 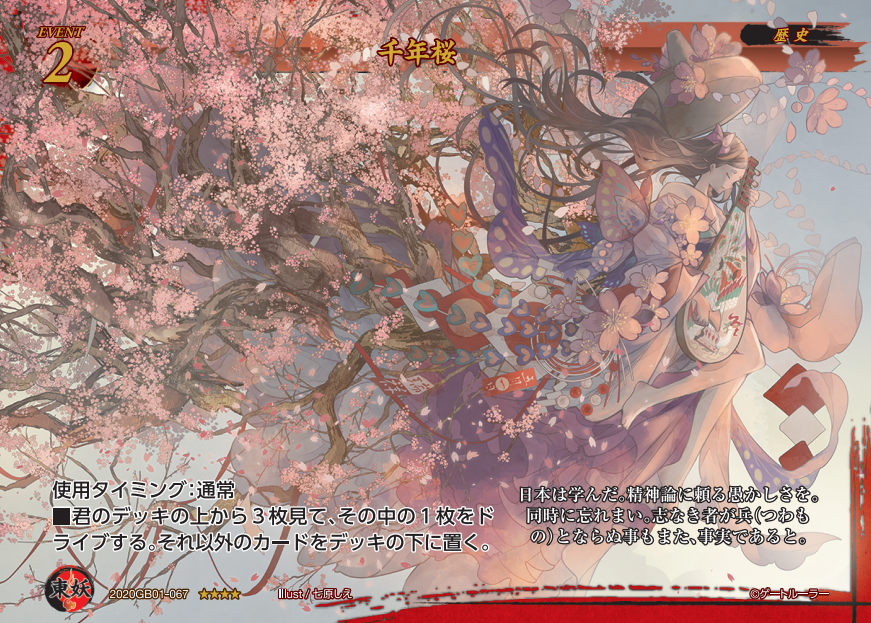 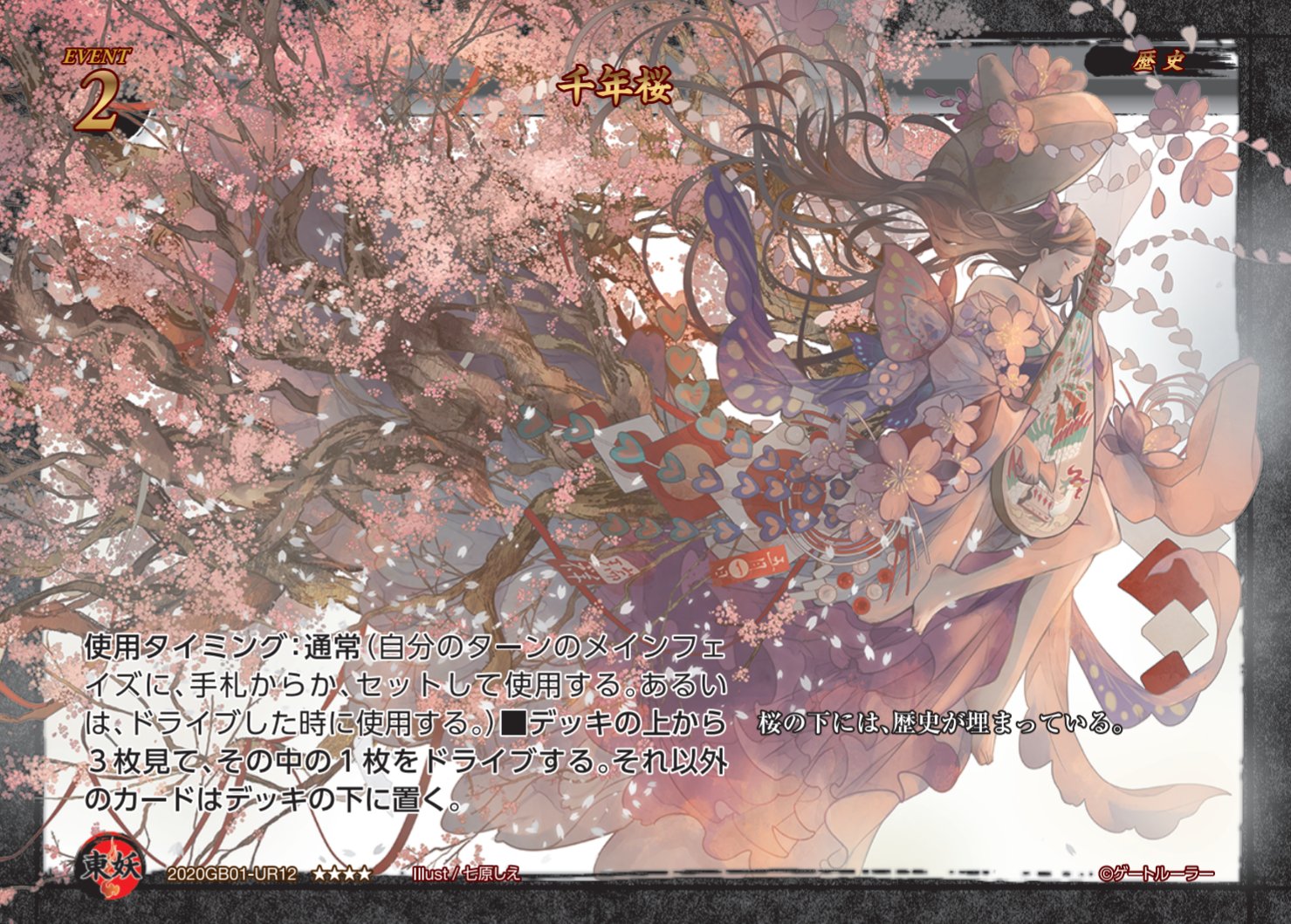 Thousand-year Cherry Tree
Card Number: 2020GB01-067 ★★★★
2020GB01-UR12 ★★★★
Faction: Yomajin Front
Card Type: Unit
Level: 2
Attribute(s): History
Effect: Use Timing: Normal (Play during the main phase of your turn)
Use Timing: Normal
■ Look at the top three cards of your deck, and drive one of them. Put the remaining cards on the bottom of your deck.
Flavor Text (Normal): Japan learned. The wonder of relying on spiritual theory. At the same time, do not forget. It is also true that an unwilling person does not become a soldier.
Flavor Text (Uber): Underneath the cherry blossoms, history is understood.

About half a year ago, the illustration were revealed, and the effects were kept secret.

The content is similar to a search card...a card that be played as a level 2 event to get a level 3 unit, the highest level of support card that can dig 3 cards into your deck and stabilize your board.

An extremely powerful generic support card for Apprentice and Highlander decks! It checks 1 card less than the archetypal versions like "Emergency Combination" and "Space Criminal Organization, Crimenauts", but in exchange it doesn't eat into your CNT slots! Stuff like this continues to give more value to cards like Yobuko and Christel, allowing you to generate card advantage in Apprentice and then get high value out of them by activating at the right time. 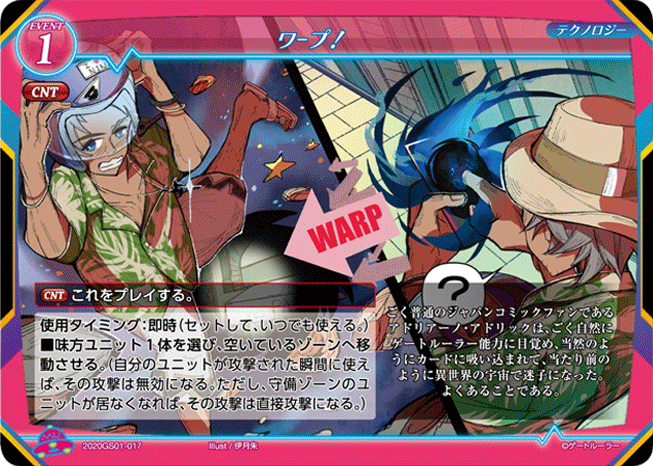 Warp!
Card Number: 2020GS01-017
Faction: Wonderverse
Card Type: Event
Level: 1
Attribute(s): Technology
Effect: [CNT] Play this.
Use Timing: Immediate (Set this, and you may play it at any time)
■ Choose 1 ally unit, and move it to an empty zone. (If you use it on a card that was attacked, the attack fizzles. If it was moved away from the defensive zone, that attack becomes a direct attack.)
Flavor Text: An ordinary Japanese comic fan, Adriano Adrick, naturally awakened to the Gate Ruler power, was naturally sucked into a card, and naturally got lost in the universe of another world. Its common.

The Wonderverse is a faction with more events than any other. Various abilities like "movement", "rearrangement", and "attack redirection" are only in Wonderverse. You can force the opponent's attack to hit a [Retaliate] unit.

While we've seen redirection cards before, being able to entirely move a unit is completely different. Being able to punish your opponent for swinging into a side by fizzling the attack seems very good, particularly in Crimenauts. For example, with Malevolus and Badmans in your attack zones, Badmans eats the first attack, then when your opponent tries to remove Malevolus on the 2nd attack, you can use Warp to move it to another zone and keep Malevolus around even longer. Being able to give all but a few units a pseudo-Defender is very nice as well. 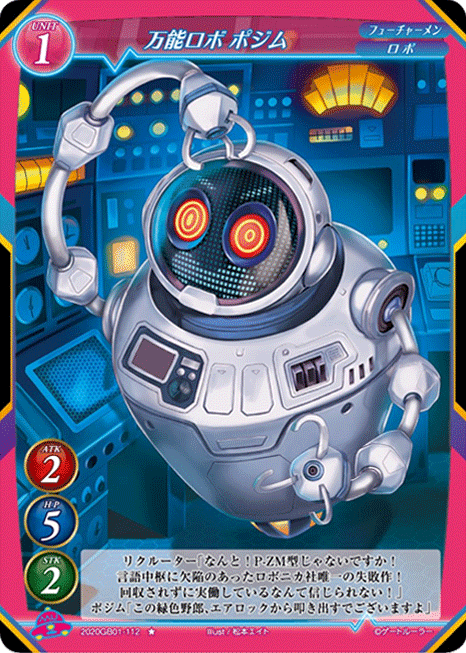 A new Robo vanilla! Emergency Combination is an extremely powerful card, so getting more Robos, especially low level that aid a ton in boosting the consistency of activating Emergency Combination is very useful. Also, only just now realizing this, but Robo is another taxed attribute, as can be seen on Pojimu and "Guardian", having 11 stat points compared to the 12 on Bulltaurus, Turret Turtle, and others. 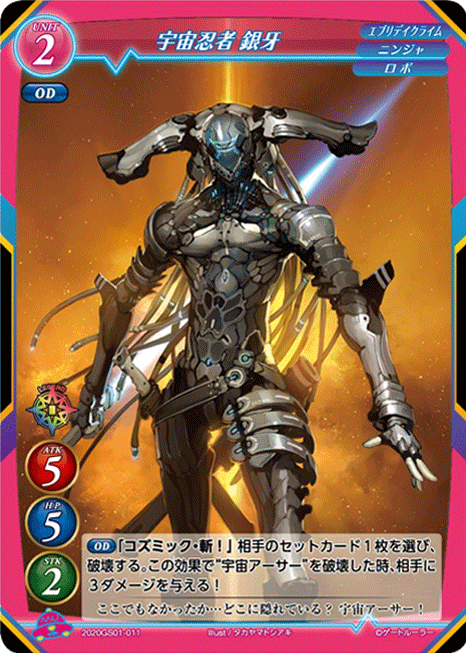 The Starter Deck Legend for GS01! Unfortunately, this is the least impressive Legend so far. It at least has the valuable attributes of Crimenauts and Robo, and doesn't eat a CNT slot, but destroying a set at Level 2 isn't very unique. Its stat line is better, but not by that wide of a margin compared to Gachihorror, who is also able to force a discard.

On the other hand, if you can get off its anti-Arthur effect, it can be one of the strongest Legends that exist. This is a card that's viability will change massively depending on if there's a sideboard. 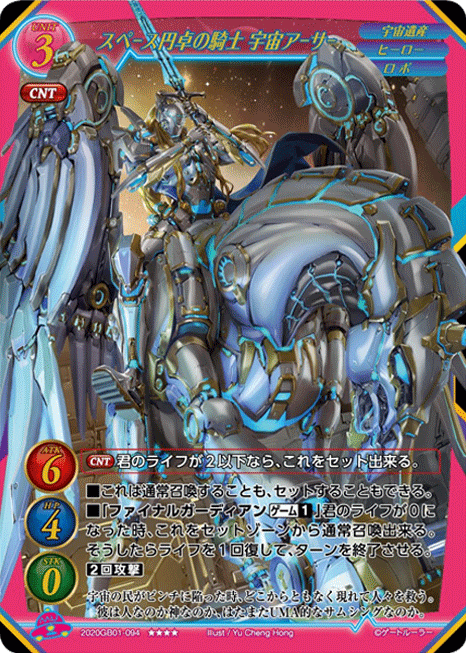 Space Knights of the Round Table, Space Arthur
Card Number: 2020GB01-094 ★★★★
Faction: Wonderverse
Card Type: Unit
Level: 3
Attribute(s): Galaxy Heritage, Hero, Robo
Attack: 6
HP: 4
Strike: 0
Effect: [CNT] If your life is 2 or less, set this.
■ This can be normal summoned, and also can be set.
■ "Final Guardian [Game(1)]" When your life becomes 0, you can normal summon this from the set zone. Then, recover 1 life, and end the turn.
Flavor Text: When the people of space are in a pinch, he appears out of nowhere and saves them. Is he a person, a god, or an UMA-like thing? 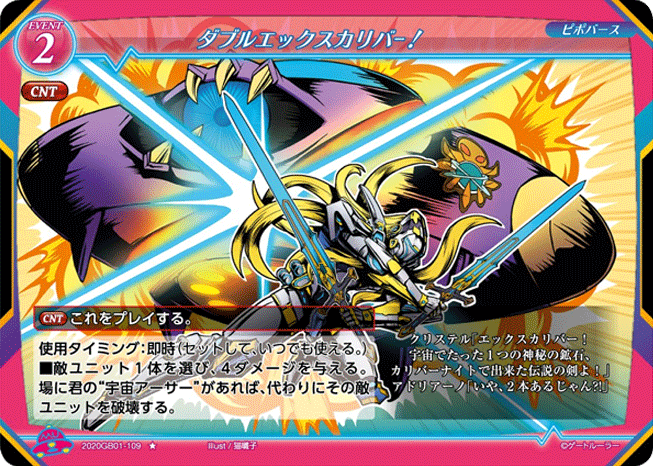 Double Excalibur!
Card Number: 2020GB01-109 ★
Faction: Wonderverse
Card Type: Event
Level: 2
Attribute(s): Bipoverse
Effect: [CNT] Play this.
Use Timing: Immediate (Set this, and you may play it at any time)
■ Choose 1 enemy unit, and deal 4 damage to it. If "Space Arthur" is on your field, destroy that enemy unit instead.
Flavor Text: Christel "Excalibur! There's only one in the universe, a legendary sword made out of the mysterious ore, Knight Calibur!"
Adriano "But there are two?!"

Space Arthur is finally revealed! As was hinted, its a revival card, very similar to Burn Nova! Its completely defensive, made unable to deal damage to your opponent directly, though its Double Attack still makes it very good at clearing board. Being a Robo also means it can be converted into another unit that can attack with Emergency Combination.

Then we have Double Excalibur! Its normal mode is definitely very inefficient compared to Magic Blaster and ZAPZAPZAP!!. The far more situational Space Arthur version on the other hand is a cheaper Destiny Sword, so if you build around Space Arthur, it could be a powerful card. 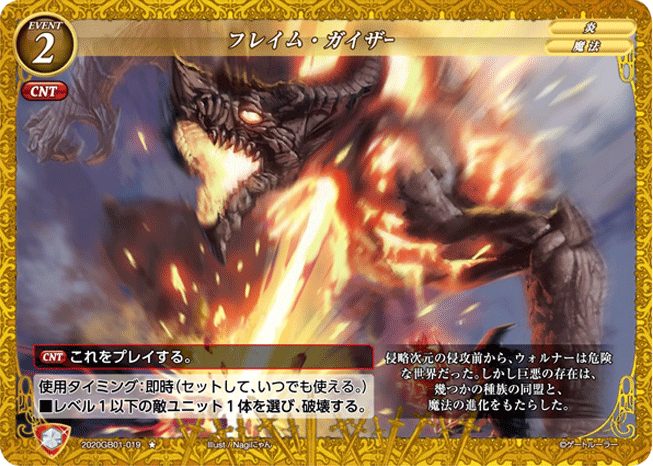 Flame Geyser
Card Number: 2020GB01-019 ★
Faction: Volnar
Card Type: Effect
Level: 2
Attribute(s): Fire, Magic
Effect: [CNT] Play this.
Use Timing: Use Timing: Immediate (Set this, and you may play it at any time)
■ Choose and destroy 1 level 1 or lower enemy unit.
Flavor Text: Before the Exvader invasion, Volnar was a dangerous world, but the existence of a great evil brought about an alliance of many races and an evolution of magic.

It looks like a plain card, but it could suddenly get a lot of attention in a metagame where vanilla cards that are too bulky for effect damage are commonly used.

I don't think it will see play immediately, but its a card to keep in mind. 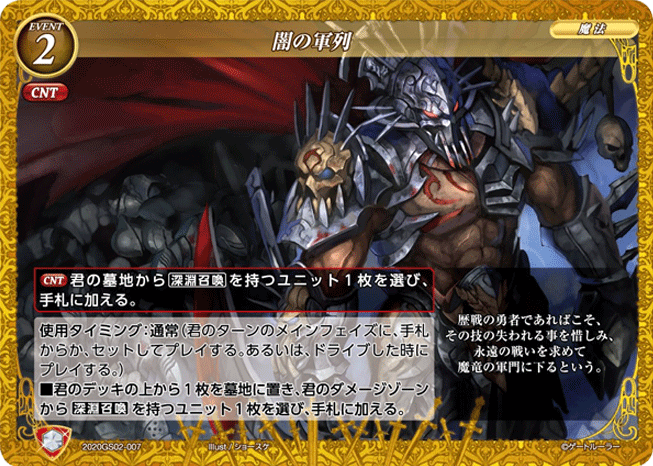 Army of Darkness
Card Number: 2020GS02-007
Faction: Volnar
Card Type: Event
Level: 2
Attribute(s): Magic
Effect: [CNT] Choose 1 unit with [Abyss Summoning] in your cemetery, and add it to your hand.
Use Timing: Normal (During the main phase of your turn, play this from hand, set it and play it, or play it when you drive)
■ Put the top card of your deck into your graveyard. Choose 1 unit with [Abyss Summoning] from your damage zone and add it to your hand.
Flavor Text: It is said that when veteran heroes lose their skill, they go to the gate of the demon dragon's army in search of eternal battle. 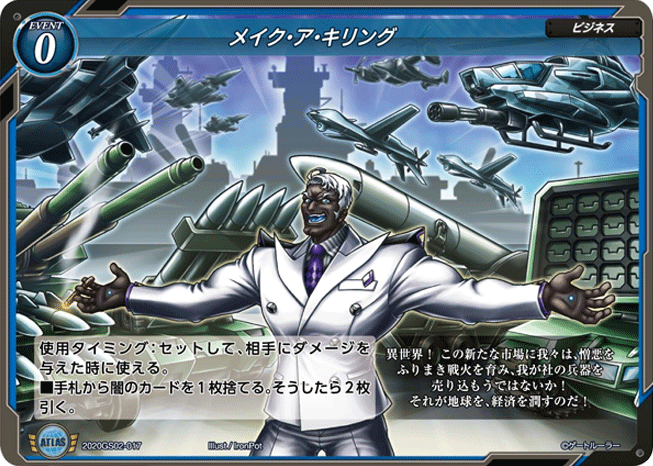 Make a Killing
Card Number: 2020GS02-017
Faction: ATLAS
Card Type: Event
Level: 0
Attribute(s): Business
Effect: Use Timing: Set this, and you may play it when your opponent is damaged.
■ Discard a «Darkness» card from your hand. If you do, draw 2.
Flavor Text: A different world! Let us sprinkle hatred, foster war, and sell weapons in this new market! It nourishes the earth and the economy!

Two very powerful Events for Darkness from GS02! While "Make a Killing" has an awkward timing, its set up of the cemetery is very handy, and gets you deeper in deck towards cards that matter, all at no energy cost.

On the other hand, "Army of Darkness" is another of the very powerful "damage toolbox" cards you get, healing you while getting you your important cards. Despite being a Level 2, Johan existing means playing this and going into an Abyss Concerto is very doable as well. 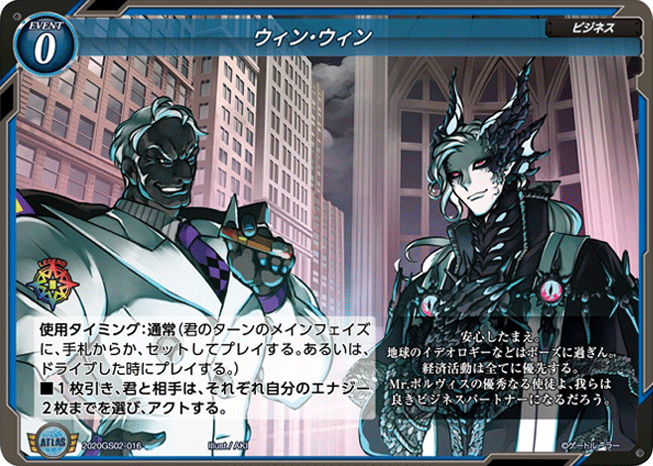 Win Win
Card Number: 2020GS02-016
Faction: ATLAS
Card Type: Event
Level: 0
Attribute(s): Business
Effect: Use Timing: Normal (During the main phase of your turn, play this from hand, set it and play it, or play it when you drive)
■ Draw 1, and both you and your opponent can choose up to 2 their own energy, and activate them.
Flavor Text: Rest assured. The ideology of the earth is just a front. Economic activity takes precedence over everything. Good apostle of Vastorus, we will be good business partners.

A Legend card from the Starter Deck "Demon Dragon Summoning". Its a Legend card that anyone can easily obtain, but its actually very strong. Its so powerful that its often chosen over other Legends.

And now is the other Starter Deck Legend! Very powerful Legend for any Knight deck, allowing you to make plays similar to what "Disaster" allows, without Disaster's drawback. It has its own downside of course, but right now, its very easy to get around. Nothing but Knight can take advantage of it, but with the low max energy of Knight, its pretty difficult for your opponent to get out of it. However, players should be careful of giving the opponent the energy to use a set Events that they wouldn't have been able to before.

The 2nd playtest is now underway.

Its obvious that the 2nd set will sell if its stronger, but you can't invalidate the decks players collected rare cards for over the past 3 months. (that's what we think)

What you need to do is make the 1st set cards more appealing with the 2nd set.