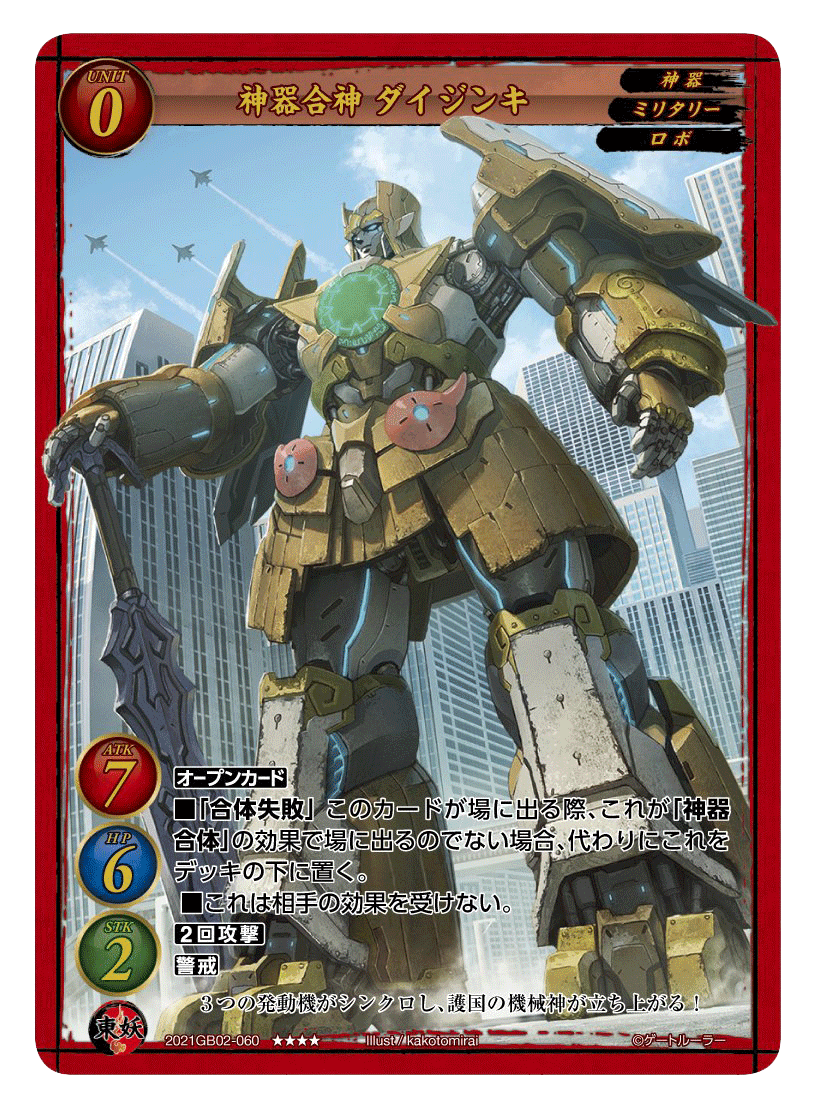 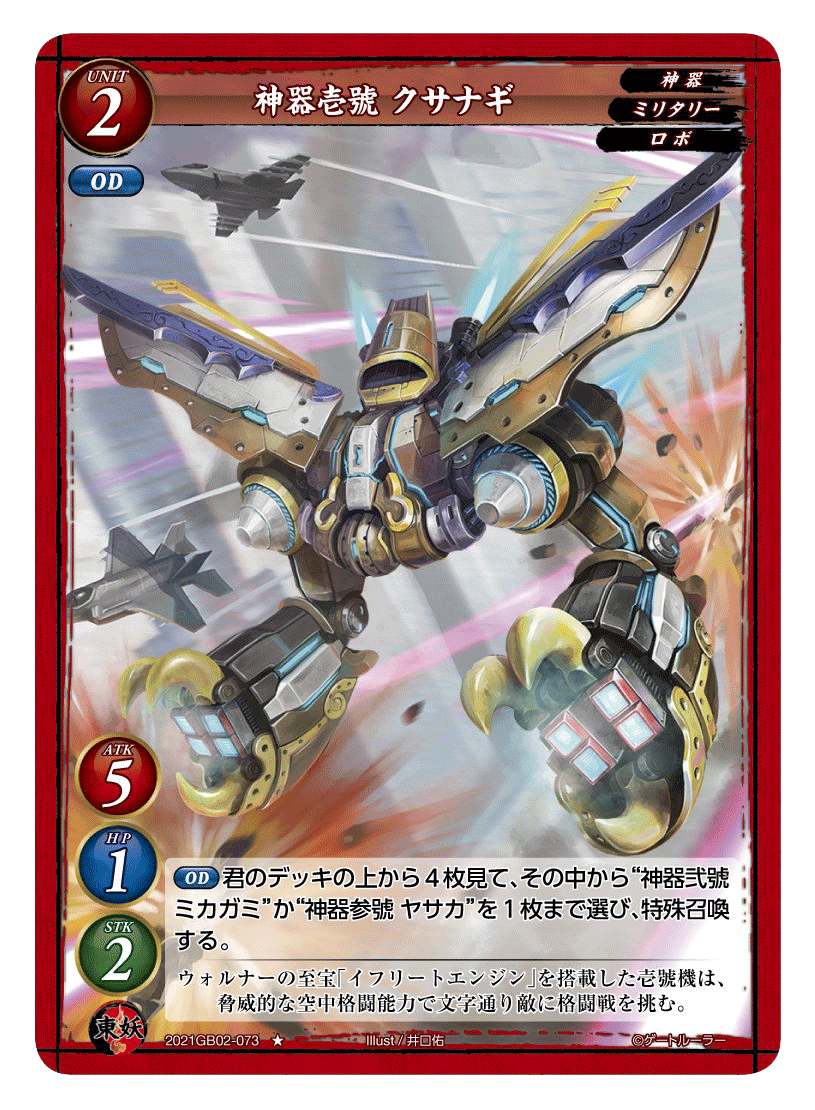 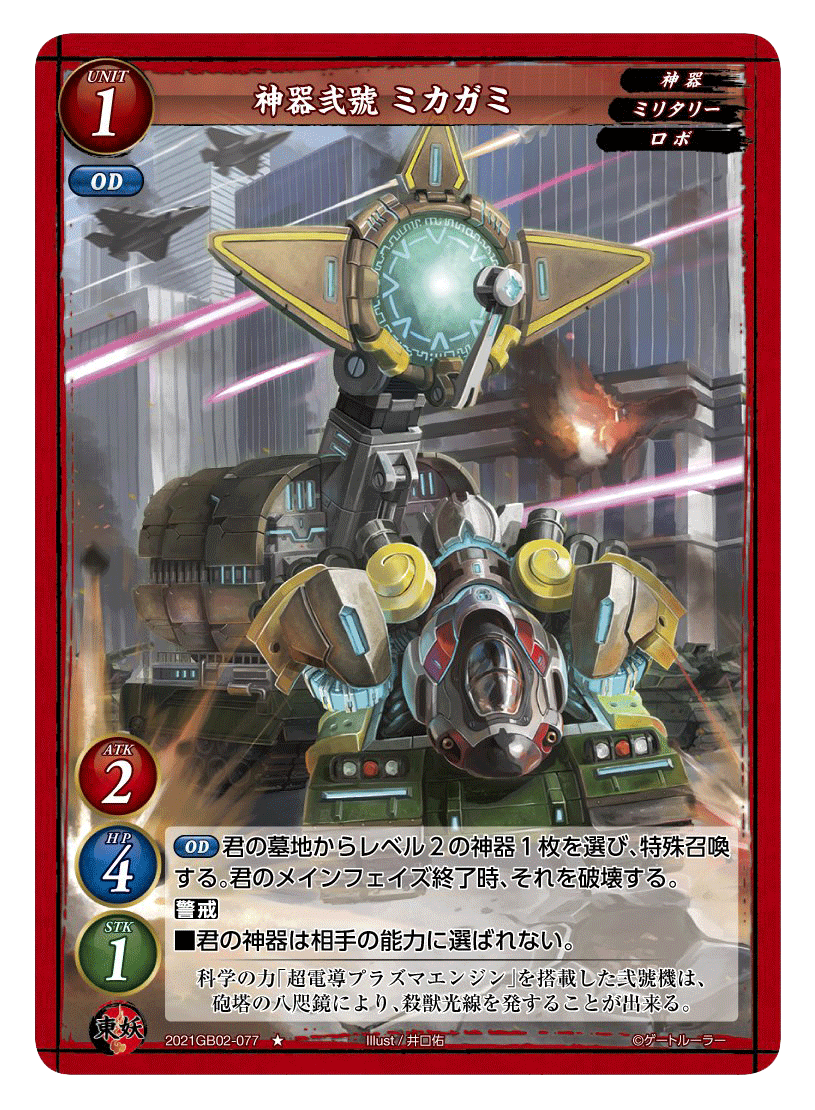 Sacred Treasure #2, Mikagami
Card Number: 2021GB02-077 ★
Faction: Yomajin Front
Card Type: Unit
Level: 1
Attribute(s): Sacred Treasure, Military, Robo
ATK: 2
HP: 4
STK: 1
Effect: [OD] Choose 1 level 2 Sacred Treasure from your graveyard and special summon it. Destroy it at the end of your main phase.
[Defender]
■ Your Sacred Treasure cannot be chosen by your opponent's card effects.
Flavor Text: The 2nd machine is equipped with the power of science, the "superconducting plasma engine", and can emit a beast killing ray with the Yata no Kagami on its turret. 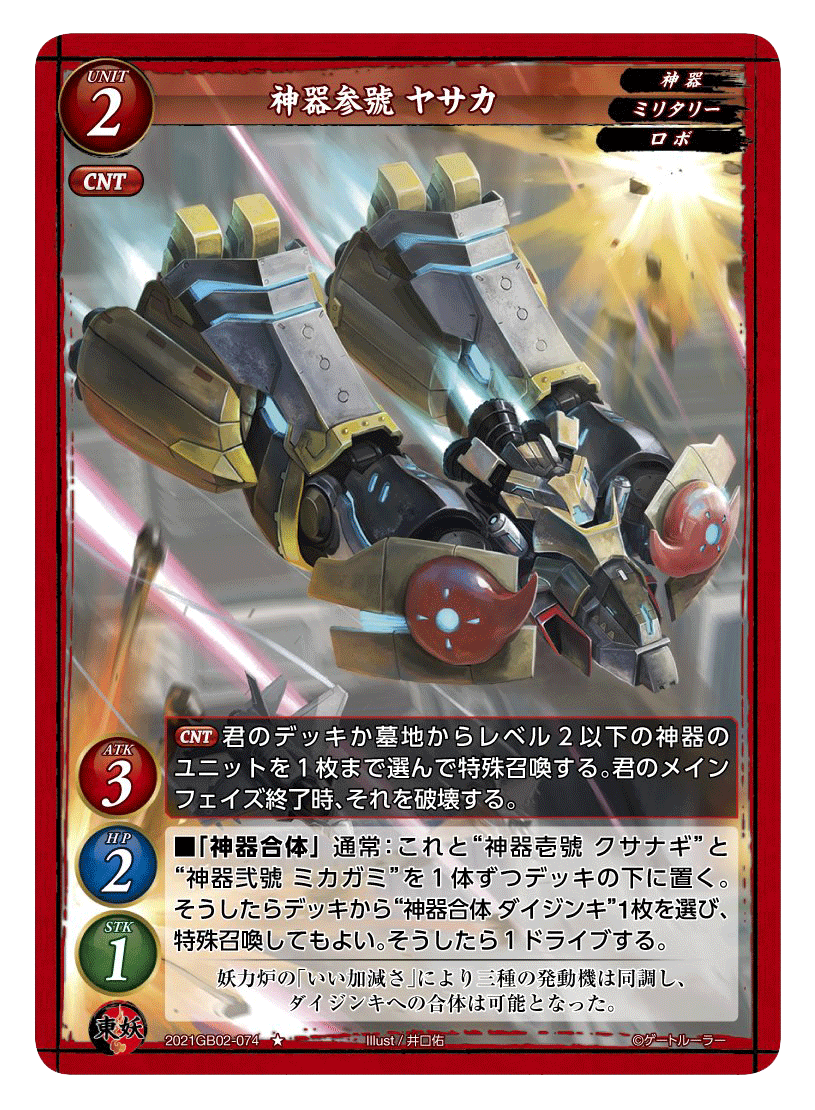 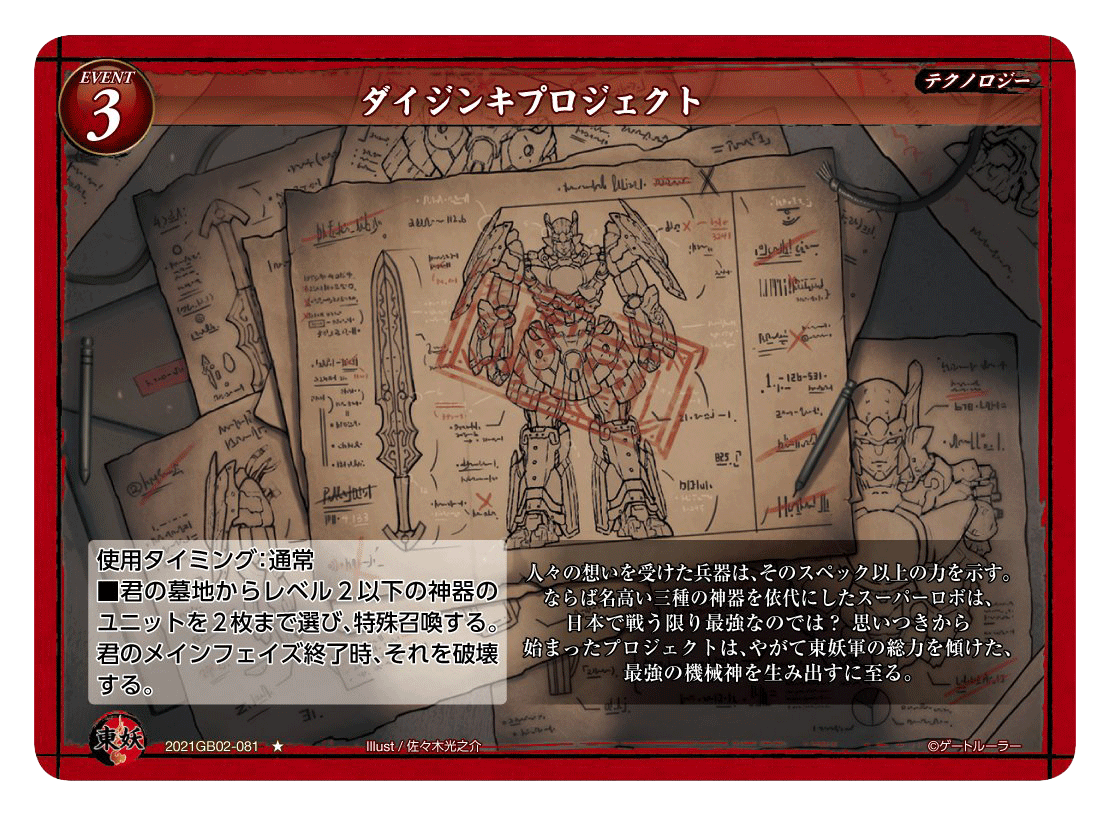 Daijinki Project
Card Number: 2021GB02-081 ★
Faction: Yomajin Front
Card Type: Event
Level: 3
Attribute(s): Technology
Effect: Use Timing: Normal
■ Choose up to 2 level 2 or lower Sacred Treasure units from your graveyard, and special summon them. Destroy them at the end of your main phase.
Flavor Text: The weapons that receive the people's thoughts and feelings show power beyond their specifications. If that's the case, then a super robot that uses the famous three sacred weapons as its power course will be the most powerful weapon, as long as its fighting in Japan. The project that began from this idea would eventually lead to the creation of the most powerful machine god that used the full power of the Yomajin Front.

A new combining robot for Yomajin Front! Very similar in nature to "Masurao" from Set 1, with many advantages of its own, but some unique disadvantages as well.

The most neutral comparison would be the Levels required. Like Masurao, its pretty locked into a Drive based ruler, so how much space in your Level limit it takes up is important. Despite taking more pieces, the total Level is only 4 more than Masurao, when you run max copies (ignoring Daijinki itself, of course, since it takes 0 Level no matter how many you run). Also in deck limits, Daijinki puts much less strain on your CNT slots, with only 1 of the 5 cards being a CNT.

While it requires more pieces overall, Daijinki's support is flooded with consistency boosters that makes it seem like it may end up easier to assemble overall, compared to Masurao. Every one of the pieces gets an effect that helps boost consistency. Kusanagi grabs from the top of your deck (which has an about 50% success rate), Mikagami can grab either of the other two pieces from the grave, and Yasaka's CNT lets you pull another piece out of your deck, which can either survive to your main phase and help you combine, or act as a meatshield while setting up your graveyard for Mikagami or the very powerful support event "Daijinki Project". Yasaka in particular provides incredible set up for the deck, as damaging it once will get itself and another piece in your grave for easy access later with the revival effects.

Once you assemble the pieces, Daijinki is also easier to pull off. Mikagami's effect to protect the Sacred Treasures from being chosen by effects protects your pieces from all Immediate speed removal in the game, so once he's out, you don't have to worry at all about a "ZAPZAPZAP!" screwing up your combo.

And then there's Daijinki himself. While it doesn't get the double Charge Shield that Masurao does, Daijinki is instead completely immune to effects, able to put itself in the defensive zone with Defender, and gets twice the damage output. The biggest flaw is that it doesn't have any built in protection from attacks, like Masurao does, so if you don't have other cards to support it, Daijinki will likely go down pretty quickly. But on the other hand, combat tricks are one of Yomajin's specialties, and when you pull off the combination you'll even get an extra drive, which can help you ensure at least 1 set to help protect Daijinki, if you didn't get one up before getting it up.

The pieces synergize pretty well with this strategy too, between Yasaka's CNT letting you drop a piece in your defensive zone, as well as Mikagami's combination of Defender, 4 HP, and immunity to targeting making it a fairly tricky to deal with unit that will likely have to be attacked into.

Masurao has plenty of its own tricks, primarily its ability to loop CNTs, but Daijinki has a very coherent and consistent focus of its own that synergizes well with Yomajin's strengths.
Edited by HunterSerge on 18th February, 2021 at 4:46pm CST