Posted on 19th February, 2021 at 1:27pm CST
Today's new card reveal is a powerful field nuke that provides the first incentive to build around Pepoverse, one of Wonderverse's attributes! This one is an influencer reveal, coming to us from twitter user, "Guu". 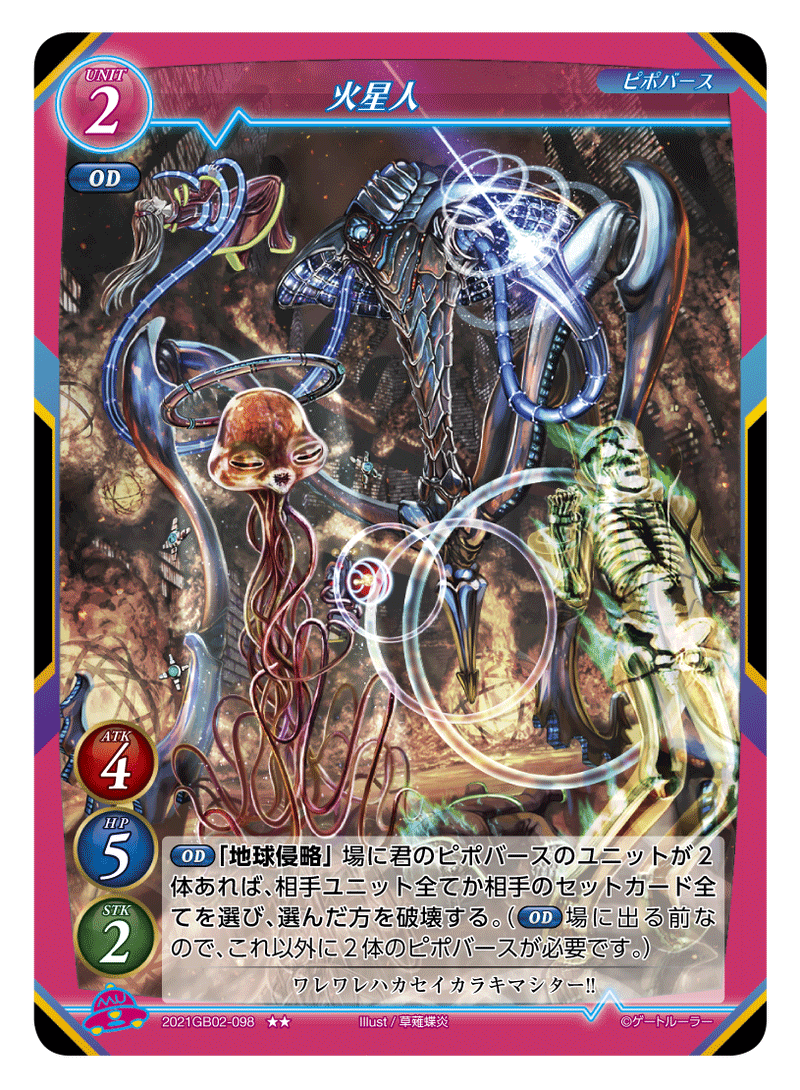 The Martians
Card Number: 2021GB02-098 ★★
Faction: Wonderverse
Card Type: Unit
Level: 2
Attribute(s): Pepoverse
ATK: 4
HP: 5
STK: 2
Effect: [OD] "Invading the Earth" If you have two Pepoverse units, choose either all of your opponent's units or all of your opponent's set cards, and destroy the ones you chose. (Because [OD] is used before this enters the field, you need 2 Pepoverse units other than this.)
Flavor Text: We came from Mars!!

A very powerful field nuke effect, but also pretty tough to pull off! Resolving this will definitely require running a lot of Pepoverse units, since even with a Pepoverse unit already on the field, you need to Drive this alongside another Pepoverse unit. In addition, since it does need a heavy Pepoverse count to get off, it'll be pretty telegraphed that you're building around it, so smart opponents are likely to start prioritizing clearing your field to prevent this from resolving.

A good way to counteract that is Events that would let you play a Pepoverse unit, like "Schrodinger's Cat", "Thousand-year Cherry Tree", and "Capture Beam". Set cards are harder to clear than units on your field, and having one of these set, and then driving into "The Martians" plus any other Pepoverse would allow you to resolve "Invading the Earth" even if you had no units going into the turn.

Lastly, earlier Pepoverse reveals from this set, like "Flying Spaghetti Monster" and "Darumageddon" will also be great for helping this goes off. FSM will come out in the middle of a battle phase and will likely not be cleared the turn its played, while simultaneously fitting into the set strategy mentioned earlier, granting it synergy with cards used to support that, like "Space Journalist, Christel" and cards like her. While "Darumageddon" is just an all around fantastic card for Drive-based decks that gives Pepoverse decks extra cards to help pull off this field nuke, while being a Pepoverse himself.
Edited by HunterSerge on 19th February, 2021 at 1:37pm CST