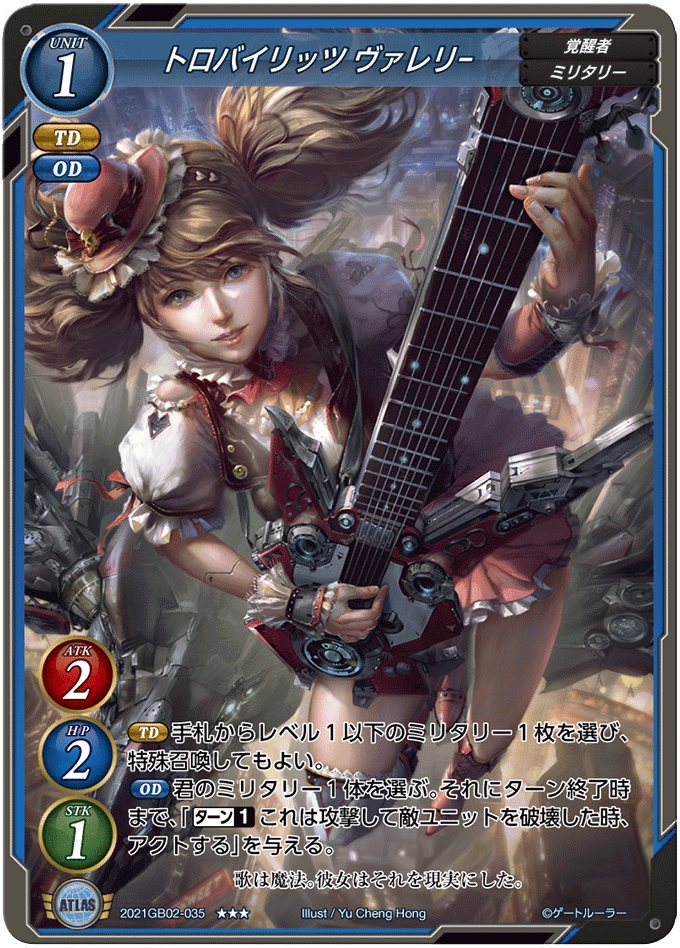 Trobairitz Valerie
Card Number: 2021GB02-035 ★★★
Faction: ATLAS
Card Type: Unit
Level: 1
Attribute(s): Awakened Being, Military
ATK: 2
HP: 2
STK: 1
Effect: [TD] You may choose 1 level 1 or lower Military from your hand, and special summon it.
[OD] Choose 1 of your Military. It gets "[1/turn] When this unit attacks and destroys an enemy unit, activate this card" until end of turn.
Flavor Text: Songs are magic. She made it into reality.

A versatile Military card that gets different applications depending on your Ruler of choice!

With Hand-based Rulers like Knight and Wizard she will allow you to flood your board with more Level 1 units cheaply and easily, similarly to "Medal of Honor". Good targets include Turret Turtle and Tank Type-100 for STK 2 and beefy HP 4, Young Security Officer to generate card advantage, and Allied Troop for a difficult to deal with defensive zone unit.

For Drive-based Rulers, you get an aggressive effect that allows any of your Military units to attack again after clearing an enemy unit off the board. Its best applications are of course with "When this attacks" effects like Honoikazuchi, Victor, and Naruikazuchi, since it lets you double dip, but being a [OD] effect its a bit dependent on luck to set up that scenario. 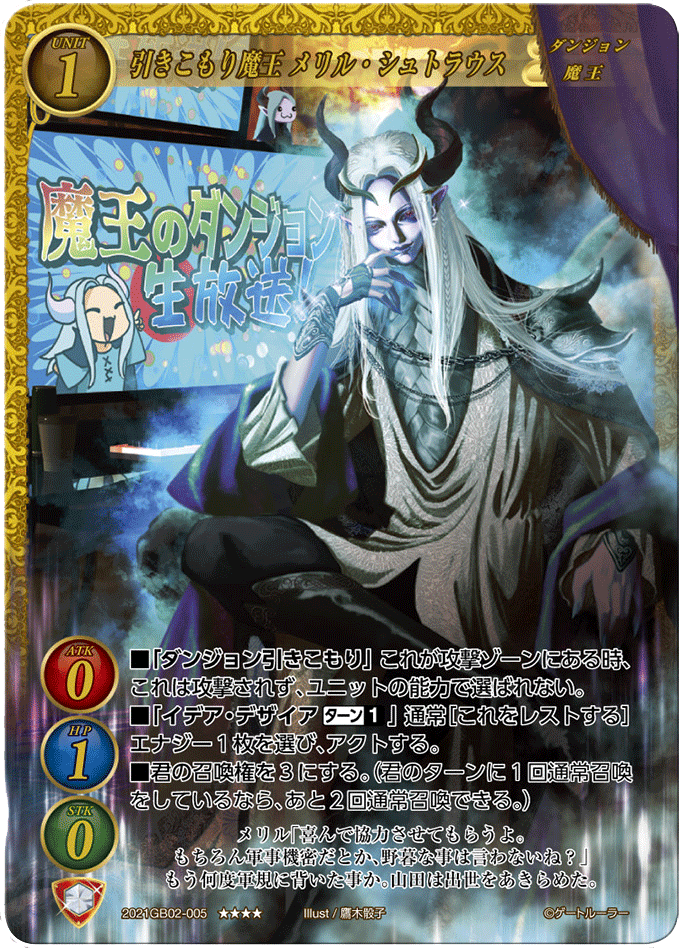 Socially Withdrawn Demon Lord, Merrill Strauss
Card Number: 2021GB02-005 ★★★★
Faction: Volnar
Card Type: Unit
Level: 1
Attribute(s): Dungeon, Demon Lord
ATK: 0
HP: 1
STK: 0
Effect: ■ "Withdraw to the Dungeon" While this card in an attacking zone, it cannot be attacked or chosen by units' abilities.
■ "Idea Desire [1/turn]" Normal [Rest this card] Choose one of your Energy and activate it.
■ Your Summon Cap becomes 3.
Flavor Text: Merrill "I'd be happy to help. Of course, I won't say anything about your military secrets either."
He'd already lost count of how many times he'd broken military regulations. Yamada had already given up on advancing his career.

The Demon Lord previously mentioned in Chimerala's flavor text appears! Given Merrill's placement in the lore, the Dungeon attribute will likely be built around him. Also on the subject of lore, it seems Merrill's dungeon is involved with the Shiori and Yamada storyline, which thus far has been the primary plot line taking place in Volnar.

Merrill himself is a pretty generically useful card. By taking up one of your attacking zones, he's able to passively increase your Summon Cap and provide you with extra Energy every turn. In addition, he has decent protection from removal, being unattackable as well as being immune to targeting by unit effects. Of course, the big pieces of removal like ZAPZAPZAP! will be able to clear him no problem, and particularly a spread effect like ZAPZAPZAP! will be able to clear him while also dealing with other cards. Additional support in protection events like "I didn't even feel that!" will likely be important to getting the most out of this card.

He seems like he'd be best in a set-up based deck that doesn't have a big problem with giving up one of your attacking zones early on, like Darkness. A deck trying to make use of Power Ray Maximum would also like this card quite a bit for allowing it to use a bit of Energy while keeping its big play available.

As an example of how to use Valerie's [OD] effect, if you were to give it to Victor, you can attack the enemy Ruler with Victor, use Victor's effect to destroy a unit on the sides, activate Victor, and attack the Ruler again!

That is possible! (Only once per turn)

What that means is that for the condition of "When this unit attacks and destroys an enemy unit", it is considered fulfilled even if the unit is destroyed by an "When this attacks" effect of the unit. 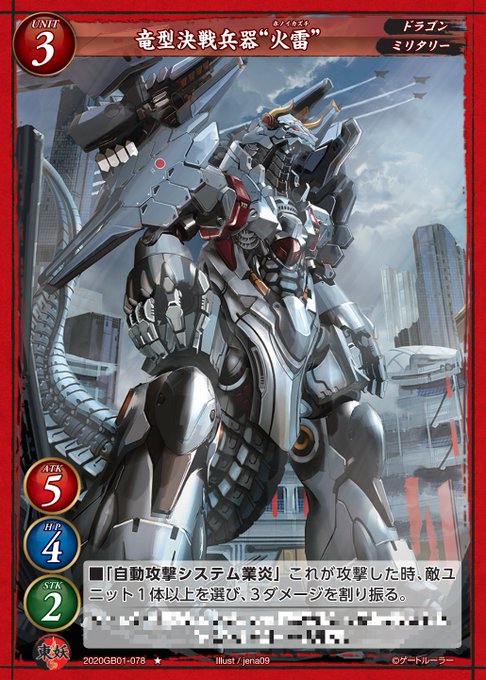 Dragon-type Battle Weapon "Honoikazuchi" was an ace card during Gate Ruler's demo deck format. Its a card that has become obsolete since its release, but its still cool and I like it!

I'd like to make direct support cards for old popular cards like this from time to time to reward them!

For today's last reveal, we have an influencer reveal from Youtuber "Suzuki Suhada". 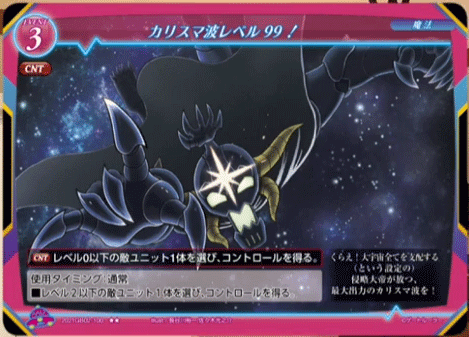