Posted on 14th March, 2021 at 12:12pm CST
Today we have a new influencer reveal! In addition, since we'd fallen behind a bit, we'll also be doing some catch up after today's reveal.

This influencer reveal comes to us from the Youtuber "Yannishi's Daily Life Channel", who is also one of the winners of the Gate Ruler Music Grand Prix.

Geldes Grahm (Everything is futile before the power of darkness) 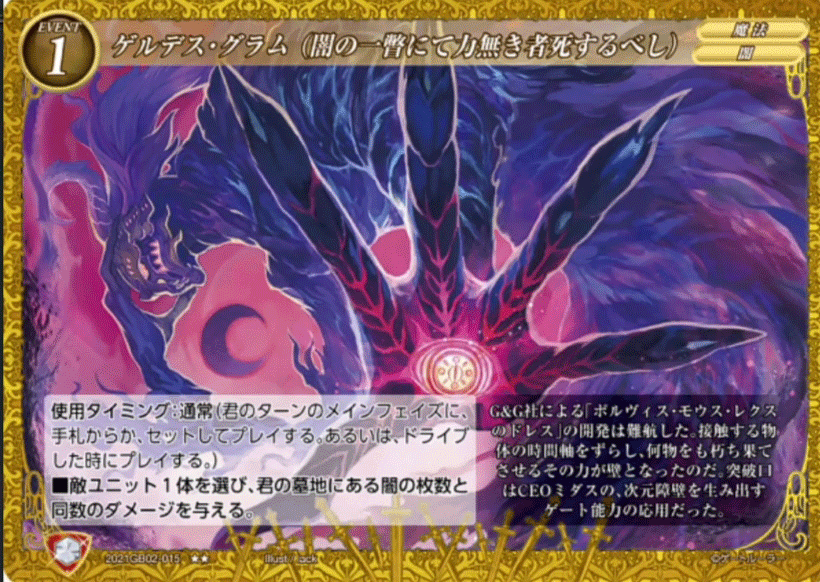 Card Number: 2021GB02-015 ★★
Faction: Volnar
Card Type: Event
Level: 1
Attribute(s): Magic, Darkness
Effect: Use Timing: Normal
■ Choose 1 enemy unit, and deal damage to it equal to the number of Darkness cards in your graveyard.
Flavor Text: Guns & Gold's development of "Vastorus Rex's dress" was a difficult task. The power to shift the time axis of anything he touched and cause it to decay into dust had become a wall. The breakthrough that finally crossed that wall was applying CEO Midas's abilities as a Gate Ruler to create gates to act as dimensional barriers.

First thing's first, being a Darkness event is incredibly valuable. Previous Events that support Darkness have avoided having this attribute, which has reduced how much of your deck is Darkness, not just preventing you from filling the graveyard by simply playing Events, but also reducing the consistency of mill effects. So even with a mediocre effect, the mere presence of that attribute would have made the card notable.

But on top of that, its also an incredibly powerful card. Even at Normal speed, the removal heights it can reach is far beyond what you can typically get for the cost, with typically seeing 4 damage on Level 2s and 6 damage (or hard removal) on Level 3s. Its low cost makes it pretty easy to do a play of using this to remove something and then playing an Abyssal Summoner to bring out one of your Abyssal Concerto boss cards. Especially notable is this gives the deck yet another out to Malevolus Prime. Already in this set its received 2 powerful Abyssal Summoners with enough HP to more easily survive against Malevolus, and now this Event allows you to remove Malevolus before playing a Summoner, a play which requires the same 5 Darkness in graveyard that your big Abyssal Concerto units will require.

Lastly, it seems likely that Darkness will have many different ways of viably building it in this set. Its powerful 2 Abyssal Summoners (Dark Mother, who is featured later in this article, and Voltona), while both very good, do not work well together, so will likely be used in different builds. And beyond that, with this card, Final End's primary function working when played normally, and potentially more similar cards like "Black Knight, Zahar" who is known to be in this set, there could be a Darkness build that focuses less on actually Abyssal Summoning, and more on building up cards in the graveyard and benefitting from them.

All in all, its a fantastic card that perfectly fits Darkness's control oriented style of play.

With that said, on to the catch up of previous reveals!

The March 1st reveal is an influencer reveal from Youtuber "Aibo Academy". 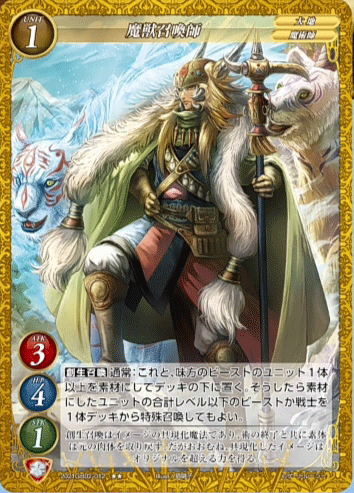 The Legendary Beast Summoning Master
Card Number: 2021GB02-012 ★★
Faction: Volnar
Card Type: Unit
Level: 1
Attribute(s): Earth, Wizard
ATK: 3
HP: 4
STK: 1
Effect: [Genesis Summoning] Normal: Use this & 1 or more ally Beast units as material and put them to the bottom of your deck, and special summon 1 Beast or Warrior unit from your deck whose Level is equal or lower than the total Level of the materials.
Flavor Text: Genesis Summoning is a magic technique where the summoner's body embodies the image of the target, and when the magic ends, the body returns to its original state. In general, the embodied image is more powerful than the original body.

The influencer reveal on March 4th came from the Vtuber "Romi Hoshino & Fuwakuma". It was posted in an article on their Fanbox, which appears to be a service similar to Patreon. 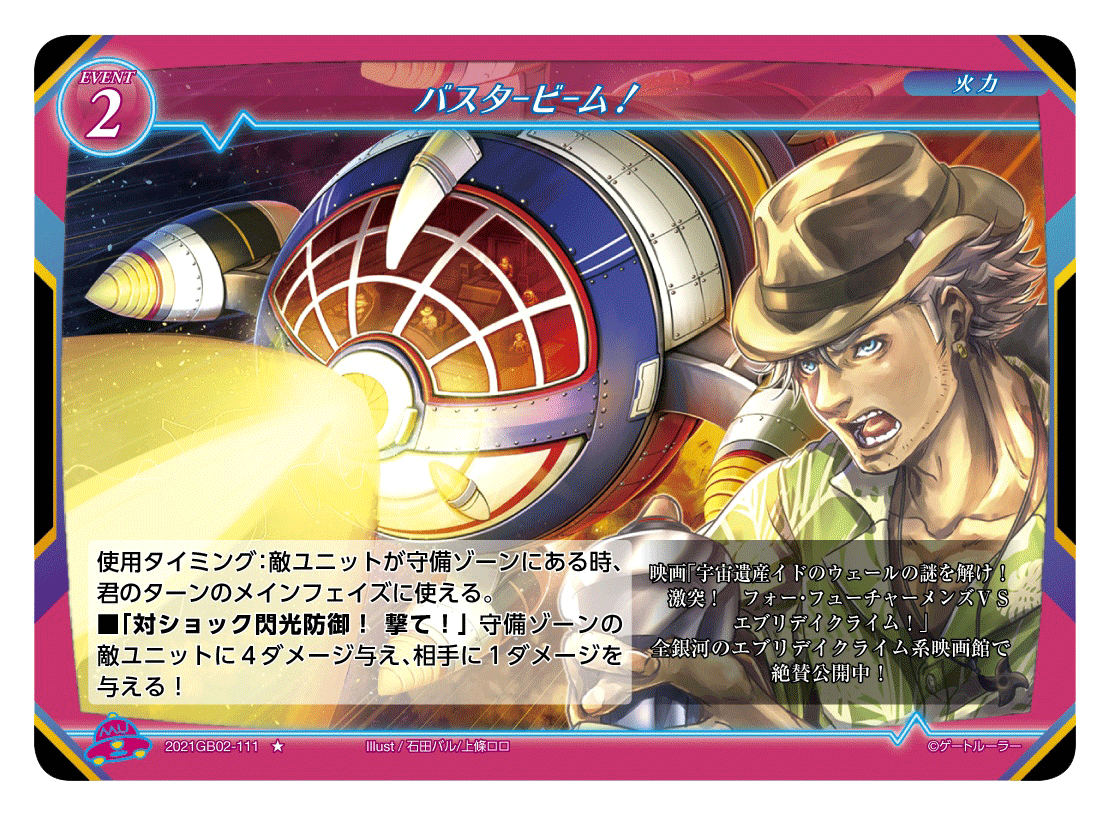 Buster Beam!
Card Number: 2021GB02-111 ★
Faction: Wonderverse
Card Type: Event
Level: 2
Attribute(s): Firepower
Effect: Use Timing: You may play this during your main phase, if there is an enemy unit in a defensive zone.
■ "Anti-Shock Defensive Flash! Fire!" Deal 4 damage to an enemy unit in a defensive zone, and deal 1 damage to your opponent!
Flavor Text: The movie "Solve the mystery of the Galaxy Heritage, Well of Id! Clash! Four Futuremen vs Crimenauts!" is now open to the public at every Crimenauts movie theater across all galaxies!

March 5's influencer reveal comes to us from the VTuber "Bisyamonten Soiya". 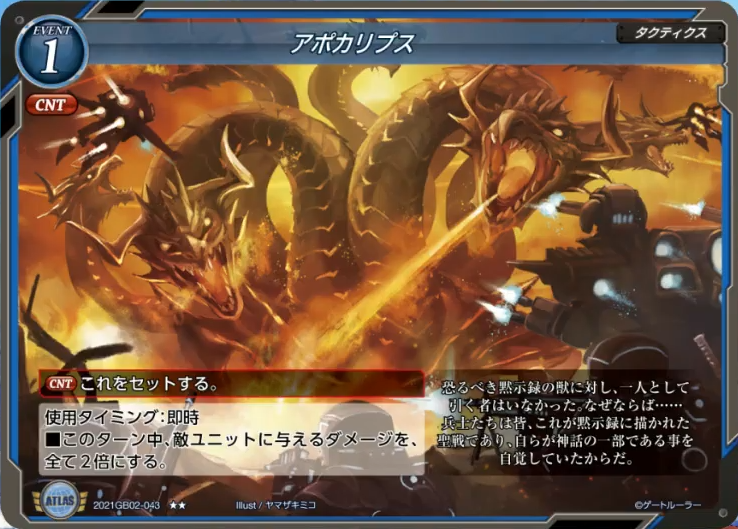 Apocalypse
Card Number: 2021GB02-043 ★★
Faction: ATLAS
Card Type: Event
Level: 1
Attribute(s): Tactics
Effect: [CNT] Set this.
---
Use Timing: Immediate
■ During this turn, all damage dealt to enemy units is doubled.
Flavor Text: When fighting against the terrifying Beast of the End, no one was a human being. Because all the chiefs knew that this was the holy war depicted in legends of the apocalypse and that they were becoming a part of the myth. 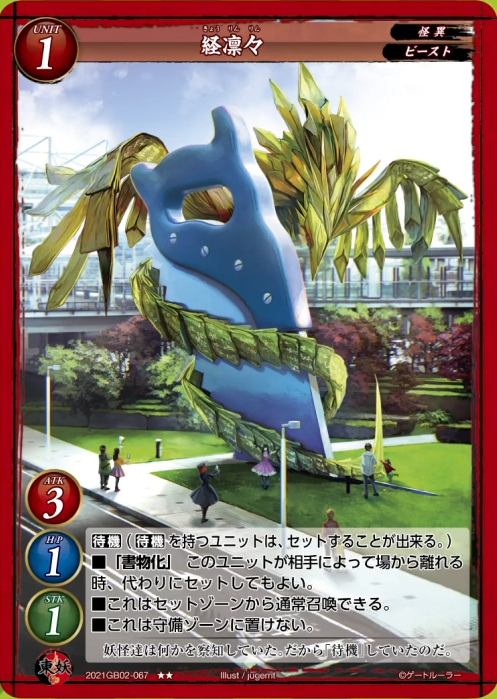 Kyourinrin
Card Number: 2021GB02-067 ★★
Faction: Yomajin Front
Card Type: Unit
Level: 1
Attribute(s): Apparition, Beast
ATK: 3
HP: 1
STK: 1
Effect: [Standby] (A unit with [Standby] can be set into set zones.)
■ "Documentation" When this unit would leave the field by an opponent, you may set it instead.
■ This can be normal summoned from the set zone.
■ This cannot be put in a defensive zone.
Flavor Text: The youkai are aware of something. That's why I've been "waiting".

Translator's Note: The kanji used for "waiting" in this flavor text is the same as the Standby keyword. They've been translated differently to better fit their contexts, but since this seems like a deliberate reference, I wanted to point this out.

Next, on March 7th, is an influencer reveal from Youtuber "NOBOSAN". 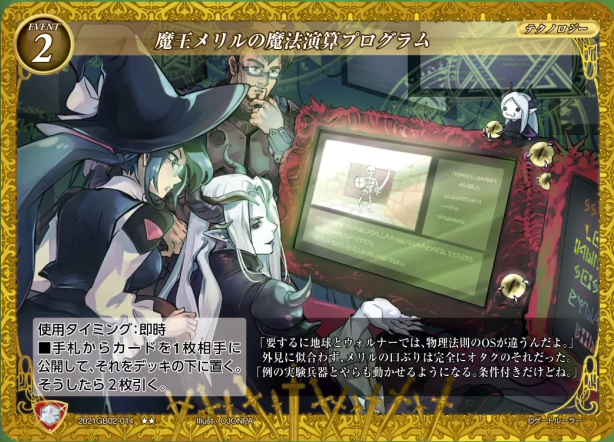 Demon Lord Merrill's Magical Calculation Program
Card Number: 2021GB02-014 ★★
Faction: Volnar
Card Type: Event
Level: 2
Attribute(s): Technology
Effect: Use Timing: Immediate
■ Reveal 1 card from your hand to your opponent, and send it to the bottom of your deck. If you do, draw 2 cards.
Flavor Text: "In short, Earth and Volnar's laws of physics work on a completely different OS from each other." Contrary to his appearance, Merrill's tone was that of a complete nerd. "You'll be able to operate the experimental weapon, but only in the right conditions."

On March 8th we had an official reveal on twitter. 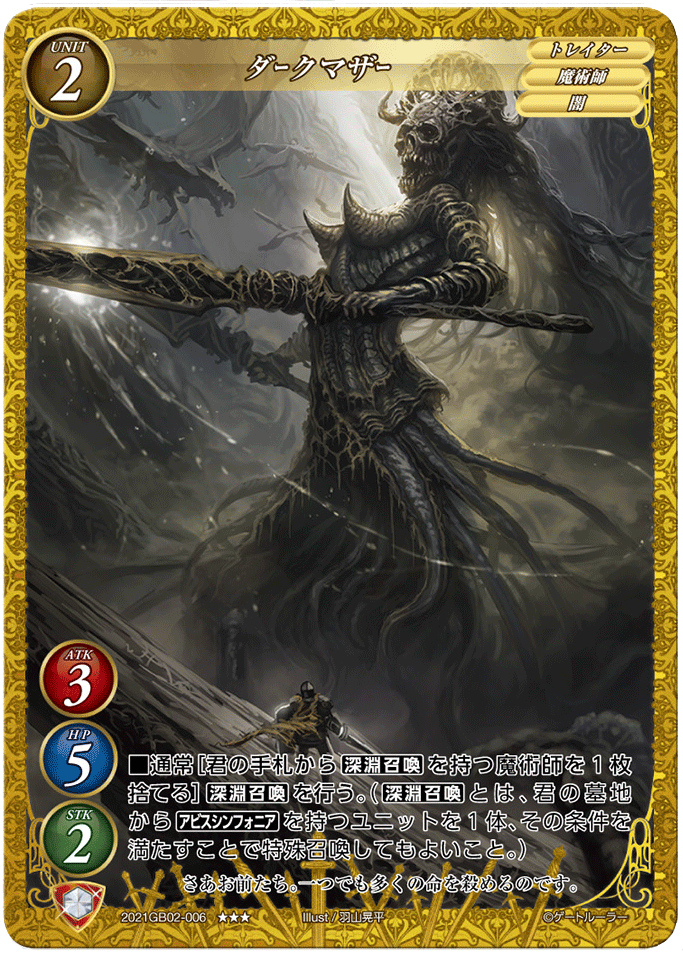 March 9th's reveal is another from an influencer, the Vtuber "Kuroneko". 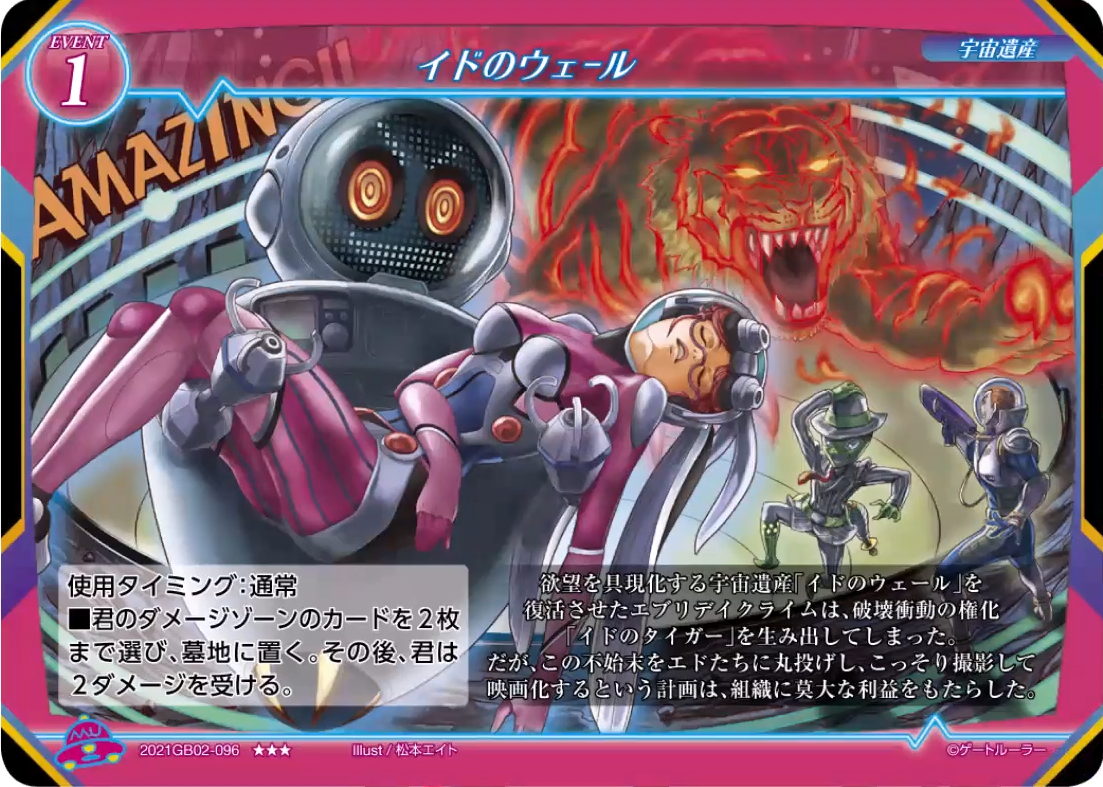 Well of Id
Card Number: 2021GB02-096 ★★
Faction: Wonderverse
Card Type: Event
Level: 1
Attribute(s): Galaxy Heritage
Effect: Use Timing: Normal
■ Choose up to 2 cards in your damage zone, and send them to your graveyard. Then, deal 2 damage to yourself.
Flavor Text: The Crimenauts, who reactivated the Well of Id, a Galaxy Heritage that creates embodiments of desire, have created the Tiger of Id, an embodiment of destructive impulses. However, their real plan - to send this disaster at Ed and his comrades, secretly film it, and make it into a movie - brought in huge profits for the organization.

And for our final reveal of this catch-up, we have the influencer reveal from March 10th, revealed by Youtuber "Gate Ruler S". 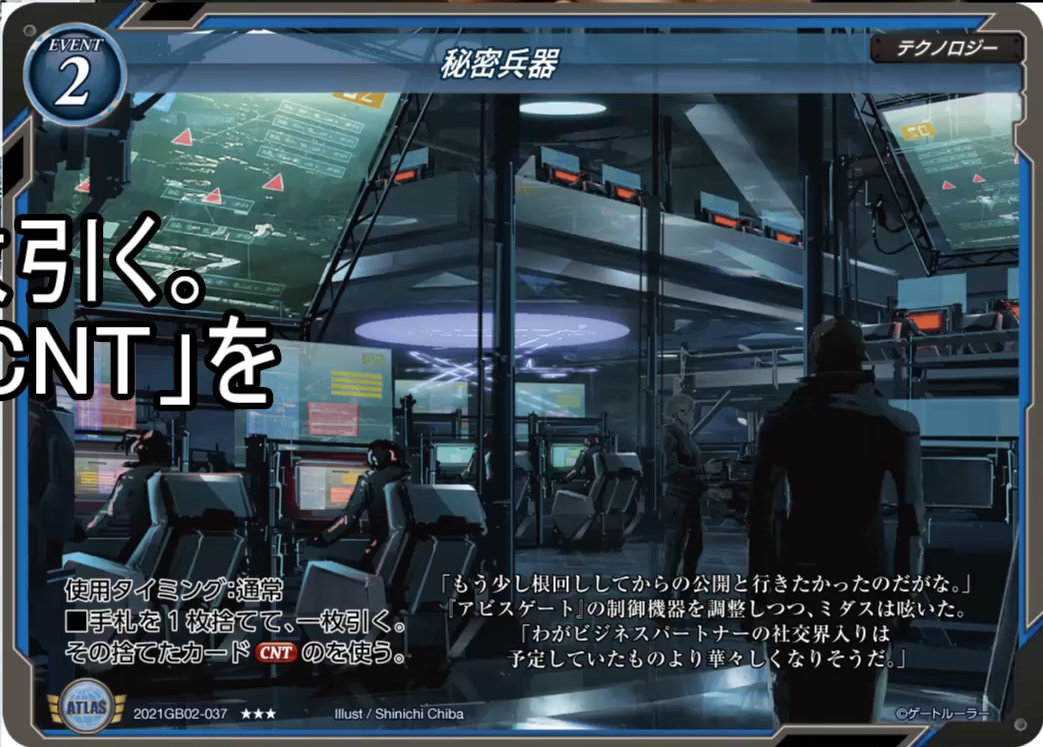 The Secret Weapon
Card Number: 2021GB02-037 ★★
Faction: ATLAS
Card Type: Event
Level: 2
Attribute(s): Technology
Effect: Use Timing: Normal
■ Discard 1 card from your hand, and draw 1 card. Use the discarded card's [CNT].
Flavor Text: "I wanted to lay down some more groundwork before going public." Midas said, while adjusting the control equipment of the Abyss Gate. "But it looks like my business partner's entry into soceity is going to be a bit more spectacular than planned."