Posted on 25th June, 2021 at 6:26am CST
NOTE: Click on the card images in this article to display a pop-up with the card's basic translated information. 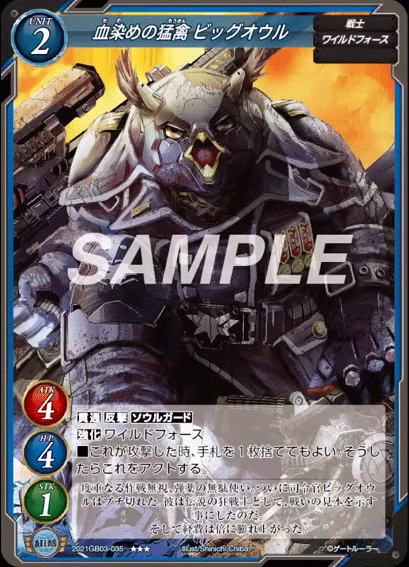 In today's official Gate Ruler livestream on the Japanese Youtube channel, 2 new cards from Set 3 were revealed, both from ATLAS! The two revealed cards are Blood-stained Bird of Prey, "Bigwig" Owl & the previously teased event card Rage of the Ascendants. The rest of the livestream was spent showing off the upcoming Deckbuilder functionality for the Japanese website.

The next livestream will take place on July 9th.

or "When this enters play" ability which make for excellent Enhance fodder, with particular note going to the level 0 Specialist "Bullseye" Wolf.

Lastly, the new version of "Bigwig" Owl comes with the ability to ready itself after an attack as many times as you want, as long as you have a card in your hand to discard. This synergizes quite well with his set 1 version Colonel "Bigwig" Owl's draw based effects. Of course, since Owl only has 1 STK, this effect isn't typically going to be useful for aggressive damage, though it could help you clinch a game when your opponent is on their last leg, but this ability's primary usage will likely be for field clearing. 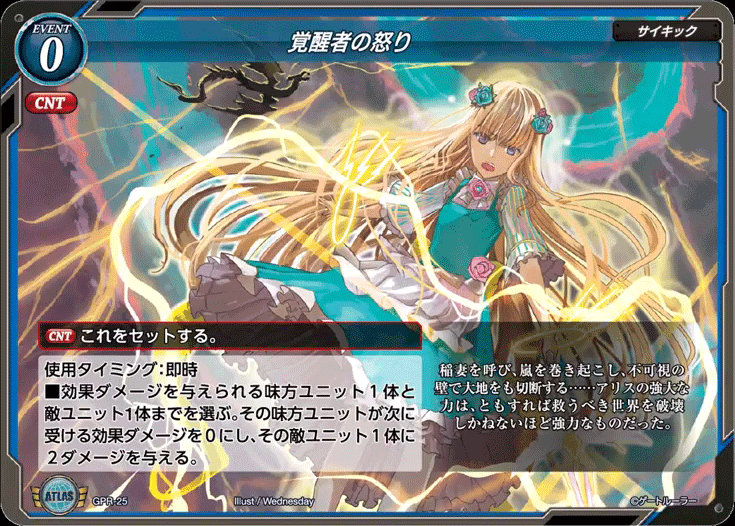 Today's other new reveal is a new Alice-featuring Event card, Rage of the Ascendants. Its another preview promo for Set 3 that will be distributed in Japan, but of course will still be available normally in Set 3. The card is essentially another version of Suppressive Fire, with an added effect damage protection effect as well as the ability to set itself when damage checked. However, that additional effect is both a benefit and a drawback, as you will only be able to activate this card when there's incoming effect damage.

In exchange for that rather significant timing restriction, it gets the very good "Set this" CNT effect. For a level 0 like this, this is much more useful than the "Play this", as it lets you retain complete control over when the card is used, though for this specific case it also means that there's no way to bypass its timing restriction.

A card that will synergize strongly with it is Draconoid Dreadnaught "Aramisaki", as its ability to convert set cards into 4 points of effect damage will prevent its restriction from making it dead weight against builds with no effect damage.
Edited by HunterSerge on 25th June, 2021 at 6:44am CST