Posted on 13th October, 2021 at 6:24pm CST
Card images in this article can be clicked for a pop-up with expanded details, including its translated effect for cards not yet released in English. 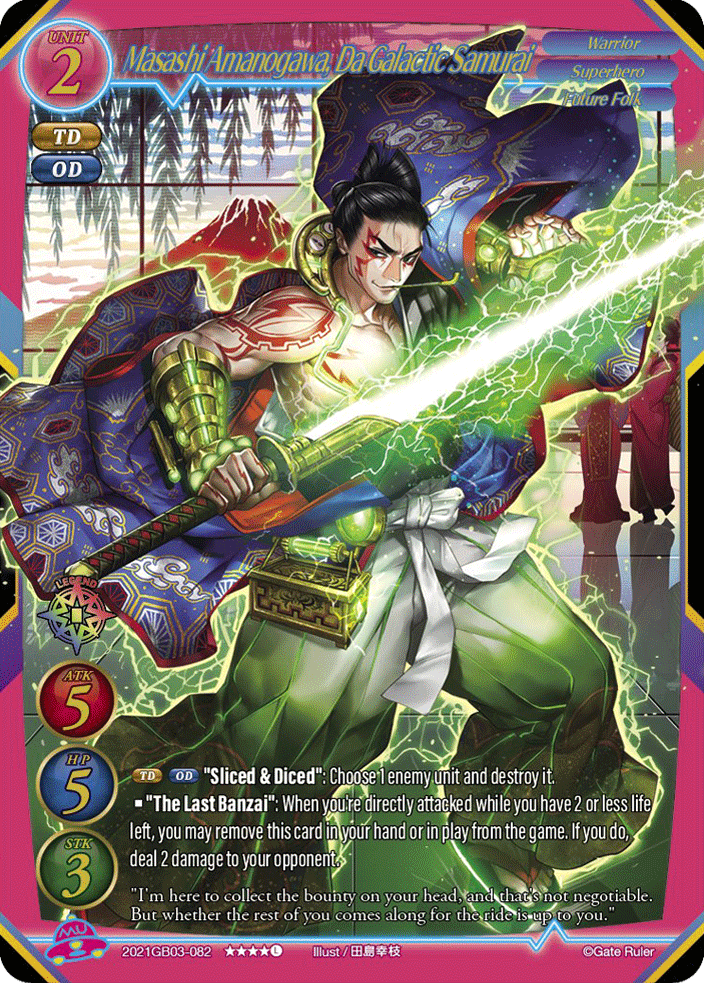 The Japanese daily twitter reveal for October 13th is the previously revealed, Exo-Armor Trooper "Yuhi", which we discussed in more detail in this previous article.

Masashi Amanogawa, Da Galactic Samurai is extremely comparable to GB01's Captain OMG!, with an identical statline of 5/5/3 and the same hard removal

ability, all at level 2 instead of level 3. However, it does lose

, which is one of the best qualities of Captain OMG!. Sometimes you may just want to bring in a Legend without eating a

slot, so its easy to see the two co-existing.

Musashi has a couple purely unique upsides, namely its free ability in the lategame to burn your opponent for 2, which is very strong (for comparison, its the entirety of the Level 4 Space Ifrit's effect in Drive rulers), and is sure to make this card valuable for burn strategies. In addition, it has the Future Folk attribute, and given its main value is expended from being played, it can be a good target for Future Folk Enhances like The Futuristic Four and Space Rider, Space Dullahan.

And beyond the direct comparisons, it also opens up the option for Red/Pink builds to have both Legends be hard removal, or to have access to this kind of Legend in decks carrying Wonderverse but not Yomajin Front. The latter application is particularly nice for Hand Rulers, as Wonderverse has previously been very lacking in Legends that are useful to those rulers.
Edited by HunterSerge on 13th October, 2021 at 6:27pm CST