Posted on 7th November, 2020 at 12:55pm CST
A correction on yesterday's article. We said that [CNT] effects would work resolve their effect before going into the damage zone. We weren't entirely sure whether it was that or the [CNT] effects not going to damage at all, so we went with the safer option to avoid the possibility of creating a panic in the English community.

Thanks to the help of discord member Inanaku Muu (Check out their Youtube here!) we have confirmed what specifically was said. [CNT] effects do in fact go to the cemetery when they would be damaged, regardless of whether their [CNT] effect can be resolved, the important other detail is that [CNT] cards have a per deck limit determined by your Ruler, similar to Vanguard's trigger limit.

This takes cards like Absolute Barrier, which has the [CNT] effect of "Put this into the cemetery", from seeming to be a very powerful [CNT] effect to being among the weakest, only doing what any [CNT] card does by default while also counting towards your [CNT] limit.

Also important to note that every single Event card we've seen so far has had a [CNT] effect. We don't know yet if this will apply across the board, but it certainly is common enough that Events that don't have any [CNT] effect would be a rare occurence, and also quite good due to not counting towards your [CNT] limit. 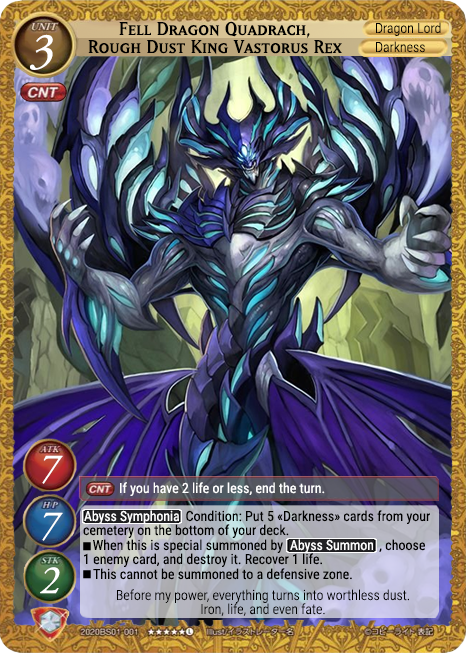 Also of note is Vastorus Rex. On one hand, it now counts towards your [CNT] limit. However what it gains from this is far more. This [CNT] effect is now much more powerful, as in addition to the turn ending effect being able to function as a much more potent "miracle heal", plus setting itself up in the cemetery for Abyss Summon. For that reason, any future Darkness reveals with any [CNT] effect are worth keeping an eye on.

Eye Spy, Force of Will's publisher, is even stated to be Gate Ruler's English distributor, so any concerns of Gate Ruler being sued by Force of Will are unnecessary.
Edited by HunterSerge on 7th November, 2020 at 12:55pm CST