Posted on 25th February, 2021 at 6:46am CST
Catching up on yesterday's reveal, we have a new Yomajin Front evemt. 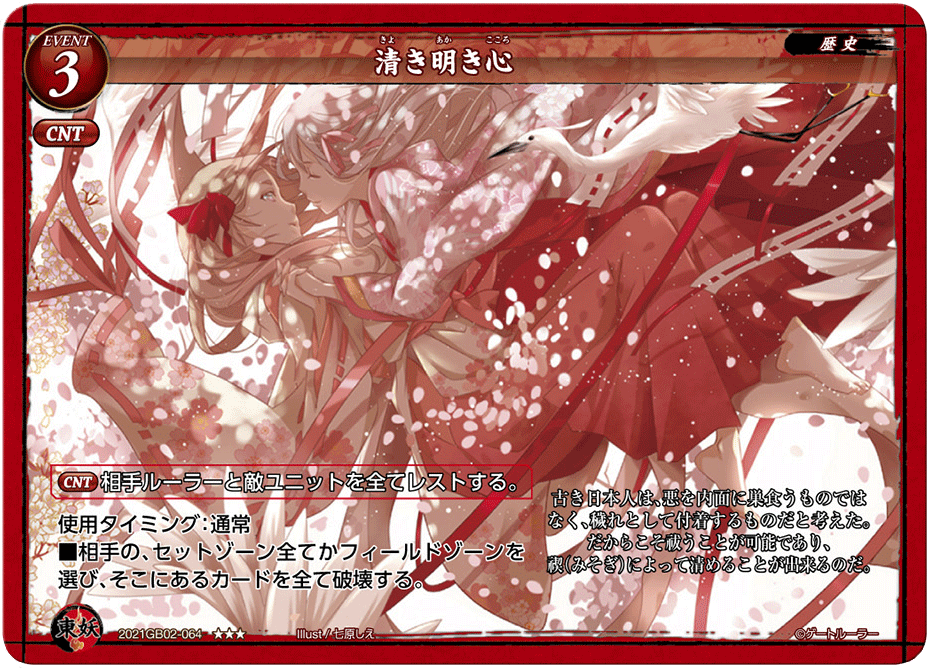 Innocent Heart
Card Number: 2021GB02-064 ★★★
Faction: Yomajin Front
Card Type: Event
Level: 3
Attribute(s): History
Effect: [CNT] Rest your opponent's ruler and all enemy units.
---
Use Timing: Normal
■ Choose all of your opponent's set zones or your opponent's field zone, and destroy all cards in the chosen zones.
Flavor Text: The old Japanese thought that evil was not something born from the flesh, but something that latches onto the body through opportunity. That is why it can be broken, just like the night.

Innocent Heart shares the powerful CNT of yesterday's Power Ray Maximum, which gives the card plenty of value on itself. If you really want to make your opponents hate you, you could even run both.

Innocent Heart's main effect is also very useful. A backrow wipe (even if you have to choose between field cards and set cards), while made somewhat situational by the very high cost, is very useful and could turn around the match-up against decks focused on combat tricks, or field reliant archetypes like the new Emissary of Ruin.

Midas's Secretary, Haze
Card Number: 2020GB01-046 ★
Faction: ATLAS
Card Type: Unit
Level: 1
Attribute(s): OWL, Darkness
ATK: 2
HP: 5
STK: 1
Effect: ■ "Data Falsification" When you would use a Darkness unit in your graveyard as material for [Abyssal Concerto], you may treat it as any level from 0 to 3.
Flavor Text: "Sir Midas's charity to the oppressed is now hypocrisy. What troubles him the most is that not all people are given equal opportunities, and that its stupidity to take take advantage of your opportunities."

The effect of "Midas's Secretary, Haze" is revealed.

A card that may become essential depending on the Abyssal Concerto conditions released in the future, is a Darkness card itself, and has excellent stats.

Haze doesn't seem particularly useful right now, with only Viola to work with, but is a card to keep an eye on when we get more Level-based [Abyssal Concerto] conditions in the future. Her 5 HP is also very notable for a low level card. 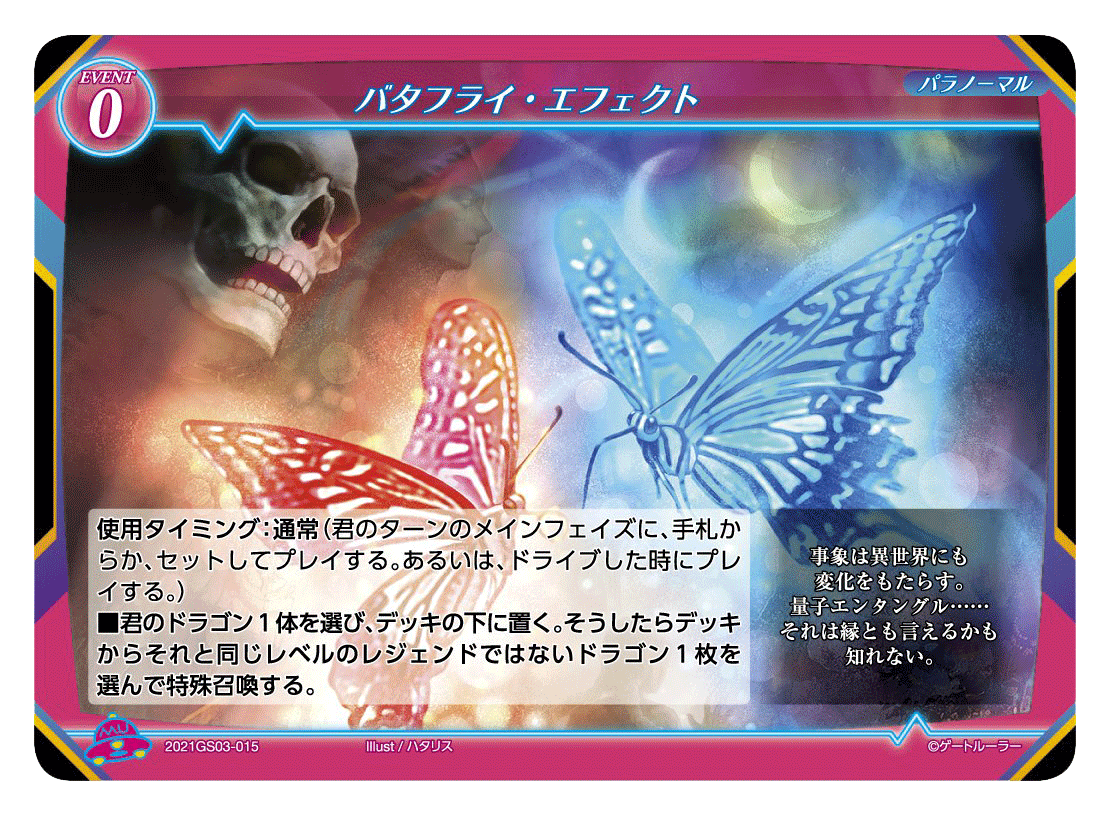 Butterfly Effect
Card Number: 2021GS03-015
Faction: Wonderverse
Card Type: Event
Level: 0
Attribute(s): Paranormal
Effect: Use Timing: Normal
■ Choose 1 Dragon on your field, and send it to the bottom of the deck. Then, choose 1 non-Legend Dragon of the same Level from your deck, and special summon it.
Flavor Text: Phenomenon that can bring about change in another world. Quantum Entanglement...you could call it fate.

The effect of the new card "Butterfly Effect" is now revealed.

Its a card that allows you to trade a Dragon on your field for another in your deck, which allows you to do things like activating effects that activate when special summoned or when the unit enters the field.

A very versatile Dragon support card! Search cards of any kind have been very rare in Gate Ruler, with really only Genesis Summoning, Hastur's very specific search, and Voltona's selective mill to speak of, so that aspect on its own is powerful, but the card is also Level 0, and of course allows you to activate special summon effects of any unit you might need of the appropriate level.

You can use it to send a Dragon back to deck for later reuse, get a Level 2 Dragon out for no energy at all using "Calico Cait Sith", allow you to tech more situational Dragon effects to bring out as you need it, and many more applications.

From the cards already revealed, you can see that the Starter Deck "With the Dragon King" summons dragons one after another and activating effects with the condition "When this enters the field". Its a technical deck that returns Dragons to the deck and resummoning them, and using their effects again and again based on the board state.

According to the developers, there are many more Dragons in the deck with "When this is special summoned" effects, and will have cards that do things like recovering life and destroying set cards.

I wonder how many people will build Cat-Dragon decks that can do evil plays.

But there aren't any Familiars in Wonderverse.