Posted on 2nd August, 2020 at 8:36pm CST
This article has not been updated since September 12th, and with the official rules now released, the information here is outdated but is being left up for archival purposes.

The game has been stated to be a reworked version of Dominator, so the partial playmat for Dominator that Ikeda released at one point, in tandem with one image of a game in motion from the Gate Ruler test play gives us a strong idea of the basic playing field.

It has a Ruler zone where the Flag/Item was in Buddyfight, and based on the partial information we had on the Avatar mechanic in Dominator, they will have an inherent Attack, Strike, and Life stat. The first two imply that Rulers will be able to attack units and the opponent, much like the Items in Buddyfight. 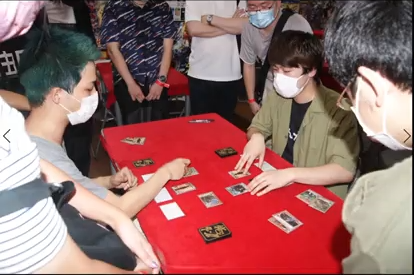 The Spell equivalent in this game, Event cards are landscape cards, like Impacts in Buddyfight and Climaxes in Weiss. While there are only 2 zones for them on the Dominator playmat, the Gate Ruler test play image clearly shows that has been upgraded to 3 zones. 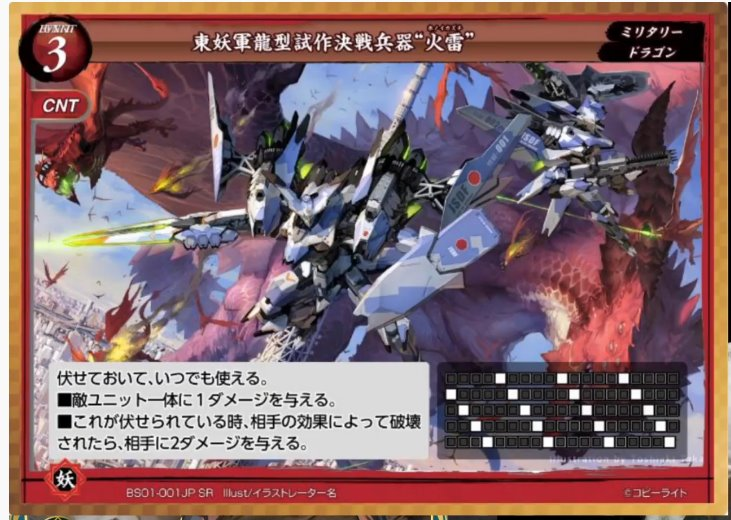 Based on the text from the sample cards (Read more about them here) there appear to be two kinds of Event cards. Some, like the Red/Gold one we've pictured here, have an effect that allows them to be placed face down and activated later, like Traps in Yu-Gi-Oh! Assumedly this will be the way to use Events as Counter/Instant speed. Others, like the Pink one on the right don't have that ability and thus assumedly can only be played on your own turn and are thus played directly from the player's hand. Interestingly, we also see alternative effects that activate if an Event is destroyed while face down, it'll be interesting to see how common of a design this is. 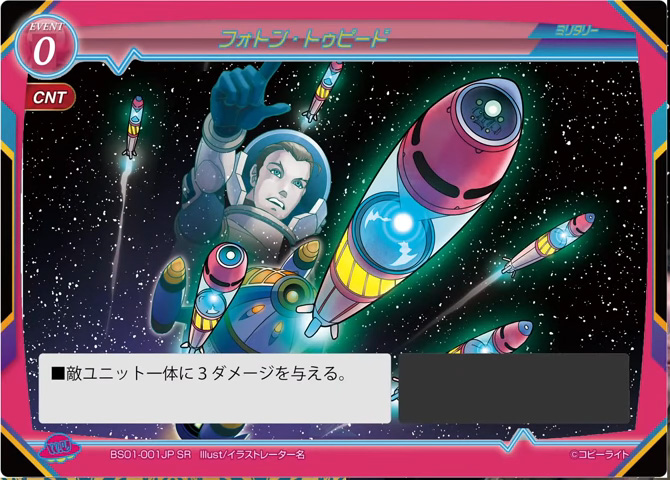 The Damage zone appears to be card-based. Since Dominator's Avatars (and likely Gate Ruler's Ruler cards) have different Life numbers, its likely that the amount of damage you can take before losing differs depending on your Ruler. Since in the test play image the cards in the Damage zone are face-up, and Ikeda has confirmed there will be no Shields, it seems likely this mechanic will work similarly to Cardfight!! Vanguard's damage. This could also mean there is a costing mechanic like Counterblasts, where you can flip cards in the Damage zone face-down to pay for effects. 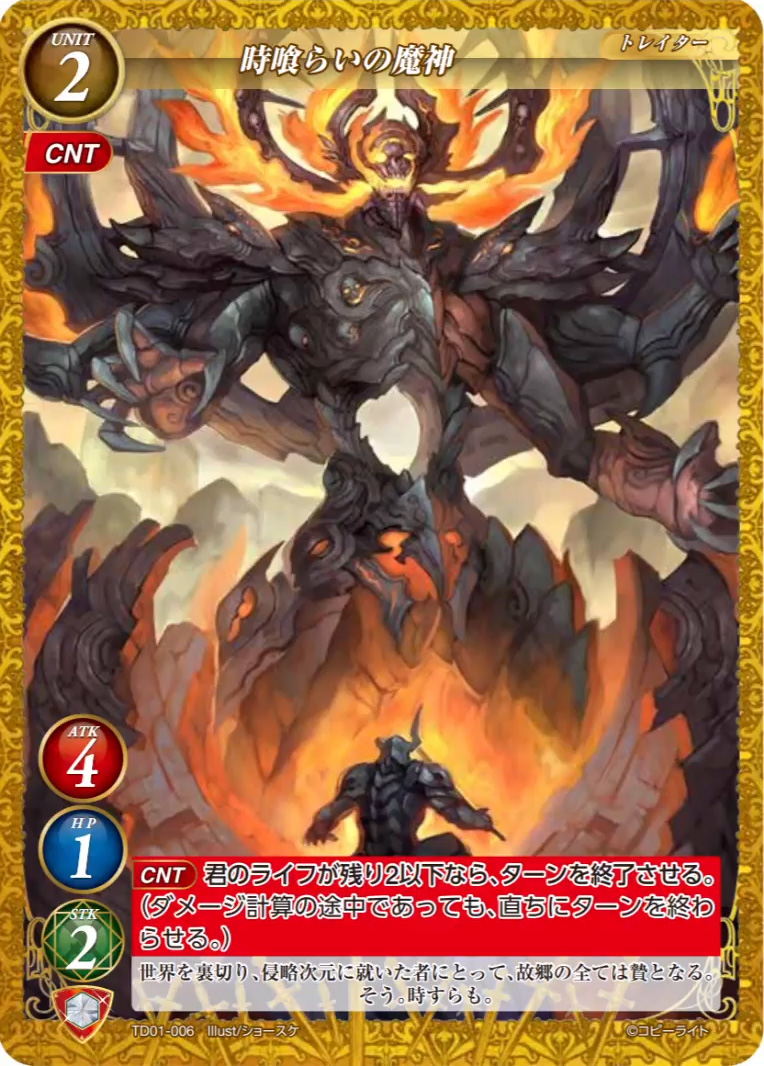 The [CNT] (Counter) timing we've seen on several cards is also likely tied to damage, probably working similarly to Damage triggers. This is thought because these effects get a different background color for their section of the text box, several of them simply say to just use one of the card's other abilities (which is fairly commonly seen on trigger type effects in other TCGs).

Especially notable is the effect of "Time-eating Genie", which is pictured here. (Read more here) It has the [CNT] effect to end the turn if you have 2 life or less, with reminder text stating the turn is ended immediately if in the middle of damage calculation. Other possible interpretations of this keyword, such as Continuous or Counter (as in Buddyfight's Counter, which allowed a card/effect to be used at Instant speed), would make this a broken effect that allows you to always immediately end your opponent's turn if you have 2 life or less.

However, as an effect triggered by this card being damaged, it makes sense, as it would then be a randomly (well not completely, as deck manipulation is already shown to exist) activated effect that, requiring you to have so few life remaining, would have few chances to activate. It also makes sense of the reminder text, as if it was the 1st damage in an attack that would deal multiple damage, a reminder that it interrupts further damage calculation is important. Lastly, while the mention of "2 life or less" may not typically be syntax used in a TCG with a Vanguard-style Damage system, if the Rulers have different Life totals, it would make sense to reference this way, as having the condition be "If you have 5 damage or more" could exclude low life Rulers entirely from using the card or make it too easily accessible to high life Rulers. 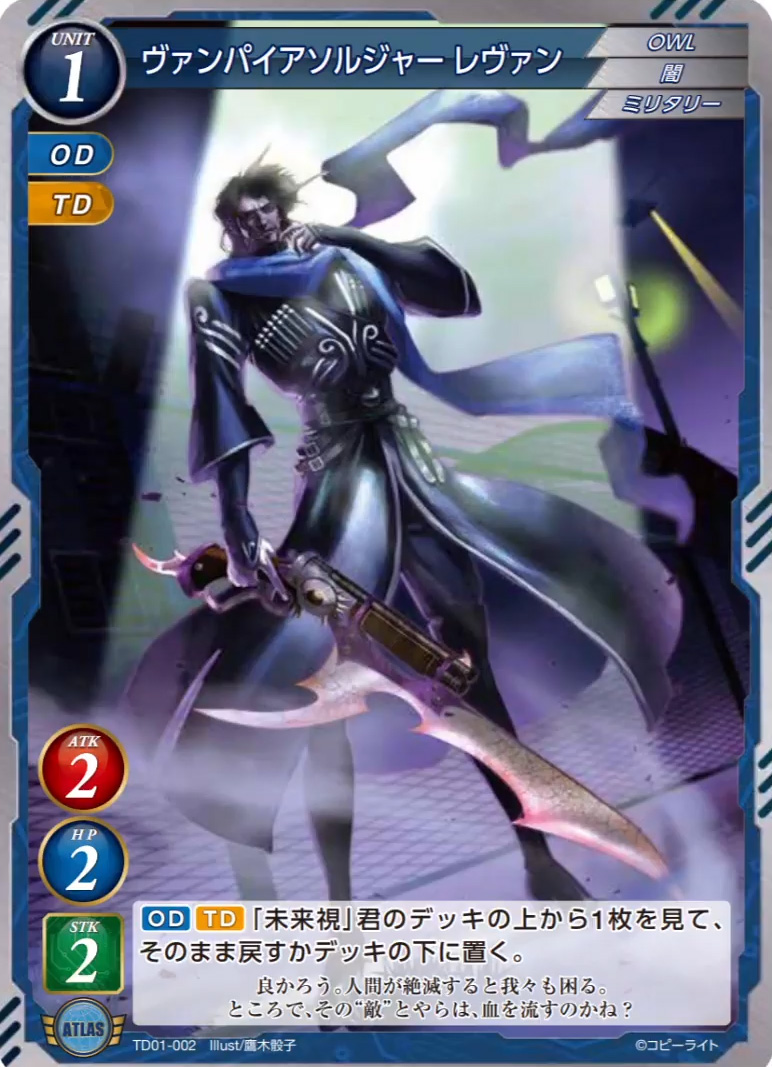 Thanks to the Sample cards, we have also seen the reminder texts for both the [TD] (Touchdown) and [OD] (Overdrive) timings. Respectively, they are (TD is an effect that activates when you play from your hand) and (OD is an effect that activates when you play a Drive). [TD] is simply the standard ETB (enters the battlefield) effect type that is standard in every TCG, just reduced to a symbol for saved space. As for [OD], we have no clue at this time what a Drive is. Word association could connect it to Vanguard, especially since the game seems to already borrowing Vanguard's damage mechanics, which would make these effects that activate when you drive check the cards, but that is pure assumption currently.

Next, the stats on Units. On the bottom left of each Unit we see an Attack, HP, and Strike stat. On the Sample cards these were instead labeled Attack, Defense, and Critical. From this, we can safely assume that Strike functions like Critical did in Buddyfight and Vanguard, and is the stat used to determine how much damage is dealt when the Unit attacks a player. Meanwhile, we know HP will not function quite the same as Defense, and instead will be a health stat (fitting its name change to HP) that automatically regenerates at the end of the turn like in Magic: the Gathering. In practice, this doesn't seem much different from Buddyfight's Defense, as players will still be able to "link attack" to take down a Unit with multiple smaller Units. Its yet to be seen if the attacked unit will deal damage back to the attacker like in Magic: the Gathering and Duel Masters. 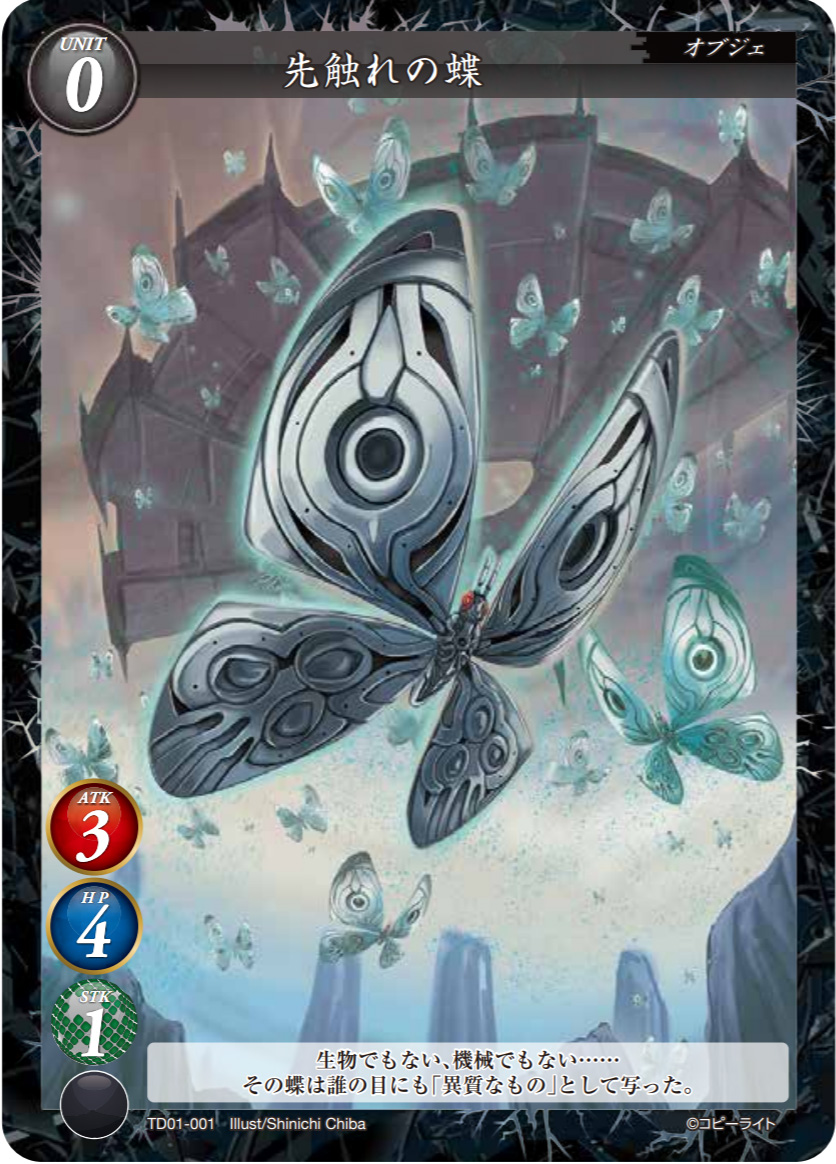 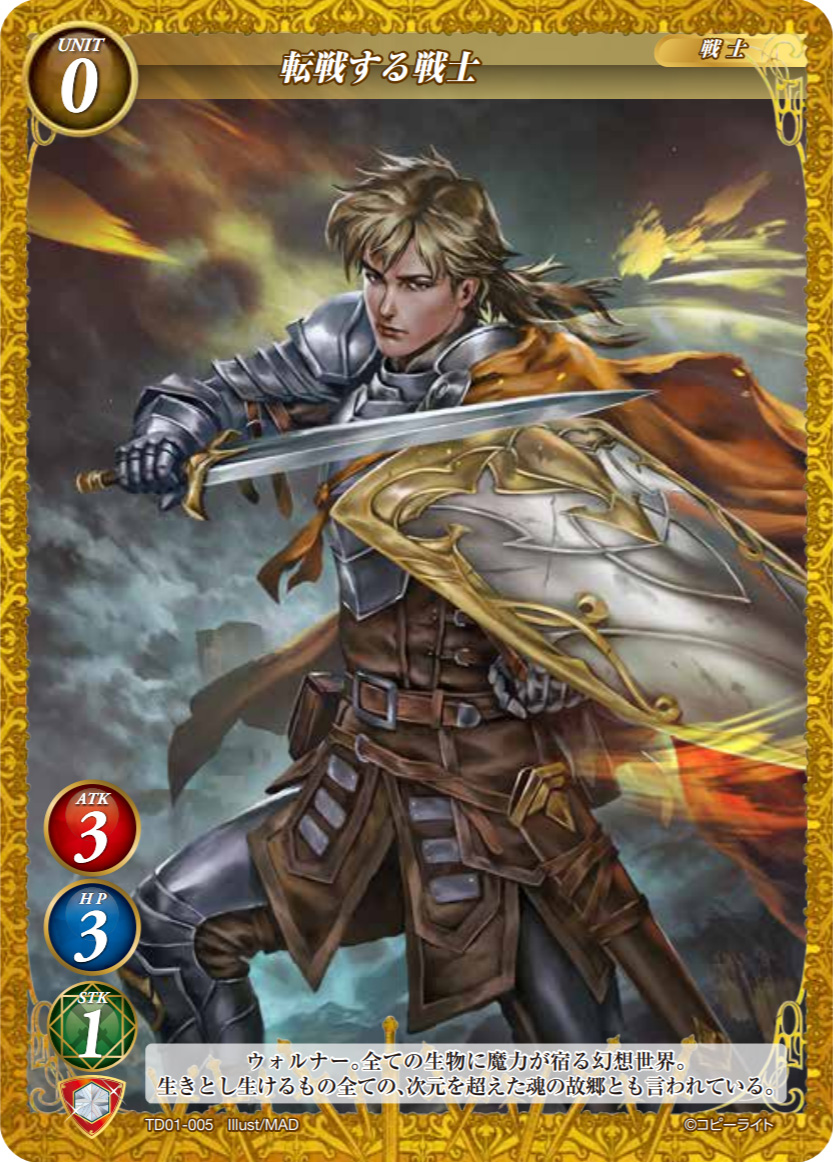 Continuing on stats, we can see through these two cards here (Omen Butterfly and Warriors in Continuous Battle) that different Factions will get different stat allocations, very similarly to Future Card Buddyfight.

Last up, let's talk about the number in the top left with the card's type. Due to being referenced on some of the Sample cards, we know that this is the Level. What we've seen in the Test Play image and the Dominator playmat doesn't seem to indicate any sort of Mana Zone, so it seems unlikely that this is a cost. In addition, this number doesn't seem to go high enough to fit a Mana cost as the numbers on the Sample cards designed to test the frame only go to 3. Though it may go higher than 3, its unlikely they go up to 8, as that would likely be seen on the Sample cards since its the single number that tends to take the most space and so its the one to test (which would be why we see so many Sample cards with 8/8/8 stat lines). This also cannot be the Size mechanic from Buddyfight, as it also appears on Event cards.

What seems most likely is there is a Level/Grade mechanic like Wixoss and Vanguard, where your Ruler levels up each turn, and you can only play Units and Events of its current Level or lower. But ultimately this is also still pure speculation, so take this with a grain of salt.

Lastly, a point we want to make is that Dominator was touted as a game where different styles of TCGs would go up against each other, and similar language has been used to describe Gate Ruler. In Dominator, it seemed they way this was going to be done is different Rulers would modify the rules to resemble different TCGs. This could also apply in Gate Ruler, so its possible the basic rules of the game could be altered relatively drastically based on the Ruler you use. This has already been partially hinted by Ikeda, who when he deconfirmed a Shield system, he also specifically said "yet" and noted that Gate Ruler is an "evolving and expanding TCG".

-Gate Ruler will use a 5 color system, similar to Magic: the Gathering and Duel Masters, where the 5 colors are called ATLAS, Volnar, Yomajin Front, Wonderverse, and Exvaders. (Source) (Read more about the lore of the 5 factions)

-Damage on Units will be healed at the end of turn, like in Magic: the Gathering. (Source)

-Ikeda has mentioned that "units cannot be played side by side". This likely means there are a finite number of Unit zones, like Cardfight!! Vanguard, Future Card Buddyfight, and Yu-Gi-Oh! and not an infinite shared zone like in Magic: the Gathering or Duel Masters (Source)

-In Gate Ruler, you will draw 2 cards at the beginning of each turn, like Wixoss but unlike most other TCGs. (Source)

-The average length of each game is similar to Future Card Buddyfight during the 1st year. (Source)

-There will be a giant robot combining deck. (Source)

-For the time being, Gate Ruler does not have a Shield system like Duel Masters and the new Digimon TCG (Source)

-The 1st set will be relatively plain, to enjoy the basics of the game, but the game will become flashier in the 2nd set, 3rd set, and onwards. (Source)

-When discussing Cait Sith, Ikeda mentioned it would have a common ability called "Familia" that allows a card to be treated as any Race when performing a Special Summon with it as material. This likely suggests that there will be either an Extra Deck mechanic similar to Yu-Gi-Oh's, or an Evolution mechanic like Duel Master's. (Source)

-There will be a type of card called Legends, which you can only run 1 copy of in your deck. The number of different Legends a deck can be contain will be determined by your Ruler. (Read more)

-There will be a Special Summon mechanic where if certain Units are summoned via it they will receive special effects. The different factions will receive unique methods of Special Summoning, with Volnar's being called "Abyss Summon" and seems to use the discard pile in some way to enable it. (Read more here and here)

-Ikeda seems to have referenced the "first strike" and "vigilance" keywords from MtG when describing the kinds of effects cards will have, so it would seem these MtG keywords will appear in Gate Ruler. (Read more)

-By the presence of first strike, we can assume that in combat, both creatures in battle deal damage to each other, very different from how Buddyfight worked. (Read more)

-By the presence of vigilance, it can be assumed that creatures will be able to block. Its unclear whether this will be an innate ability of all cards like in Magic the Gathering or if it will be an ability specific to certain cards like in Duel Masters. Regardless, having standing units be able to block attacks, in addition to the Buddyfight mechanic of needing to open the center line to attack directly, is sure to create an interesting game with tons of defensive potential. (Read more)

-With the exception of Exvaders, Ikeda has now detailed how each Faction will play:
Edited by HunterSerge on 26th November, 2020 at 12:55pm CST